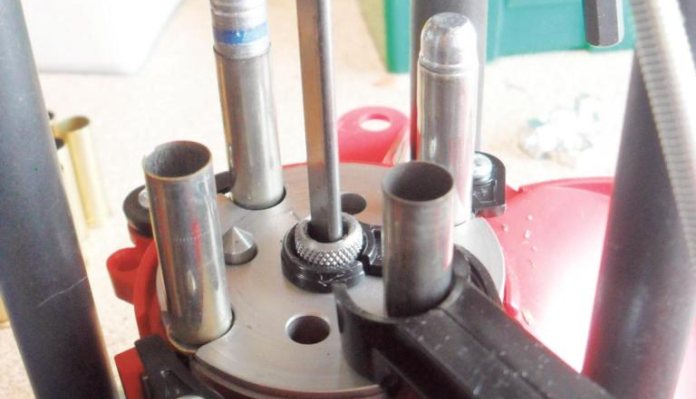 Like most shooters that reload, I started with a single stage press and then moved on to a turret press when I became more familiar with the various stages in the reloading process. The turret press gives me all the speed I need and still allows me to reload one stage at a time, so I can keep an eye on things. The progressive presses never appealed, because I did not feel the associated need for speed or like the idea of several stages happening at once – I always considered this to be a recipe for stages malfunctioning and it going unnoticed. The basic principal of progressive presses, regardless of brand, is that they all progressively process the cases at multiple stations with each station performing one or more operation per stroke. Once each station on the press is occupied by a case, you will produce a completed round every time you cycle the press. For me, this has always been too much going on at once and the progressive presses have become too sophisticated for the user to both set up and keep under control. Recently, with the arrival of the new Lee Breech Lock Pro, I have had a rethink and changed my reloading method.

Lee’s existing range of progressive presses have been around for a long time, albeit with some modifications, and it has been over 25-years since they added a completely new model to this range. With the introduction of the Auto Breech Lock Pro, rather than raise the level of sophistication of their top end model, they have added a LESS sophisticated press, which sits rather nicely in between their turret presses and the existing range of progressive presses. In doing this, they have stepped back from the complex features on many progressive presses and produced a more basic option. The most obvious example is the priming operation, where they have gone back to a simple priming arm and cup, which takes one primer at a time. The primer can be placed by hand or placed into the cup using the optional Lee Safety prime tool.

Other progressive presses need so many adjustments and have so many integrated functions that they have to be shipped partially set up in one calibre and switching calibres is both complicated and time consuming. With the new Auto Breech Lock Pro, all of that is gone.

Opening the box, the first thing that hits you is how compact the press is. Made predominantly of steel, it is weighty and very sturdy. The second noticeable feature is the large area of plastic on the carrier. This was initially a concern, with plastic perhaps not being the best material for this component; but, on closer inspection, the carrier itself is actually steel. The plastic is merely a ‘coating’ intended to offer a bearing surface between the carrier and the shell plate and provide a seamless slide for the finished rounds to exit the press. As the plastic part is not subject to any force, there won’t be an issue in terms of wear and it is actually a really clever use of a combination of materials.

As well as the press, the box holds large and small priming tools, the hex keys required for assembly, a bin to catch completed rounds and a spent primer feed tube, to allow you to direct them straight into a bin. All you need to add is the appropriate shell plate and a set of dies. You can of course add ‘optional extras’, like a Safety prime and a powder measure. The press holds four dies, allowing you to use a factory crimp die if required and breech lock bushings are included for fast die changeovers.

Once the press is fixed down, the next stage is to install the shell plate, which is achieved really quickly through the top of the press. The lock ring eliminator (already installed in one of the die positions) is removed, which in turn allows the index rod and case ejector to be lifted out. Then, with the carrier raised to the midstroke position, the shell plate is installed and tightened in position with the supplied hex tool. With the carrier returned to the bottom position, the index rod, case ejector and lock ring eliminator are replaced. The correct priming tool is dropped into position and the individual case retainers at each shell plate position are pushed into place. Dies are installed and adjusted in accordance with the instructions and you are ready to go; it really is as simple as it sounds.

With a Lee Pro Auto-Disk powder measure and a set of .357 dies installed, the press was ready to go. The first issue to overcome was actually getting used to a new reloading cycle, having spent over 20-years of feeding cases, primers and bullets in a particular order. The auto breech lock press requires a different routine. With the carrier in the down position, a bullet is placed onto a case; after the carrier is raised, a primer and a case are inserted into the appropriate positions. Cases are dropped through an opening in the head of the press and they are pushed into the shell plate by a spring-powered slider block. This new process is very simple, but my well-practiced reloading routine proved hard to change. Missing cases, and/or primers and/or bullets occurred numerous times and was frustrating but NOT the fault of the press; this is entirely due to trying to overcome decades of learnt behaviour. A lot of patience was required to get used to the new cycle, and suddenly it all worked like a dream and completed rounds were tumbling into the waiting bin. With powder charging occurring at the front of the press, where you can see the auto disk slide across and drop the charge, and priming still being ‘feelable’, you do feel that you are in control of what is going on, which is very reassuring.

This is a great press and represents fantastic value for money. It does not carry the big price tag of other progressive presses or have the very complex features that make them overly complicated. You can even remove the auto indexing function and use it as a single stage press, making it suitable as a ‘first press’ for anyone new to reloading. You could use the press in this way to get used to reloading and then reinstall the indexing rod when you are ready to go fully progressive.

This would save having to buy a single stage press and then buying a progressive one later, a significant cost saving. The build quality is good, as you would expect from Lee, and setting it up could not be easier.

For anyone more experienced in reloading, it presents the best way to either move on from a turret press or step back from a complicated, and hard to set up, progressive press that they might be using and get something more user friendly.

I know many shooters who find their progressive presses problematic and hard to adjust with frequent ‘breakdowns’ and this new product is a good alternative. Additional features, like the wooden roller handle make it a dream to use and it certainly seems strong and durable. After over two decades of using a turret press, I have now gone progressive; that is how good this press is. Definitely something worth checking out