Reloading: All in the Balance 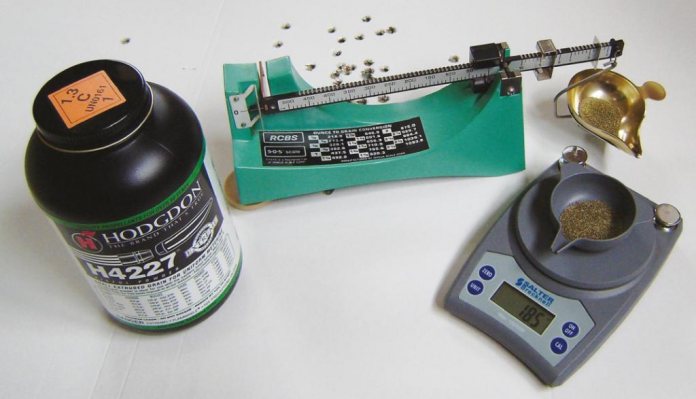 Let me begin by finishing last month’s article! Finger trouble cocked up part of an important paragraph. I’ll paraphrase: Keeping the ram and rotating parts of the press in good working order and free from damage requires regular housekeeping. Removing the primer residues and other abrasive soiling should be followed by careful lubrication. Apply either a ‘dry’ lube, such as graphite or moly dust, or a light wipe with a fine machine oil. Remember that crud can stick to oil and other ‘wet’ lubes, increasing the necessary cleaning frequency!

In weight we trust?

Okey dokey, on to this month. The accurate weighing of cases, bullets and more importantly, powder charges is mostly taken as a given. We assume that our measuring machines are telling us the truth – time after time. But is that always the case?
These days, most of us own and use both mechanical beam balances and electronic, digital load cell devices. Unlike the rather agricultural construction of most of our reloading workshop equipment, these are extremely delicate instruments. My original Frankford Arsenal DS-750 failed to survive a modest attack of gravity and a slight wetting a year or so ago and the beam balance of a student on an NRA pistol reloading course (a long time ago) could have injured or killed him had we not discovered the damage caused by his OCD mum. She’d ‘re-assembled’ it after knocking it from his bench during her daily cleaning operations!

The same - but different

Just to be a bit pedantic, the two types of scale perform their basic function in different ways, the electronic being a true measuring machine (it tells you what the actual weight is) whilst the beam is a comparator (showing you whether your sample is the same as the scale setting, or not). Indeed, this difference in function can be of benefit for particular reloading applications. Loading ‘on the range’ when exposed to draughts makes the use of a beam balance almost impossible. Furthermore, batch weighing bullets or cases is fiddly and slow with the beam scale. However, when trickling precision powder charges, a well set up beam balance gives me a ‘real time’ indication of the change in weight. Whereas there is sometimes a slight ‘hang time’ from the electronic device, possibly resulting in an overcharge.

The operating environment can have quite an impact upon our measuring devices. Temperature and humidity can play a part in the accuracy of both types but can have a greater impact upon the load cell designs. Strong magnetic fields, vibration and the flatness of the supporting surface are also capable of influencing their accuracy and consistency. All things being equal, I can measure to around half of a tenth of a grain (0.05-grain) with my RCBS 5-0-5 scale, the oldest yet most trusted in my collection. In use, the beam scale has excellent repeatability and is drift-free, whereas all my electronic models, whilst claiming accuracies of better than 0.02-grain, are prone to drift and depending upon the way they are being used, algorithm induced over corrections.

On most of the beam devices that I have encountered, the angle of dangle on the axis of the beam is controlled by a thumbwheel. When setting up the RCBS 5-0-5, the three poises are moved to zero, the pan attached, and the thumb-wheel turned until the scale pointer is also at zero. However, there is no means of checking the other axis. If the scale body is tilted excessively, then the load on the pivot blades becomes uneven and the movement of the beam impaired. The blades on the scale sit in fine notches in agate bearing material and must be kept clean and dry. NEVER apply any form of lube. Hanging from the end of the beam is the hook for the pan. This hook balances on a vulnerable knife edge pivot and damage to it is often overlooked as a cause of poor scale performance. Damping of the beam is magnetic, requiring the device to be kept away from strong magnetic influences, such as speakers.

When setting up the scale, either for the first time, after storage or a protracted period unused, employ a check weight set to confirm the accuracy of the scale across a range of weights. If you keep it assembled on the bench, use a proprietary cover or if all else fails, a cloth. For added safety, store it beyond the reach of inquisitive ankle biters.

Adding volts and teslas to weighing

The load cell design incorporated in most electronic models are towards the ‘budget’ end of the price range. Furthermore, the potentially tiny changes in weight produce only minute differences in cell voltage. For this reason, many manufacturers use software mathematics (algorithms) to refine the output that we see on the screen. (A bit like the difference between pathetic digital zoom, created by software, and true physical zoom in camera lenses). It often ‘smooths’ the output from the load cell and applies a ‘predictive’ element to it. This is not only to enhance the actual output from the load cell but to counter the undesirable effects of external and internal electronic ‘noise’ and magnetic influences.

The problem really starts when instead of plonking an object of finite weight on the pan, such as a check weight, case or bullet, you begin trickling a stream of powder kernels into the part charged pan. In these instances, the smart software may become your worst enemy, as it can read this microscopic change in weight (one flake or kernel of powder) as electronic drift and tries to correct it. Not good. The scale can, for a few additional kernels, maintain the same reading until ‘force majeure’ – it recognises that a change in weight has really taken place. By which time, the weight in the pan may well have exceeded the desired value. It follows that it is easier and safer to trickle an accurate and CONSISTENT weight of propellant on a balance beam scale than any of the budget electronics!