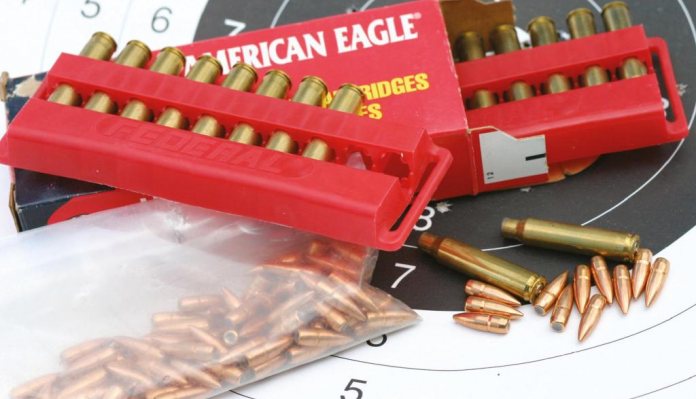 Some reloading projects are easy to plan, others take forever and are a pain. This is one of the latter. I have a trial tub of Hodgdon CFE 223 with the intention of testing the claims regarding its ability to remove copper fouling. The first hurdle was the fact that there is a de facto ban on handloading and handloaded ammo (non-CIP) in Belgium, the location of my preferred test arm.

This relatively fine, easy metering, flattened ball powder was first announced at the end of 2011 and launched at SHOT Show 2012 with supplies reaching these shores about a year later. The nomenclature CFE standing for Copper Fouling Eraser. Whilst it implied that it was solely intended for use in .223 Remington, this is a throwback to the fact that it was developed for use in the production of 5.56mm ammo for use by the American Military. Indeed, its practical range of application is much wider. Hodgdon also quote loads for .204 Ruger, .222 Remington, .22-250 Remington, .243 Winchester, .257 Roberts and onwards to .308 Winchester, .30-06, 8 x 57mm Mauser and even .338 Federal.

Why make so much fuss about copper removal? Well, a microscopic gilding metal trace will be left in the barrel after each shot, that builds up. The extent and rate depending upon the quality and condition of the bore and the design of the ammo. As it builds, so the accuracy of the rifle drops off. If you’re dropping the odd deer, then the extent of the fouling is unlikely to be an issue as a regular opportunity to thoroughly clean the barrel (and the rest of the arm) should present itself. In a battlefield environment, this may not be the case.

The process by which the CFE powders achieve their ability is a bit of a dark secret, as the list of primary ingredients published on the National Center for Forensic Science database looks pretty standard, containing Nitroglycerine, Diphenylamine, Ethyl Centralite (Diethyldiphenylurea) and Dibutyl Phthalate. Hodgdons’ MSDA (Material Data Safety Sheet) declares it’s produced by St. Marks Powder, a division of General Dynamics, but even this full list of ingredients including graphite, rosin, potassium nitrate, potassium sulphate and ethyl acetate shows nothing out of the ordinary. If, as seems likely, it is a magic ingredient then the only listed one that might qualify is Tin Dioxide; but that and Bismuth do appear in other propellant recipes.

The plan of action was simple. Take a .223 Rem/5.56 NATO chambered rifle with a standard steel (as opposed to stainless) barrel, scrub it until it bled and then conduct some comparative tests. First up after cleaning, were 20-rounds of British, 1998 L2A2 Ball. Thereafter, the test batches each comprised 25-rounds using a cheap 55-grain FMJ atop various brands of propellant powder, each of the charges loaded to give a similar chamber/barrel pressure. As a secondary test, cartridges containing varying loads of CFE223 were fired to see if barrel pressure/ scouring were a factor. Between each batch, the bore was to be cleansed until the patch came out clean. An initial test, prior to the scrub, involved firing a batch of CFE223 loaded ammo through the previously (very) copper/lead soiled barrel, to see if it could successfully clean existing residues. As the test involved a lot of reloading and range time, the accuracy, velocity and other performance factors were ignored.

Ingredients comprised once-fired American Eagle brass, Federal #205 Small Rifle primers and 55-grain FMJ PPU pills. Powders were chosen to reflect as many makers and types as possible from those that I had in stock or could scrounge at the right price! In addition to CFE223, I used Lovex 73.5, Reload Swiss RS40, IMR 4895, Ramshot X-Terminator and Alliant RL10X. Ah yes, the rifle – a scoped, semi-automatic Smith & Wesson M&P15 Sport II. No, for the pedants and snitchers who might be reading this article, that was not in the UK. The 16” barrel had an Armornite® finish, whatever that is? I think it’s Melonite nitriding by another name. When I collected the arm, it was visibly evident that cleaning had not been a part of its history… hence the initial test. For the default batches, the propellant charges were interpolated from the various manuals to give as near to 3000 fps as possible, without running chrono tests and working up the loads. I used 24.5-grains of Lovex 73.5, 23 of Reload Swiss RS40, 24.1of IMR 4895, 22.7 of Ramshot X-Terminator and 21.2 of Alliant RL10X.

So, to the results. On grounds of cost, I elected not to have the barrel cut and sectioned after each test batch! Eyeballing the patches was as good as it got. (My USB micro camera will not fit a .22 bore). The first point to make was that the initial, pre-scrub CFE223 had only a small effect on the ploughed field of a barrel that I inherited. Not a good start. Thereafter, other than the CFE, the variations in the main test were mostly so small that I sought a second opinion to compare them with my observations.

The NATO Ball was remarkably clean; perhaps benefiting from the same magic ingredient! However, this could be a case of comparing apples with pears, as the velocity was markedly greater, reflecting a different working pressure and the bullet design was also different. Of the ‘test’ powders, the Ramshot and Lovex were equal last. The CFE really did earn its title as a copper fouling eraser… but only if you start with a cleanish barrel. Stoking up the CFE charges did not make a perceptible difference to the extent of the cleanliness. In conclusion, I have to say that the claims are justified, but really require much larger batches to ascertain its true value!