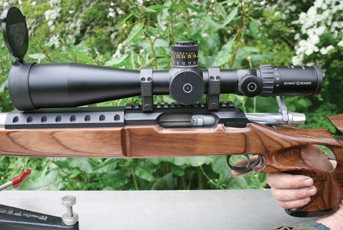 Boys and their toys or is it a mid life crisis or a bit of both? Either way making bigger, noisier and outrageous kit seems to exponentially grow as the hair thins and waist band expands. Rather like pimping your favourite car, a custom project with modified cartridge can satisfy that desire to be different!

The 30-06 has to be one of the best and most versatile cartridges available today; its longevity owes much to its popularity in the States for sure. It’s a great all-rounder and well up for boar and plains game, but really comes alive when you have ‘improved’ it!

We have to thank P O Ackley for his Ackley Improved (AI) 40° shoulder angle idea that has endured to this day and gives less bolt thrust and better case life. The operation makes a great cartridge like the 06 truly phenomenal.  The increase in powder capacity of 2-3 grains is modest but offers better performance especially when you combine it with a longer throat to accommodate one of the high BC specialised bullets. The result - a supreme long range rifle capable of sub-MOA accuracy and 1000-yds + performance with a modest payload of powder compared to some ‘magnums’.

A standard 30-06 typically has a case capacity of 68-grains but seating a heavy long range bullet such as the 208-grain A –Max, 210 Berger or newer/heavier hybrids displaces space for powder if loaded to magazine feed. This is where a custom project allows you to alter parameters to tune a load to your requirements not the manufacturer`s.

In a custom gun you can specify a chamber reamer with a custom throat that allows the bullet to sit farther out from the case so allowing more powder because often a custom action will be used that is a single shot and so a magazine overall length becomes obsolete. This is just half the battle as stock design plays a very important part in stabilising the shot and consistency too.  Barrels can be increased to impractical lengths on a sporting arm, which on this type of rifle means greatly enhanced ballistics.

I use Steve Bowers for by custom projects these days, primarily because he’s a superb engineer and also has an interest in long range varminting. His background allows him to make anything and he wanted a rifle that fitted all the above criteria and was just that little bit different.

Sourcing the raw materials is always fun and none more so than on this project. The easiest part was a Stiller Precision Viper model stainless steel action of benchrest quality. It has an integral Picatinny rail and is configured in right hand bolt, left hand ejection port for ease of loading whilst shooting off a bench. It’s good looking too with a spiral fluted bolt, tear drop extended knob and a faceted shroud. To this a Benchrest Jewell trigger is fitted, there’s no safety and a 6oz trigger pull to assure accuracy potential.

The match-grade, Walther, stainless steel barrel was a monster at 34”! It shows 1 in 10”, 6-groove rifling twist to stabilise those big old .30 cal bullets. Steve then centred the barrel from both ends about the bore axis and ground the outside diameter to exactly 1.350” and then the taper angle to muzzle profile for a 1.00” muzzle O/D. There’s a 6” re-enforce, the reason will be revealed later! Chambering and tenon work probably the most important was done by clocking up and dialling in to ensure absolute zero between bore axis and the barrels O/D.

The .30-06 AI reamer from Precision Tool and Gauge was specified with a 230 thou free bore with a 2° lead angle and was throated for 210-grain Berger bullets. The really interesting bit was the bedding block system. Most rifles are bedded around the action with some form of synthetic compound or pillars. However the use of a block that attaches to the barrel just forward of the receiver to isolate the forward barrel and keep the action ‘floating’ are becoming popular in long range bench rest competitors.

Steve wanted to prove that by actually bedding both block and action you get an extremely stiff unerring artillery piece when fired and one that will retain zero in all conditions and prolonged firing sessions. He made a two-piece, 6” bedding block of Duralumin, stress relieved and machine rough bored screwed together with 8 x M4 screws per side. It is then set out on a horizontal boring machine to jig bore the inner bore for a size for size fit with the barrels O/D of 1.350”. This is then bedded to the stock via 3x 8mm screws in 1” pillars,  plus the two action screws so five precise fixtures.

All this work would be for nothing if it was not for a good stock design. Steve uses his ever popular in house thumbhole design with a few quirks to improve performance. All are handmade and start life as a laminated two tone Birch wood blank. Rob Lebster, Steve’s stocker, rough cuts the blank to pro? le and then pantographs out the sculpting from the reference stock. The inletting is so precise as to be almost an air ? t. The action is bedded using Steve`s own bedding compound and is skimmed at least three times to achieve perfection. The forend is actually quite slim for what is essentially a long range weapon but its pro? le is associated to the butts so it ‘rides’ the bags when ? red.

There is also a rear hook to engage the supporting arm from the bench for stability and the cheekpiece is adjustable on two spigots with a single locking nut. Adding to the adjustability is a Tubb`s, 3-Way, adjustable recoil pad further enhancing comfort and ultimately accuracy potential. The thumbhole is crafted to an individual’s hand dimensions, with a ? nger support and grooves in what is a quite upright posture and a nice ? nal touch are the pistol grip and end caps ? nished in Marble ebony.

Now the interesting stuff, shooting it! A superb Schmidt and Bender PM2 scope was ? tted, so its 5-25x56mm and double turn elevation adjustments meant excellent clarity, plenty of magni? cation and also, crucially, elevation adjustment for long range sniping. This was secured in a set of Badger Ordnance rings.

Virgin .30-06 Norma brass was used and a ? re forming load of 56 grains of RL22 under a Berger 210- grain Match VLD bullet and Federal match primer popped out the cases to the magic Ackley pro? le with 40° shoulder angle and parallel side walls - lovely.

Due to the long range application, Berger 210s were the primary choice however their newer 230-grain Hybrid are under investigation too. I like Hornady 208-grain A-MAX also, but Steve wanted the Berger’s, so there. Importantly the Berger’s were seated 60 thou off the lands for best performance.

As you can imagine the ri? e is dead on ? ring, very little recoil to disturb the sight picture and so you can spot your shots and the velocity achieved from only 56-grains of RL17 to achieve 2821 fps is seriously impressive.

What you have is a super accurate, consistent and easy ri? e to shoot, whether in competition or Varminting that gives magnum velocities without the problems with magnum powder capacities eroding your precious barrels throat and ri? ing.

Steve has also proved that bedding block ri? es shoot better with the whole action and bedding block actually bedded as one to the stock. 6.5mmx284 and 6.5mmx47 L versions have also been made for customers, each one being individually crafted to their new owners design. Price? Well you have to ask Steve as every part can be chosen by you. But what you get is an astonishingly accurate ri? e with a novel bedding block design, all made in England - perfect.