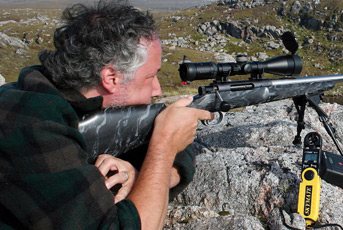 Most factory calibres will get the job done, but sometimes it’s nice to own something different. I quite fancied creating an efficient cartridge using an existing parent case that would be in a deer calibre but could also double as a fox/long range round. Also it should be economical on powder and provide good velocity from a short 18” barrel.

At 18” it allows a muzzle-mounted moddy without significantly increasing the overall length of the rifle. So making a practical deer and fox gun. Calibre choice was settled on as 6.5mm due to my liking for the .260 Remington and regard for the venerable 6.5x55.

I had to find a parent case allowing maximum internal capacity that would burn efficiently in a short barrel but still provide safe pressures and good ballistics. Lapua 6.5x284 brass fitted the bill; when reformed to a more squat format with highly efficient internal combustion chamber. The difficulty was in the case forming that would need a series of forming and final loading and bump dies.

I drew up a spec and sent it to Pacific Tool and Gauge in the States to have a chamber reamer made with the correct throat for a 120-grain bullet. I also ordered a Walther, match-grade stainless steel barrel with a varmint custom profile un-chambered in 1 in 8 twist. It would be threaded to fit the switch barrel RPA Quadlite rifle that I use for calibre testing. It proved so efficient I had a second 28” barrel made up.

The parent case is 2.160” long with a 35° shoulder that burns 49-grains of powder to push a 129 or 130-grain bullet at 2850 fps/2327 ft/lbs from a 24” barrel. A mighty fine cartridge but known for shorter than average barrel life! I wanted to achieve more realistic powder consumption that was kinder on the bore, yet still turn out something that would send a 120-grain bullet out of that short barrel at 2800 fps/2090 ft/lbs. Case length would be 1.88” but have a more parallel profile and still keep the steep shoulder angles to decrease stretching. With the short, boxy internal chamber allowing good burn characteristics and so achieve maximum ballistic potential.

How is this possible? Certain calibres have a finite powder charge that works best within that calibre range, whereas the 6.5x284 is a little ‘over-bored’, the Rapier is just about right… well that was the theory.

A series of four forming dies are used to gradually reduce the shoulder and neck junction back to its final position whilst reforming the shoulder angle and leaving a long neck for trimming.

The Rapier utilises a long, 0.337” neck not only for bullet support but to ensure proper combustion within the case for as long as possible. After Die 3 the case is trimmed to 1.88” then de-burred inside and out. Next the neck is expanded with a mandrel starting with a 6mm then 6.5mm. The reason -  in the forming process the neck is thickened a lot, and a small, internal doughnut forms at the base, the 6mm mandrel smoothes it out and the 6.5mm allows a neck turning mandrel to seat nicely.

Neck turning is essential to remove excess brass, in this cartridge one side is 24 thou thickness so at least half that needs to be removed to the tension that I wanted. Because the chamber dimensions of the reamer is 0.2904” I needed to turn the necks to allow a clearance for bullet release of at least 2 thou i.e. a thou a side minimum. I therefore neck turned to 0.287” and then when a 120-grain Sierra ProHunter bullet is seated the neck’s O/D is 0.288” giving me the minimum requirements.

Die 4 is cut with the finishing reamer and is used as a true up die and a modified 6.5x284 body die ensures it chambers. Wilson die blanks were re-chambered so that each reload was as consistent and accurate as possible with separate neck bushes.

Powders in the medium burn rate would yield the best results. The light Sierra 85-grain bullets have a nice hollow point and I achieved 3167 fps/1893 ft/lbs with 43-grains of Vit N133 but because of the lack of bearing surface to seat they were a way off the rifling and accuracy was 1”.

The nearest comparisons to the Rapier are the .260 Rem, 6.5x47 Lapua and 6.5mm Creedmoor. But the Rapier gives them all a run for their money! With the lighter bullets it’s a serious longer range fox or varmint round that achieves great ballistics with minimal powder charge and retained down range performance. Here the 120 grain A-MAX is my choice.

The 40-grains of Vit N150 with the 129-grain SST was good for deer with total lethality and minimal carcass damage whilst achieving good penetration and expansion. Long range use would be spoilt for choice but Berger’s 140 VLD`s shot tiny groups. I was suitable pleased with the results but from a practical point of view I know this amount of work and dedication is not for everyone. In truth the 260 Rem and 6.5 Lapua or Creedmoor would easily suffice. Case prep is a serious pain, but at 18” it’s a great woodland or hill deer gun and with the longer tube a static, long range crow sniper, magic!