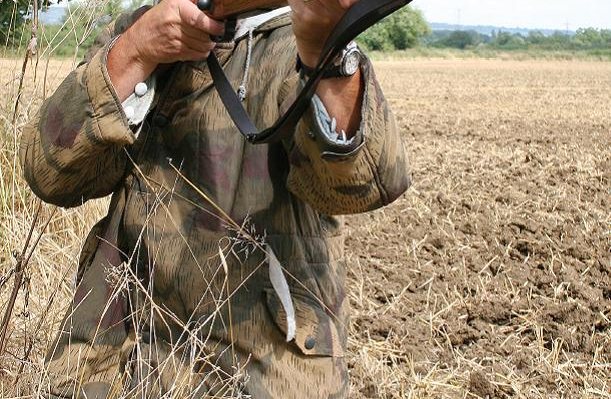 It all started three years ago with a K98 sniper rifle overview, which culminated in Steve Bowers custom building a K98 sniper for me from period parts and then a stalking piece after Muntjac, of all things. I soon realised that not only did I like the K98 for its quirky design, i.e. military for me but the 7.92mm or 8x57mm is such a cracking round. Like the .308, 30-06 or 6.5x55mm, its one of those rounds that will do anything you ask of it and it is very flexible to reload for.

8mm or 0.323 inch is a good bullet size, as it can be run slowly for minimal meat damage for small species deer; or faster for longer-range, or heavy bullets for deeper penetration on larger animals and African game. It does it all with manageable recoil and dependable performance.

Paul Mauser developed the 8x57 for the Model 1888 Mauser rifle. This originally had an 0.318” bullet diameter but in 1905 certain changes was made and the bore diameter was changed to 0.323”, which is now the standard diameter. The Standard military loads use a 197-grain bullet at 2450 fps/626 ft/lbs, which is good enough for all needs.

The case is 2.240”, with a 0.307” neck length and a relatively shallow body taper, from 0.4698 to 0.4340”. H2O capacity is 63-grains on the RWS cases I use, with approx 58-grains of useable space with the bullet seated. Military brass will be different due to wall thickness variations. Barrel twist rates are usually 1 in 9.5”, which is fine for the heaviest bullets used in the 8mm.

This is a very efficient case design that almost perfectly suits the bore size, handling bullet weights from 125 up to 220-grain thumpers, so covering all manner of hunting or target needs. It has also spawned a few calibres of its own; 257 Roberts, 275 Rigby and predates the 30-06 by at least 18 years.

I have been looking at the old .22-8mm as a long range, fast twist varmint round; stay tuned!

The powder choice is easier, as mid range burning rates work best in a 24” barrel! Vit N150, Varget, RL15, IMR 4064 or H4895 work well but faster burners such as Alliant RL 10X are excellent with the 125-grain bullets. H4198 is good for reduced loads, as is Trail Boss or Vit Tin Star and makes any Mauser 8mm a good short range, low noise plinker or trainer.

I had three K98 snipers to choose from this time; firstly was the old K98 project gun, another BNZ 44 rifle fitted with high turret mounts and a classic mil-spec Zeiss Zielvier 4x power scope. This one had a Timney trigger and sniper safety catch fitted also. Secondly, an old BNZ 44 long slide mounted K98, fitted with a Zeiss Zielsech 6x power scope and later a 4x Oigee scope. Last but not least is a second high turret mounted Zeiss Zielvier, this time on a BYF 43 K98 with a near mint bore.

Although these are all K98s with the same barrel dimensions, they all shot differently, which shows well that all rifles have to be tested as a standalone unit and quoted velocities may not reflect a particular gun’s performance. I had bullets from 125 grains to 220 grains, so a nice spectrum of weights but all having expanding heads, so deer legal

Velocities are one thing but accuracy another. With any military rifle it is important to assess the condition of the bore. Results show, that despite the same load, there was quite a big difference between the three rifles. However, accuracy from all three was more than acceptable for deer stalking, even on the smaller species. Data for the 8mm Mauser is good and I used reloading books as well as Quickload and Quicktarget ballistics programs for initial data and to save time and components.

An intermediate bullet was Hornady’s 170-grain round nose Interlock; an old fashioned design but at close range a real deer shocker and low meat damage. Accuracy was hovering around 2” for all three rifles and best load was 52.0 grains of Vit N150 for 2601 fps/2554ft/lbs. Sierra’s 175-grain ProHunter would be a better choice, as a load of 48-grains of H4895 worked wonders and rifles 1 and 3 shot 1.5-1.75”.

Best all-rounder were Hornady’s 195-grain Interlock SPs. These are about perfect weight for the bore and again look just right. They have a BC of 0.410 and although a flat base design they consistently placed 3-shots into 1.25-1.5” at 100 yards. These were my original loads in the first tests and I did not change them. Best load was the 46-grains of good old RL15, my favourite all round powder at 2356 fps/2404 ft/lbs; not quite 2450 fps minimum for Scotland but 47.0 grains was 2407 fps, nearly there.

Best fun and good loads to maintain bore life use reduced, subsonic or lead bullets. I did not test the lead, another day perhaps, but subs and light loads were game on. A reduced load of 24-grains of IMR 4198 with the Hornady Interlock bullet achieves a velocity of 1756, 1697 and 1710 fps from rifles 1, 2 and 3 respectively. Subsonic wise, I could go with the 150-grainers but heavier is better along with faster burning powders. Trail Boss is good and fluffy and fills the case for a small amount of powder, negating the problems with secondary explosion effects. However, I had run out! So my next standby is Vihtavuori Tin Star.

Both the Remington 220 SPs and 195-grain Hornady Interlocks are great performers, the latter offering best accuracy with 1.5-2” groups at 100 yards. Barrel fouling with slow moving heavy bullets was a problem and regular cleaning was necessary for best performance. 10-grains of Tin Star and 195-grain Interlock achieved 1054 fps/481 ft/lbs and was great fun for clanging silhouettes at range, a real test of trajectory and windage adjustment.

It got me thinking, why have I not got a sporting rifle in 8mm, or even an Ackley Improved version? I love the 7.92x33mm Kurz that Mike Norris made for me on a Tikka M55 action and I can see a space for a full blown ‘98 custom based on an 8x57mm round but with a modern twist.

Regardless, the venerable old 8x57 JS is still capable, as it was all those years ago; good rounds never die, they just keep getting rediscovered!’