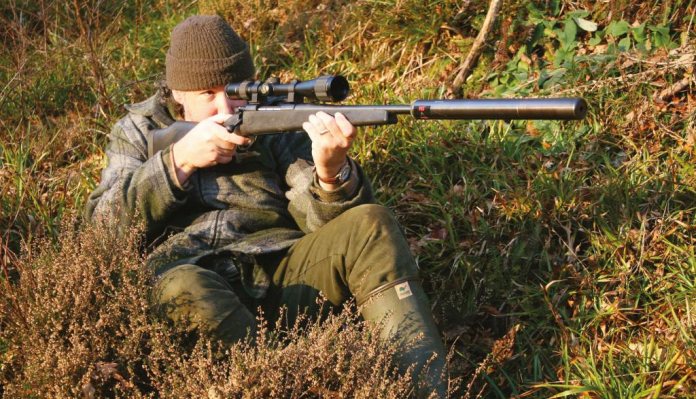 Mention the name Weatherby and the romantic notions of safaris in Africa with a large calibre, quality built, American Magnum rifle may come to the fore. Indeed, Roy Weatherby made his name and the rifles built by him with that quintessentially American big and powerful flavour. Proprietary calibres ranging from the .224 Weatherby Magnum through to the .257, .270 and .30 calibres, all the way up to the large 378 and 460 Weatherby’s have earned Roy’s rifles an enviable reputation for high velocity and hard hitting game getting performance.

I have had several dealings with these hot rods; in particular with the .257 version in the guise of a Weatherby Accumark to several cheaper Weatherby Vanguard models. It’s an interesting cartridge for two reasons. First the .25 cal has never really taken off here in Britain, despite the excellent .25 cals available, such as .25-06, .257 Roberts and .250 Savage or even newer .25 WSM, yet it is a very capable bore size. Secondly, its one of those calibres that transcends the varmint and deer capabilities, that with the correct bullet choice, makes it a very nice cartridge for the one gun owner.

The .257 Weatherby is one of the hottest .257 cals out there. Its origins go back to World War Two in 1944, when Roy Weatherby decided to wildcat the enigmatic old statesman the 300 H&H. He shortened it to 2.549”, necked it down to 0.257” with a pretty straight tapered case for maximum powder capacity. The shoulder, like all of his designs, has a double radius, which is an attempt to increase the correct burn characteristics of the powder in the case but can be a little tricky to reload with. Being a belted design, it headspaces off the belt; so again, correct resizing is essential, otherwise excessive case stretching is a problem.

Case capacity is 84-grains H2O with about 75-grains useable, dependable on bullet weight and seating depth and so for the bore size is a tad overbore. So, with any hyper velocity, smaller bore, you have to take care in the components you load into it.

As with all Weatherby cases, he achieves his high velocities by using a long throat to the rifling, so that pressures are not immediately high, as they would be in a shortthroated chamber. Trouble is, this has a knock on effect of trying to seat a bullet close to the rifling lands for best accuracy. You just can`t! I use a Stoney Point gauge and even with the heavier 100-grain plus bullets, even at maximum length, they are barely touching the lands.

Best compromise is to load the .257 as long as the magazine will allow and live with it! The alternative is to have a custom barrel fitted with a short throat but then you have to tailor make your loads so as not to exceed maximum pressures.

Conversely, re-think the rifling twist rate and use the older 1 in 12 twist rate rifling as on early guns for the light bullets. However, the downside is that it will no longer stabilise the heavier 100-grain plus projectiles. So the standard 1 in 10 inch rifling twist rate is still the best.

Also, most Weatherby’s achieve the maximum velocities with long 26” barrels and so rifles like the Vanguard, with a 24 inch tube, will not achieve max velocities like the Accumark model does. Trouble is that it’s quite a long tube and ups the weight of the rifle and also can impose handling penalties.

In theory, you have a 150-250 fps velocity increase over the standard .25-06 Remington round, but I used to ignore all sensible advice and used my old Weatherby Accumark with 75-grain bullets at 4000 fps! If you have the capability you might as well use it.

Bullets for the .257 were always the bugbear in the early days, as you did not have such a wide choice as you do today. Data from the Weatherby Vanguard’s 24” barrel was used for most of the testing; however I have included information from the Accumark’s 26” barrel in red. I have broken this information down into light and fast bullets – Table 1 and the heavier weights in Table 2.

This is one calibre where you really do need to be careful in the number of rounds you shoot in one session, i.e. don’t get the barrel too hot, otherwise you will seriously cause fire cracking and erosion in the already non-existent throat and leade area of the bore and rifling.

The Federal Premium 115-grain ammunition shoots a Nosler Partition bullet at 3107 fps for 2466 ft/lbs energy an average of five, 3-shot groups of 1.5”. I fitted an MAE T12 sound moderator during the tests, primarily to aid in noise reduction but also to reduce felt recoil. With the MAE T12 fitted, the recoil was no more than a 6.5x55mm Swedish cartridge.

Reload wise, a load of 71-grains of RL22 Powder ignited by a Federal Magnum primer under a Speer 100-grain Soft Point bullet produced a healthy 3478fps and 2686ft/lbs energy and grouped in at just under an inch at 100 yards.

I also worked up a superb fox round, utilising the light 75-grain V-Max bullet from Hornady sent it speeding across the chronograph at over 4000 fps! With 2665ft/lbs of energy! I used to use H380 powder but it’s too hot, so tried a load of RL17 or Hybrid 100V powder instead. This was a super flat fox round, although accelerated throat erosion in the barrel will undoubtedly stop these antics in their tracks, but shows the potential of both round and rifle.

Reduced loads too are very interesting, powders such as Vit Tin Star or IMR Trail Boss are good but I like the SR 4759 powder. Here a 100-grain bullet and 18-grains achieves only 1802 fps for 721 ft/ lbs but in the MAE mod is superbly quiet and very accurate for close range foxing. Trajectory wise, I imputed the data from the reloading bench into Quick Target ballistic program and a good 100-grain bullet, such as the Speer SPBT travelling at 3450 fps if zeroed at 200 yards is -2.4” inches low at 300 yds and only 17.1” low at 500 yards and 15” off on windage with a steady 10mph wind. As can be seen quite some potential over a diverse range of loading recipes and bullet weights.

The .257 Weatherby is one of those calibres that gets overlooked all too easily, as the uninformed view is that it’s just a bit more powerful than a comparable calibre, in this case 25-06 Remington. However, once you have shot it, you tend to stay with it, as it has some serious potential!

This big cartridge is at the top end of the .257 calibre range and although Accumark rifles can be pricey, the Weatherby Vanguards are still good value for money and give good performance.

Ideally suited really for long-range, flat shooting at deer on the hill or open fields and abroad for Chamois and the like. Trouble is, as with all magnums, they are just that and so careful reloading and barrel care is needed, otherwise it can come back to bite you. For most, the .25-06 Remington is more than enough and that’s where my attention turns next.