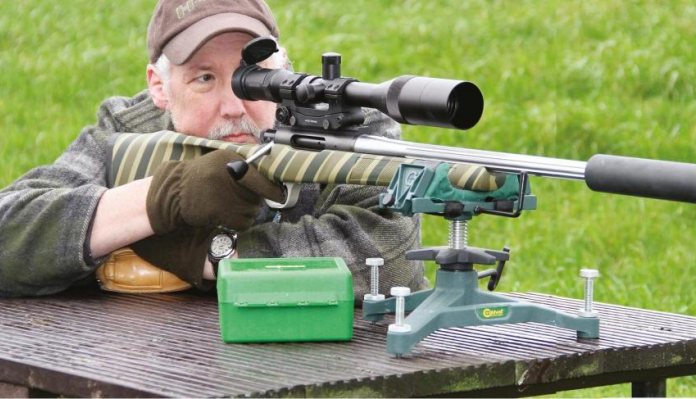 We all know now that the small fat case design has dominated the Bench Rest (BR) and Long Range (LR) world, showing that better ballistics and precision does not have to be gained by packing in more powder. The 22 and 6mm PPC is the prime example here, however the PPC case was always an odd one, based on the 220 Russian, itself as derivative of the military 7.62x39mm round, you needed a bolt head specific to that size.

A .22-250 case has a length of 1.912” whilst the 22 BR is only 1.520”, water capacity and hence powder charge potential is 43 and 36-grains respectively. It had the all-important 0.473” case head, size that so any rifle with a bolt that size could be re-barrelled in 22, 6 or 7mm BR, but feeding from a magazine, as with the PPC round that has always proved a bit problematic. Although with its quite shallow, 30º shoulder angle and when loaded with long heavy 22 calibre bullets, a bit of manipulation gets the round feeding ok. Remington produced their 6 and 7mm BR cases that were easily necked down, but now nearly all the chaps I know use the superb Lapua 6mm BR brass as the parent case.

Being a wildcat, you can go whichever way you like with regards to throating for different bullet weights and lengths as well as rifling twists. All done to accommodate either a light and fast or a slower heavy long range type. Also, as with any custom chambering, it can be beneficial to have a tight chamber neck, so you can neck-turn your cases to a precise size; so, there is a just enough space to allow a safe bullet release on firing, whilst still and maintaining it on a true axis down the bore.

It’s always a good idea to get brand new brass and weight-sort them, before starting the reloading or forming stages. Lapua 6mm BR case is my choice for the 22 version and all have the small primer pocket that make the BR and PPC designs very efficient. Lapua brass have drilled flash holes not punched, so no burrs, but it does not harm to still uniform the primer pockets and flash holes just in case.

The RPA Quadlite, with its switch barrel system using my Ken Farrell barrel vice, makes testing a new wildcat easy. I had an old .223 fast twist 1 in 8” barrel that was cut, re-threaded and crowned at the muzzle and set back with new chamber for an overall length of 22”. The Pacific Tool and Gauge reamer was speced for a 75-grain Hornady A-MAX bullet and a tight neck diameter of 0.252”.

The longer throat allowed better case or powder capacity, or at least the chance to avoid a compressed load. You can go the slower twist rate of the .22-250, to achieve less pressure and higher velocities without stress on the thin bullet jackets. I prefer going heavier, as it doubles as a long-range varmint and small species, deer-legal gun.

Forming cases is easy. Start with 6mm BR brass, lube, then run through the Redding 22 BR full length die. I would chamfer the inside and outside of the neck walls too. I also would not do this routine in one go, half size the neck then rotate the case 90º and then complete the process, which helps to keep everything straight. It’s a small size reduction from .243 to .224”, but still take it slow. I expand the neck or uniform it with a Sinclair expander to iron out any wrinkles and then trim to 1.520” maximum. Next, lube the inside of the necks with Imperial sizing wax and start to neck turn your brass.

With the 0.252” chamber I size now neck turned the brass, so that I had an outside diameter measurement of 0.249” with a loaded round of 1.5 thousandths” clearance per side. I allowed the cutter to go into the neck shoulder point, as when the case is fireformed it reduce the formation of the inside doughnut of brass.

If I started with a new barrel, I would have gone for 28” for long range work, but the BR case is efficient and so at 22” and then a sound moderated fitted it’s still a handy rifle to carry. Fire forming the brass was just part of the sighting in with the new Minox ZP5 scope and Tier One 20 MOA rail and excellent scope mounts. I used Quickload to determine a good starting point for the bullet weight ranges and I used Federal small match primers for all loads.

The 22BR is another one of those rounds that really surprises you and you have to shoot it to believe it, not listen to people who don’t own one. It’s incredibly easy to form brass, load development is simple and its one of those rounds, like the PPC, that refuses to shoot bad groups when fed correctly. Look at the velocities of those mid-range bullets, as they nearly match that of the .22-250 but with 4- grains less powder dependent on bullet weight.

The lightest 30 and 35-grain bullets tested gave good velocities, but poor accuracy and star burst bullet holes on the paper target indicating its coming apart. Still with a 1 in 8” twist, the Hornady 40- grain V-MAXs actually held together and achieved good 0.75-0.95” groups. Velocities of 3810 fps and 1289 ft/lbs with 26.5 of Swiss RS36. 50-grain Noslers and 52-grain Speer Match I tested later showed the barrel liked the extra weight.

Now the real longer range pills, which is where the true potential of the 22 BR lies, as the streamlined, heavier bullets carry a higher BC with a reduced wind drag. The 75-grain Sirocco, another good deer bullet, just refuses to shoot well; it’s finicky at best, so did not surprise me.

Highly accurate, frugal on powder, low noise and recoil and long barrel life what is there not to like about the 22 BR; I am thinking of a 7mm BR Improved?