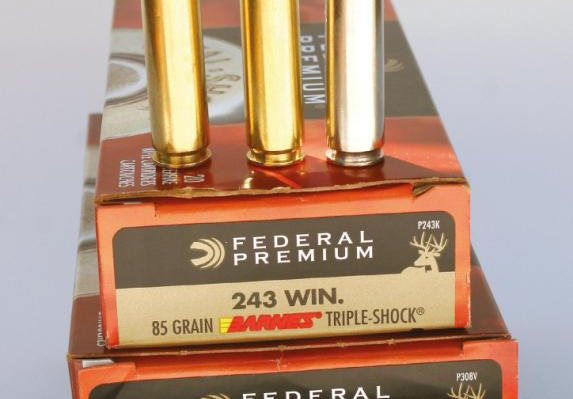 I wanted to explore the accuracy issues and potential of lead-free bullets and their implications to shooters here in Britain. It is important to understand that these rather different projectiles, due to their construction have characteristics that will influence how well your rifle will shoot them, be that factory ammo or reloads. In fact, you stand far greater chance of achieving good accuracy from reloads, but not everyone wants to go down that route.

To clarify; a standard (lead-cored) bullet uses a thin copper jacket with a lead core, which is either bonded in, or retained by an interlock ring or partition. On impact, the soft lead moves back and expands to deform the bullet for maximum destructive effect. Non-lead mainly comprises of a solid (monolithic) copper alloy hollow point or ballistic tip. Some, like the Barnes TSX, have pre-cut ogives (noses) that split on impact for greater terminal effect. Lapua’s Naturalis, expands into a mushroom shape but does not fragment or open up and cut like a lead-cored does.

Gone are the days where 1.5 -2” groups were acceptable, today’s shooters demand sub minute of angle (MOA) or at least, 1” @ 100 yards and often far better and that is the criteria set here. Every rifle is different and some just do not like certain loads for whatever reason, be that lead-cored or lead-free.

I selected bullets in .308 and complimented them with .243/6mm, as 243/308 Win are a pretty stable diet for most stalkers. I could only manage to source some Factory Federal Premium copper factory loads using Barnes Triple shock bullets (TSX) in .243 and .308 and some .270 Winchester E-Tips for comparison, as no .308 calibre were available. I would like to test some Norma Eco strike too in the future, as I rate this brand highly.

Due to the differing densities of lead compared to copper, you will find that non-lead will always be longer. This has implications not only for bullet stability in flight but also the seating depth within the cartridge case and thus pressure levels and powder capacity.

If you compare all the copper .308 bullet lengths to the lead-cored Ballistic Tip you can see they are all longer, the GMX was some 0.111.5” longer. That, in ballistic terms, is huge and can causes problems in stability, if the rifling twist is slower than normal. A 1 in 12” twist is sufficient to stabilise most 150-grain .308s but look at the accuracy from the GMX and E-Tips; not acceptable! But, when shot in a faster 1 in 10” barrel, accuracy improved noticeably! The Barnes TSX was the exception; it performed very well in the 1 in 12” but it was the shortest copper bullet tested.

This was mimicked with the 6mm/.243, with the longer copper bullets performing worst in the 1 in 10” barrel, but better in the 1 in 8” alternative. Alternatively, if you usually shoot 150-grain .308 lead-cored, then drop down to a 130-grain non-lead to ensure stability and better accuracy. I use the 120-grain Barnes TSX in my 7x57mm AK Imp, as it hits like a 160-grain but expands like a 140.

Monolithic copper bullets can cause problems with bore fouling and higher pressures, as they have no ‘give’ in them and they deposit more copper fouling into the rifling. Manufacturers get around this is, as some have grooves (cannerlures) on the bearing surface to reduce both fouling build up and pressure issues. Nosler E-Tips have no cannerlures, but these use a softer copper alloy with a differing surface hardness, which fouls less anyway. Even so, you must watch the pressure if you are reloading, as even with these measures copper bullets also tend to be slightly less in diameter to further stop fouling and pressure issues.

As a consequence of the above issues, this directly relates to the seating depth of your copper bullets reloads to achieve best accuracy. One: as they are longer they will occupy more space within the cartridge case and therefore if loaded to the same seating depth as conventional lead-cored will cause a higher pressure with the same powder weight. Indeed, in the boxes of the Nosler E-Tip bullets it states to start reloads with the minimum charge weight and not exceed the middle loads from their reloading manual.

Two: Most manufacturers of copper bullets also recommend you seat them much farther off the rifling lands than normal. Lead-cored tend to shoot better the closer they are to the rifling i.e. there is only a small jump on firing, thus minimising any bullet wobble that could cause inaccuracies. That’s a general rule, but copper usually have to be seated at 0.050” to 0.100” off the lands, in ballistic terms that’s miles!! Look at the targets to see how the accuracy does improve when the non-leads are seated deeper into the case!

Compare an E-Tip to a Ballistic Tip in 6mm for their measurements in ogive to base. This is where the rifling will touch the curved forward section of the bullet to the bottom of the base. The E-Tip is 0.7245” long, that’s 61% of the total bullet length compared to that of the Ballistic Tip which is 0.6055” which is 56% of its total length. This means that when loaded to the rifling, the same the copper E-Tip will seat further back into the case. Add to this that you must keep them a further 50 to 100 thou off the lands and you can see why pressure and powder capacity is affected.

Factory ammunition is scarce, as seen from what I could muster for the tests, but more is coming on line, like the newer Norma Eco, which I have yet to test. This is a problem if you own anything other than a .243, .308, .30-06 or .270. Even if you reload, the choice is still limited, not only in manufacturers available but also calibres and bullet weights. The reality is now that reloading is your only real option to obtain the best accuracy and performance with non-lead bullets. Although having said that, the Federal TSX Barnes factory loads did shoot very well but all types can over penetrate when compared to a conventional lead-cored bullet. Plus, as terminal expansion is purely controlled by speed, they might not upset enough at longer ranges.

To summarise, I have put the key points into a pros and cons chart. Of course, your rifle may shoot copper bullets extremely well, as some of mine did, but when compared to the good choice of lead cored bullets and coupled to good terminal ballistics on British deer, you must decide what’s best? The results show that although the terminal ballistics can vary when you get a rifle that likes the copper bullets they can shoot accurately; the trouble is lack of choice and therefore it will take longer to get a preferred load for your rifle to shoot correctly. Next time, actual penetration test in ballistic gel.