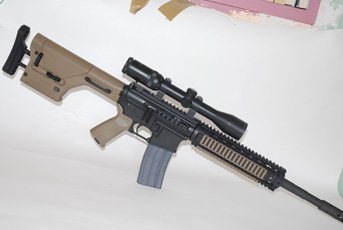 Alexander Arms (AA) are perhaps best known in the UK for their 6.5 Grendel cartridge, which and like the Remington 6.8 SPC are/were contenders to possibly replace the 5.56x45 (223 Rem) as the US service rifle cartridge. As regular readers know I have a CZ527 custom in Grendel and this intermediate design punches well above its weight. Maybe better than 243 Win and with 25% less powder too!

However, their other offspring is a little different, as the .50 Beowulf is everything the Grendel is not, so here’s the message; the Beowulf was designed to generate devastating stopping power at short to moderate ranges in an AR15 platform, so would seem well suited to close cover hunting on species like big deer and wild boar. With bullet weights ranging from 240 - 385-grains it has some potential for larger species too. In some ways you have a modern version of the 45-70 in a self-loading carbine.

It seems it has also become popular in military and law enforcement circles. The external ballistics are well suited to urban environments where the shorter range template allows for more flexible application. We are told the large projectile and energy it delivers can disable both motor vehicles and assailants with body armour. Windscreen glass does not affect the trajectory of the bullet nor does automotive body panels.

Where Does It Fit?

All things Alexander Arms in the UK come through Low Mill Ranges, who sent me a generic, .50 Beowulf CAR15/M4 carbine though obviously manually-operated. The cartridge is based on the old Israeli Military Industries (IMI) 50 AE (Action Express) which was made for their Desert Eagle pistol, though the case is longer at 1.65” compared to the AE’s 1.28”. Distinctive is that it has a rebated rim, that is to say it has a rimless head that is of smaller diameter than the base of the case. The advantage here is that you can fit a wider case into the existing bolt face, so less re-design is required. Here a 7.62x39mm bolt head is used, which is the same as the Grendel’s.
The barrel is 16” and of a medium/heavy, H-Bar-style with a large flash hider/muzzle brake. The forend is a 4-way, free-float design and the furniture is from Magpul with an MOE pistol grip and fully adjustable PRS butt. This last seemed a bit OTT for a stubby carbine firing a dustbin-sized bullet! Operation is by a side-cocking handle on the right, which is the way forward these days. Though the gun retains the standard, T-handle at the rear of the action. So very much a modern, UK-legal AR, but specialised, so what’s it good for?

Figures taken from the web indicate that velocities/energies from a 24” barrel are impressive. Here are three examples 300-grain 1,870 fps/2,330 ft/lb, 334-grain FMJ 1,980 fps/2,908 ft/lb and 400-grain JSP 1,875 fps/3,123 ft/lb. However, a 24” test tube is not the 16” barrel of the rifle supplied; likewise ammo was reloads. These used a 350-grain truncated cone TMJ bullet over 32.9-grains of fine powder (probably a pistol grade), which over the chrono was producing an average of 1500 fps/1748 ft/lbs. Compared to the 24” tested loads these figures are lower, but and as with any straight-pull AR, primary extraction (PE) must be taken into account. I know with a 6.5 Grendel AR I tested the ammo was also down-loaded to give easy operation. My bolt-action Grendel offers the luxury of full power loads due to its operating system. Though looking at the wide, reasonably short and slightly tapered straight-walled case; I would say that PE might not be such a big issue even with hotter loads when compared to a 223 Rem, 6.8SPC or 6.5G.

Down, Test and Adjust

Feed is from an AR-type magazine that holds just 10-rounds, though is the same size as a 30-shot 223 clip. First impressions are of big recoil, as that 350-grain pill even at 1500 fps does thump the shoulder a bit; much like the old 45-70. The muzzle brake does not seem to do a lot and for more efficiency I’d fit something like a Holland high gas version to compensate. Likewise the recoil effect tends to slack off screws, so they need to be tight and mounts of good quality. After some initial inaccuracy, I switched to all-steel Warne rings, which proved up to the task. But in fairness the Beowulf was made for a self-loading gas gun where some of the kick will be taken up by the operating system.

At 100-yards supported the Beowulf was shooting 1-2”, not too bad, but I think experimentation with reloading could probably fine tune that a bit. Primary extraction was not an issue and the rifle cycled easily and reliably. But what can you do with a big thumper like this? For me it would make a great brush gun where you need maximum, close range stopping power. Though the guys at Low Mill also said it could make a good long range gallery rifle, which seems a bit OTT to me.

Without doubt the .50 Beowulf does have something to offer, but my build spec would include a longer barrel of around 18-20” and a more efficient muzzle brake too. Iron sights would be mandatory along with a more normal butt. It would certainly make an attractive alternative to something like a 45-70 lever-action carbine, with the added advantage of a box magazine. Alexander Arms offer factory ammo, but doubtless it will prove expensive. Plus I wonder what a full patch 385-grain load might feel like in the shoulder?

One thing I like about cartridges like the Beowulf and for that matter the 6.5 Grendel and 6.8 SPC is that they all fit into the AR15 platform, which opens up a lot of possibilities in terms of rifle and calibre choice. I’d like to thank the guys at Low Mill Ranges for the opportunity to try the .50 Beowulf as it was certainly interesting.

www.lowmillranges.co.uk
For: Lots of power potential
Against: Kicks a bit
Verdict: far from mainstream but with possibilities