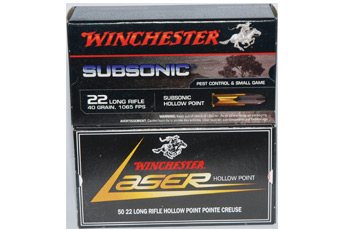 Winchester seemed to have upped their game, or at least their packaging a little with a couple of their rimfire offerings. The first will be very familiar their good old 40-grain sub-sonic load, which for many years has been my sub of choice. The second is another that has been around for some time, though you may be less aware - the hi-velocity Laser.

Most noticeable on the sub-sonic is the change in packaging, which over the years has gone from a white to a blue box. Now it’s black with a bit more information on it, so remember as if you are scanning the shelves it might not register. The load consists of a dry-lubed, 40-grain hollow point bullet with a more ? at-nosed truncated ogive style. The nose shows a big (bucket-like) hole certainly compared to some other US and European offerings. Which is one of the reasons I have always liked it for its terminal efficiency! The case is plain brass.

Certainly with semi-auto rimfires many shooters prefer something a bit faster, which is where the Winchester Laser comes in! Visually this round has changed considerably, early examples used a nickled case, which has been discontinued in favour of plain brass, doubtless for economy. The bullet remains the same being a copper-washed hollow point, which unlike the sub-sonic shows a smaller hole and more rounded ogive shape.

Visually the hollow point is not well formed and shows a slightly flattened shape, with a subsequent lack of consistency on the nose. Some of the speed increase is down to the bullet weight, which is 37.5-grains, with Winchester quoting 1370 fps/157 ft/lbs. The chrono told a slightly different story at 1345 fps/145 ft/lbs, which is good and still way up on a sub-sonic.

Accuracy was not so good but still a respectable inch at 50-yards and being well over the speed of sound these HVs can be noisy even with a moderator. They are however a good choice for semis as the extra oomph cycles the action better.