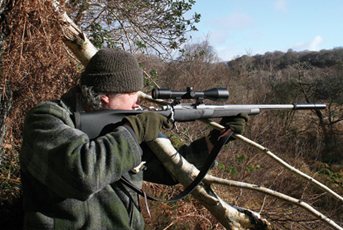 Some cartridges work, some don`t, that’s life. It`s unusual though to get relaibilty, efficiency, accuracy and power all in one package. However I like messing with cases, bending brass, annealing into the long hours in pursuit of a wonder calibre, but I will be the first to admit most factory cases will sort out nearly all your shooting needs.

The 6.5x47 Lapua has become a cracking round both for long range target/ varmint and deer stalking. I like .30 calibres so I just had to neck that case up, which makes a change as I have previously necked it down to .20 and .22 for my .20 and .22 Satan cartridges. In a short action rifle this 30-47L Wildcat would certainly meet my needs for deer stalking in woodland but would still have enough oomph to tackle a red stag out on the hill. So I set about choosing the components for a custom rifle, always fun, but often costly! As it happens it would turn out to be a rifle I use all the time for stalking duties and is one of the simplest wildcat rounds to form.

Being a custom project I wanted to start from scratch but you could re-barrel any .308 bolt face rifle cheaply. It needed to be a repeating custom action and I fancied stainless steel too. I settled on the Predator action from Stiller which is a Remington 700 clone but at benchrest quality specifications. There is an extended bolt handle, pinned competition recoil lug and fluted bolt with Sako-type extractor. To this I added a 20”, stainless steel, match grade Walther barrel, fluted for visual impact and weight saving benefits in 1-10” twist rifling.

Trigger choice would be easy as Jewell single stage units are superb but I actually plumped for a sturdy little single stage Timney as the large trigger shoe, safety catch and fine single stage operation just felt right on what would essentially be a hunting arm. A detachable mag was sourced on the same basis so an H S Precision stainless floor plate and 3-shot clip finished in black paint was an obvious choice.

A good fibre glass stock will shrug off bad weather and in turn reduce risks of inaccuracies caused by wood swelling or soft bedding issues. My favourite Lazzeroni thumbhole style from McMillan inletted for a Remington 700 action, so the Predator would fit just fine, barring a few alterations to the fit the HS Precision floor plate and magazine. No synthetic bedding at this stage.

I use several cartridges based on the 6mm Swiss Match and newer 6.5x47 Lapua necked down to .20 and .22 calibres, so this new round would simply be a 6.5x47 Lapua necked up to .30” with a capacity between that of a 30 BR (Bench Rest) and a standard .308 Winchester. In this way mid range weight bullets, 125-150 grains can be launched at deer legal velocities/ energies from a relatively short barrel with the minimum of powder burnt.

Case reforming is a doddle, new 6.5x47 L case necks are expanded in three stages using Sinclair expander mandrels, well lubricated with Imperial sizing wax, my favourite. First a .270 (.277) sizing mandrel followed by a .284 (7mm) and finally a .30 mandrel. A small ‘doughnut’ of excess brass at the union between neck and body is formed from this expansion so you could neck turn to reduce the thickness and eliminate the doughnut, I left it.

A chamber reamer with a 0.336” neck diameter allows 2.5 thou of clearance on either side of the loaded 125 grain bullet neck diameter that measured 0.331 inch, thus negating the need for neck turning. In this way you all you then have to do is de-burr the case neck mouth in and out and load up a round so the bullet is touching the lands, 2.6545” overall length with a 125 grain Nosler Ballistic tip bullet and fireform giving the new case an exact fit to the rifles chamber. It’s as simple as that! You can have custom dies made but I used a set of 308x1.5” neck dies with the correct neck bushing (0.330”) and then a cut down .308 seater die to seat bullets. If you need to full length resize and ‘bump’ shoulders then a custom die is needed.

With the shorter 20” barrel and lighter bullets I went faster burn on the powders to reload such as Vit N120, Vit N130, Reloder 10 X or H 4198 were deemed suitable. These days I like to stick to a couple of powders and work around them otherwise you can have too many variables and you end up chasing your own backside trying to find a good load.

I settled on a starting load of 38-grains Reloder 10X with the 150-grain bullets after running the data through Quickload ballistics program. The 150 grain Sierra GameKings produced a healthy 2711 fps/2449 ft/lbs of energy with the Nosler 150 grain Ballistic Tips not far behind at 2683 fps/2398 ft/lbs and Nosler Accubonds producing 2737fps/2496 ft/lbs.

That’s good performance from a 20” tube and only 38-grains of powder. Upping the charger weight to 38.5-grains gained only 31 fps and 39-grains only yielded another 47 fps velocity and that would a top load for pressure. Best accuracy came from the old Game Kings shooting in less than 0.45” at 100 yards for three shots and at 200 yards only 1”; impressive I think you will agree!

Next were the Sierra 125-grain Pro Hunter bullets similar to their GameKing but with a flat base. These produced less velocity than the heavier 130s at 2780 fps/2146 ft/lbs but shot superb 0.40” groups. Lower velocities than expected also with the 110 grain V-MAX (fox load) at 2891 fps/2042 ft/ lbs energy were attributed to a low maximum powder weight for this bullet weight and the powder being a little too slow also.

I am genuinely very impressed with the performance and effectiveness of this round that utilises minimal powder charge to accelerate a range of differing weight .30” calibre bullets for good velocities yet have very mild recoil and is easily sound moderated. It makes use of a short barrel so adding a sound moderator such as a JET Z Compact or MAE 38mm muzzle can does not increase the overall length too much, ideal in the woodlands yet is still accurate to drop a stag at over 200 yards or crow at 400 yards.

It`s such a simple wildcat to make even if the process scares you and the accuracy of this Predator rifle is quite staggering but more importantly reproducible in all weather conditions. Reality check is that a .243 or .308 may suit you just fine but that’s not what this article is about, think out of the box a little and you could own something a little different by simply rebarreling an old .308, short-action rifle.