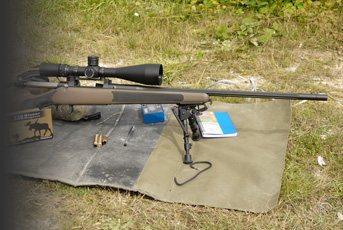 It’s been four years now since I first got my switch barrel, Mauser M03 Extreme and I have few complaints. The rifle is a little different as I have been chopping and changing barrels/calibres. I started off with a 30-06 and a short (20”) 223 Rem. The 06 has now gone to be replaced by a 6.5x55 Swedish and the 223 substituted for a longer 23.5” version as I was not getting the speeds I wanted out of the original.

The stock is now the new version, with adjustable-height comb and their Mag Safe system in the African PH sand colour. The main reason for getting rid of the 30-06 was that I also bought an 8.5x63mm REB (essentially a 338-06 with a more Ackley-like shoulder design) as a boar and big game calibre so making the 06 a bit redundant. The bore size in English is .338”, which is a highly versatile calibre and available in a number of options – 338-06, 338 RCM (Ruger Compact Magnum), 338 Win Mag and of course 338 Lapua Magnum. The newest addition to this hard-hitting family is 338 Blaser Magnum.

Blaser has developed a number of calibres all made by Norma and using various bullet manufacturers with the 338 being one of them. I rate it highly and my 8.5x63 Solid barrel for my MO3 can shoot weights from 185-grain (Barnes TSX) up to 250-grain Nosler Partition. In terms of power it’s in the upper/middle class and offers just that bit more weight, strength and mass than a comparable .30” calibre. But still does good duty on smaller deer with no real problems either.

I’d seen the 338 Blaser at IWA and asked Mauser about borrowing a barrel and getting some ammo, which duly came across courtesy of UK importers Open Season Ltd. The tube was their 26” Match fluted, which is a medium/heavy build. Along with this to facilitate the swap was a new bolt head and magazine. If you are not aware the M03 is a switch barrel rifle and a calibre change takes under two minutes.

The ammunition was loaded with a Barnes 210-grain TTSX, similar to what I use but with a ballistic tip instead of a hollow point. This should improve down range performance yet give the same devastating results on animals as the original. I matched the rifle up with a Night Force 3.5-15x56 scope with their new ZeroStop elevation turret.

This first taste of the 338 Blaser was just to get some figures and see how it shoots. Truth is calibres like this are a bit wasted on the more run of the mill deer species, as they are a bit over kill. For me it’s more an African, longer range and larger species hunting round.

Norma quotes the following specification for the 210-grain TTSX load: Velocity - 900 MPS (2952 fps), Energy - 5514 Joules (4066 ft/lbs). On paper these are some pretty impressive figures and using the mighty 338 Lapua Magnum as a yard stick firing a 250-grain bullet we get 2903 fps/4678 ft/lbs. I have kept the bullet light to try and get near the 210-grainers used by the Blaser. These figures are not that comparative but the nearest I could get to give a working idea of the differentials.

On the range and like my 8.5 the 338 feels like a big 30-06 in the shoulder and it’s well-mannered enough to shoot prone with no unpleasant recoil affects. The fluted Match barrel is not as heavy as say a pure varmint type and heats up quite quickly. Hardly surprising given the amount of powder the Blaser is using! For zeroing I tended to treat it like a sporter and shoot two rounds at a time, If I shot a 3-round group then the last one would usually step out a bit, which to me indicates rapid heat build-up, which causes it to deviate from its cold position.

For me the 338 Blaser is a pure hunting cartridge and one that offers a practical, accurate, effective and longer range big hitter…