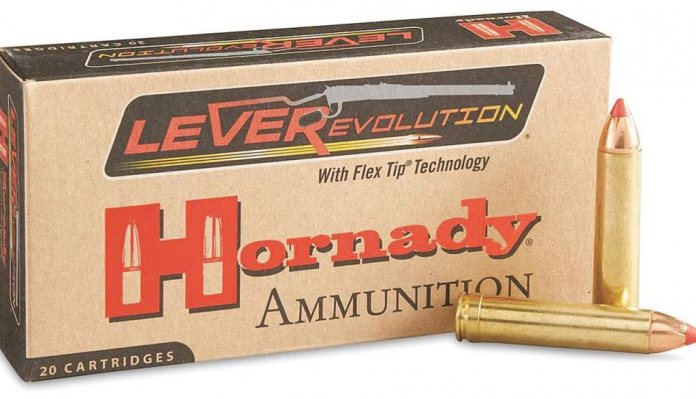 In the world of belted cartridges, this month’s subject is a relative youngster, launched at SHOT 2000 by its creators, Marlin and Hornady. Their idea was to deliver a powerful, same calibre, lever-action friendly +P upgrade for the venerable .45-70. This would further extend the game hunting performance, to cover pretty much all the North American trophy and meat species. As a cartridge designed for use with black powder, the capacious .45-70 case offered a dramatic increase in performance when used with modern smokeless propellants. But there’s the problem. If a commercial ammo maker exploited the full potential, they would soon be on the end of a chain of claims for blown up vintage Trapdoor rifles.

As a +P .45-70 was therefore a non-starter, Marlin’s ‘Plan B’ was to develop a ‘new’ cartridge that could offer smokeless performance gains from their range of modern lever-actions. The .450 Marlin was the result. Although claimed as an original design, it was undoubtedly based upon the 1962 Frank Barnes wildcat, the .458 x 2 inch American, a chopped .458 Win Mag. In order to obviate the risk of mis-chambering misadventures, Hornady broadened the belt, although the potential for ‘misfits’ still exists.

Performance from the launch 350-grain Hornady flat point was 2100 fps from a 24” Marlin. By .45-70 loading standards, it was a pretty modest gain. It was based upon a pretty light pill, masking the fact that heavier bullets needed to be seated deeper, thereby reducing working case volume. Their next offering was even lighter; a 325-grain FTX achieving 2225 fps, a better performance gain on the .45-70. The Hornady FlexTip design permitting the safe use of a pointed bullet in a tube magazine, thereby giving superior ballistics.

As one would expect, Marlin released a lever-action chambering for their new baby. However, interest from other manufacturers, were few and far between. Just Ruger with their ubiquitous No1, Winchesters M94 TE and the Browning BLR. Indeed, Marlin themselves have played hopscotch with the chambering!

As a reloading proposition, it is covered by almost all post 2005 manuals, even squeaking into the 2003 Second Edition Lee tome. Whilst REACH has weeded out a lot of the listed powders, there are still quite a few to choose from. Tools are listed by all the major makers and the multiple bullet options are limited only by what can safely be employed in a tube mag. Take care to control cartridge overall length (COL) and the crimp needs to withstand robust recoil. Mindful of the large percentage changes to case capacity that will come from varying bullet weights, take care to ensure that the operating pressure stays below the SAAMI MAP of 43500 psi. If the COL for a particular pill does not correspond with the cannelure, then you can trim the case length to suit, after all, it headspaces on the belt. BUT, make sure you identify which cases you have reworked or suffer the consequences!

So, what the hell are you going to do with it? Factory ammo costs a fortune, reloading is expensive and it’s total overkill for anything in the UK. This lively cartridge is hardly a tack driver and the guns are never going to be collectable. Spend your dosh on a really nice original Trapdoor and stick to .45-70; it will be far more rewarding and might even appreciate in value.