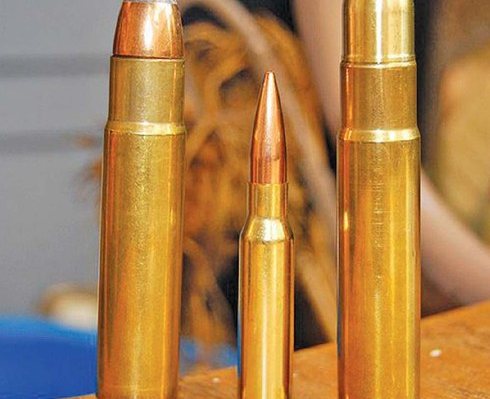 Imagine that many of you have witnessed the YouTube footage of a gentleman in Middle Eastern attire attempting to fire a monster sporting rifle, with (for him) serious and painful consequences. Even better is the footage of a couple of total morons trying to fire it from a seated position. The rifle was an A-Square Hannibal chambered for their .577 A-Square Tyrannosaur (aka T-Rex) cartridge. The most powerful sporting arm/ ammo combo in the World. Indeed, the devastating recoil has to be managed by the presence of three mercury recoil reducers in the stock. However, even with them and a chunky 13lb weight the recoil energy is around 170 ft/lbs… That’s more than one and a half times the energy of being shot in the shoulder with a .22 Hollow Point. Real fun, not.

The genesis of A-Square as a cartridge and rifle builder is almost as vague as the identity of its founder and alphabetic name donor, Arthur Alphin. Earliest references put the company start date at about 1976 with the .577 T-Rex surfacing in 1993 as a wholly new design of rimless, bottlenecked cartridge propelling a 750-grain .585” monolithic solid pill. Performance was atop the seriously ‘Big Five’ league, with a claimed speed of 2,460 fps, equating to a muzzle energy of 10,180 ft/lbs. When launched it was claimed that the cartridge was developed as a ‘get out of jail’ follow-up round for use by professional escorts when their paying clients has only succeeded in annoying their target with a wayward shot.

Whilst the Sharps Rifle Company had held a controlling interest in A-Square since 2010, they closed their doors in late 2011 and that seemed to be the ends of matters. However, a year later the remaining title and assets were transferred to the Sharps Rifle Company but nothing came of that. In Feb 2013 the phoenix arose when Sharps Rifle Group including A-Square were acquired by the Broadsword Group and production restarted.

Handloading this monster is not about saving money, or tuning the performance to your rifle or shooting application. After all, there is really only one commercially available rifle and in a good year you may fire a dozen rounds. You’ll probably handload this cartridge for the hell of it!

Materials and data are available, albeit from a variety of novel sources. Brass is currently only offered under the A-Square banner and bullets from A-Square, Barnes (.583) and Cutting Edge Bullets as well as traditionally constructed 650, 750 and 900-grain pills from Woodleigh. Loading data requires either an investment in the A-Square tome or reference to a couple of credible web sites. Just three propellants are generally suggested as being safe for use in this monster, Hodgdon H4831, IMR 4350 and Alliant RL19. Factory duplication with the Barnes solid requires a very compressed (long drop tube) charge of 180-grains of Reloader19 and a hefty roll crimp. Federal 215 primers seem to be the preferred starter. Dies have been listed by both A-Square and RCBS although current availability is unclear. The three die set from RCBS was priced at $470 from an American supplier and over £610 from a UK source.

Rifles? Ah yes, you can pick up a second-hand Hannibal with less than ten rounds on the clock for under $4500. That’s about a new Landrover less in price than most of the other custom ‘Big Five’ offerings. Just remember, it does not come with free medical care.