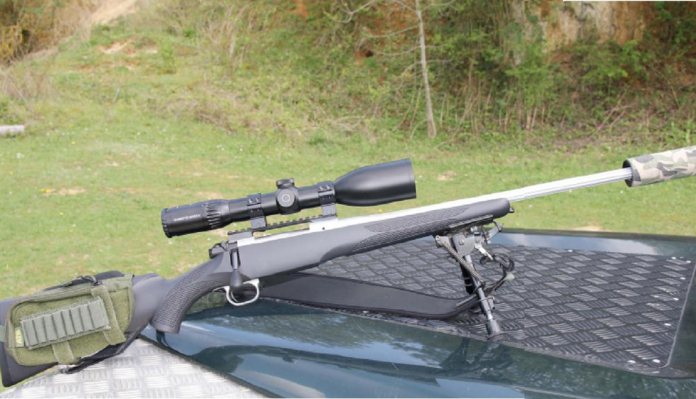 If you did not read part 1 in the July 2018 issue, I shall recap. In the face of the reasonably recent expanding popularity of the short action 6.5mm calibres; 260 Rem, 6.5x47 Lapua and 6.5 Creedmoor, I started to wonder if the original 6.5x55mm Swedish cartridge still had a place? It fires the same bullets but suffers from the facts that the original M96 action is not as strong as more modern builds; necessitating lower powered ammo and reloading data (unless noted), just in case you were to load it in an original rifle, which does not consider that in modern firearms it is at least the ballistic equal of the newer wave of 6.5s.

You don’t have to convince me, as I have a Mauser M03 Extreme in 6.5 Swedish and it can be loaded up easily to top end data. However, I picked the Mauser M12 Impact, 22” version as my test bed, as it represents the trend on modern rifles for mid-length barrels. The Impact is an outgrowth of the standard M12, with a medium weight, 22” fluted tube and solid, Extreme synthetic stock. Twist rate is 1-8”, so near perfect for most 6.5mm projectiles and it shows a slight and gradual taper, with a 15mm thread at the muzzle with protector.

It comes as standard with a Barton Gunworks 20MOA rail and feed is from a detachable 5-round magazine. The long bolt handle shows a teardrop knob style and gives a low, 60° lift angle. The shroudmounted safety uses a 3-position lever; forward FIRE, middle SAFE with bolt operation and rear SAFE with locked action. It’s easily operable by the firing hand thumb, without having to break your grip. Priced at £1220, it represents a quality and fully accessorised hunting rifle in the mid-range price bracket in a good choice of short and long action calibres. Accessories went to a Harris BRS bipod, Barton Gunworks reflex moderator and a Schmidt & Bender Polar 4-16x56 (34mm tubed scope) in Sportsmatch 34mm rings.

First, to the accepted bullet weights; with 140-grains being the industry standard, followed by the heavier 155/156-grain loads. For this, I chose three factory brands from Norma 140-grain Nosler Partition, RWS 140-grain Twin Core Cone Point and Geco’s 156-grain round nose soft tip. Plus, two reloads; a Lapua 155-grain MEGA round nose soft point over 47-grains of Vihtavuori N560 and a Hornady 143-grain ELD X Long Range hunting ballistic tip over 45.7-grains Ramshot Hunter. Any one of these is more than enough for Moose, which is a testament to the calibre’s ability and versatility and the fact it’s the entry level calibre in Sweden for these big beasts, which can go as heavy as 700kg in the larger males. Accuracy testing was at 100m, supported off the bench with the moderator fitted.

From what I have discovered, the 140-grain load seems to be the most popular, with many feeling that the demonstrably slower 155-grainers drop off with velocity and energy too quickly. Taking two factory loads, let’s see; I’ve also included the energy threshold (1700 ft/lbs for medium/large species) and 300 yard drop figures, which is probably the sensible/ethical, maximum hunting range for most people:

However, the reloads tell a different story and demonstrate the superiority of the right bullet and the fact 6.5x55 can be reloaded advantageously in a strong modern rifle. Although the 155 still suffers from earlier drop off and threshold figures, it still beats the factory equivalent! However, I would be the first to admit that Hornady’s ELD X offers a superior build and ballistic coefficient (BC), as it’s intended for longer range hunting use.

In terms of sheer accuracy from a factory hunting load, I was seriously impressed with the RWS Twin Core Cone Point. I’d like to get hold of some for reloading tests, as there’s no doubt you could push them on to greater things; although the ELD X still seems top choice to me. (see heavyweight data table)

Now we come to the lighter bullets and pure reloading. My theory, and some previous experience, indicates that we can use the 6.5x55 with medium and light bullets for faster and flatter trajectories. Here, we are potentially approaching or exceeding 243 Winchester and possibly entering the realms of 25-06 Rem and maybe even 270 Win. All loads were taken from modern published data and powders were chosen randomly from what I had on my shelves.

With their monolithic copper bullets, pressures can be an issue and data can be a bit on the mild side and probably in a 22” tube not that quick. Then again, it has been set up to accommodate all 6.5x55 rifles; so, is probably not a true reflection of what they are capable off. I’ve pushed their .270” and 8.5mm bullets hard in some of my other rifles, with no ill affects and I’m sure that the M12 could take it easily. For any form of reloading, get your self a copy of QuickLoad, as that allows you to build your cartridge in the virtual world, using a wide array of powder types and projectiles. And the programme will indicate all the possible good and bad aspects of the results. Quite a mix of information, but to illustrate what difference powder choice makes, using the 100-grain Sierra with 42.4-grains of Vit N140 gave an average of 3001 fps/2016 ft/lbs, with ridiculous 0.35” groups. Hornady’s 95-grain V-MAX running on the same load clocked 3010 fps/1922 ft/lbs and 0.6” groups. As can be seen in both cases, group size significantly reduced and velocity and energy increased. So, what’s best in this area? I’ve taken the four loads; two medium and two light using the threshold and 300 yard data to see. (see Lightweight data table)

All the above are large deer legal, but in truth the Sierra Varminters are just that and very frangible, experimentation shows they will blow up on the surface and cause wounds. These are better left in my opinion for pure varminting. Although tests with the 95-grain V-MAX showed they worked well on foxes and small deer species. No massive revelations on the old 6.5 Swede, but I hope that it has showed it is a performer to be reckoned with, in the face of the modern competition!