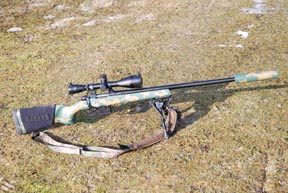 If you take any interest in firearms and ammunition development you might have noticed that there has been a move afoot to find a possible successor for the 5.56x45mm NATO cartridge, that’s 223 Remington to you and me. Truth is the 223 has come a long way from the original, US Military M193 ball load firing a 55-grain FMJ at 3200 fps and for that matter the sporting derivatives too.

Faster rifling twists, heavier and more ballistically efficient bullets have taken what was originally a varmint round into a number of diverse areas. The M193 has gone to be replaced with the SS109 firing a 62-grain projectile. Sports-wise we can go as light as 36/40-grains and as heavy as 90 for rabbit/hare/crow, fox, small deer, Practical/Service shooting and even long range.

Bigger Is Better, Is It?

But the military seems to think that something bigger would be better, technically correct as a heavier bullet should in theory carry more energy and also inflict more incapacitating wounds or first round kills. To this end we now have two contenders – the Remington 6.8mm SPC (special purpose cartridge) and the 6.5mm Grendel from Alexander Arms. So what has this got to do with us? Simple; any military development in small arms ammunition, if successful, eventually filters down to the civilian market. The 223 Remington and 308 Winchester (7.62x51mm NATO) being good examples. So what might the 6.8 and 6.5 have to offer us?

I have been lucky enough to shoot both the 6.8 SPC and the 6.5 Grendel, initially in straight-pull AR15s and latter on bolt-actions and I have to say the Grendel gets my vote, as I have never come across such an effective and versatile calibre. However, it looks like on the military front if the 223 is going to go then the 6.8 SPC will replace it. This is probably more to do with the clout the big manufacturers have at government level as opposed to results on the ground.
Research indicates the 6.5 Grendel came about from collaboration between Arne Brennan and Bill Alexander (Alexander Arms). In 1998 Brennan investigated the 22 PPC and 6mm PPC in search of a more capable competition and hunting round. By 2000 he had developed a 6.5 PPC wildcat in a modified AR15. In 2001 he and Bill Alexander were introduced and as they say the rest is history. So as can be seen the Grendel comes from the time-proven, Bench Rest, PPC family, which are said to be some of the most accurate calibres designed.
There’s little doubting the short cartridge overall length (COL) of the 223 Rem allows for a compact rifle and one of the criteria for both the 6.8 and 6.5 was to fit into the existing M16 platform. This by the simple expedient of making a dedicated receiver, or re-barrelling and bolting the existing one and adding a new magazine that would fit the original lower meant the M16 rifle could soldier on into the mid 2000s.

This was my first experience of these calibres - the 6.8 SPC in an SGC custom Speedmaster from Bob Clark and the 6.5 Grendel in an AR from top PR and Service Rifle shooter Dave Green. The idea being that at longer ranges the heavier bullets would buck the wind and work better than 223 Rem, which as I discovered is not that clear cut. However, a calibre made to get the best out of an AR15 gas gun (self loader) cannot perform to its maximum ability in a manually operated, straight-pull design such as we are only allowed in the UK, as we shall see.

I must first admit that I am mainly coming at the Grendel from the hunter’s perspective, though I will also be looking at its range shooting potential too. But truth is apart from the AR15-equipped PR and Service shooter, if you want a target gun then there are a lot better 6.5mm calibres out there already. However, its 0 to 300 yard ability with the right loading and launch platform is little short of amazing!

By this time I had borrowed a bolt-action, Remington 700 Light Tactical Rifle (LTR) in 6.8 SPC and it had some potential. The problem was that ammunition was non-expanding so not deer legal and I had to load for it. The 6.8mm is in fact .270” which does not offer a huge choice of bullets. In the SPC the only thing I could get to shoot straight and make 1700 ft/lbs was a Hornady 110-grain V-MAX and that just scraped in at 1720 ft/lbs. Accuracy was OK though not stunning, but the short/light cartridge was easy on recoil and modest on powder capacity.

Both Dave and Bob had supplied ammunition for their respective gun tests, which was loaded to give improved reliability in a straight-pull. In other words; chamber pressure is kept purposely low to try and ease primary extraction effort. In both cases I found that I got the occasional hard extraction, which is to be expected, but velocities were low. As I recall both rifles had sub-20” barrels, which again is not ideal for maximum performance either!

Later investigation with US arsenal load information and then Hodgdon data showed that US tests guns had 18 ¾” barrels and pressures were held to 50,000 psi as per Alexander Arms instructions. This was done to make any gas gun reliable and not working at the top end of the curve, which is sensible. This however made for some mediocre results over the chrono and Sierra Infinity V programme…

However, I ran a few hypothetical loads over Infinity that convinced me the 6.5 Grendel had some serious potential. Much later when I had my rifle up and running and in discussions with Ron Reiber (Product Manager) Hodgdon Powder Co he had this to say: “We held pressures to 50,000 psi per Bill Alexander. However, in a bolt action, there is no problem pushing the bullets to the velocities you obtained by raising charges to the 60,000 psi range. This is a very efficient cartridge and yields higher velocities than one might expect!”

I will get on to cartridge development and reloading in Part II, but what really makes the Grendel attractive is the fact that cases are available from Lapua and Prvi Partizan (PPU) and the choice and range of 6.5mm bullets is excellent. Plus dies are off the shelf from Lee Precision and both VihtaVuori and Hodgdon have data and powder. However, there is a downside as to date no one makes a 6.5 Grendel bolt-action, so you will have to go the custom route! But one thing you can’t fail to appreciate; is that Arne Brennan really got it right from the outset. This is what first strikes you about the round as its size and modest charge weights appear out of all proportion to what it can produce in both power output and accuracy.

The Grendel uses the same 220 Russian (5.56x39mm) case as does the 22 and 6mm PPC, meaning any 7.62x39mm-type bolt gun would do as a donor action for my Project Grendel. But this hardware is few and far between, however a solution arose in the form of Riflcraft’s Compact Precision Rifle (CPR). Owner Andrew Evans-Hendrick had been making 22 and 6mm PPC rifles on the CZ 527 chassis and I had shot both types and was amazed at the accuracy. My good friend John Rippin had also gone this route and had his 527 re-barrelled in a modified version of the original 7.62x39mm chambering, which he designed called the 30 Rippin.

It occurred to me that the cartridge would not only fit the bolt face but also the box magazine COL. I approached Andrew about Project Grendel and he said he already had a chamber reamer and could order a suitable barrel blank. All I needed was a CZ 527 action in 7.62x39mm and a stock. In essence he would be building a 6.5 Grendel CPR.

I approached Derek Edgar (Edgar Brothers Ltd) and he talked to CZ and in a few months I was in possession of a CZ 527 action in 7.62x39mm and the H-S Varmint stock. My thanks to him and CZ for their help and support.

I decided on a 22” barrel as I was more concerned with performance than handling. Andrew suggested a 1-8.5” twist rate, which worked out very well, given 1-8 or 1-9 is recommended. The medium/heavy tube was threaded for a moddy (1/2 x 28” UNEF) and then bedded into the H-S stock with a generous free-float.

The only slight problem was the feed. The magazine is designed for the slightly more tapered 7.62x39mm case and I found the Grendel presented a bit too low. The solution was achieved with modification to the rear of the feeds lips to raise the base of the round up and also by taking a few thou off the inside of the trigger guard straps to raise the mag well up a little.

Given the rifle would be used solely for hunting I used my Leupold Custom Shop 3-9x50 VX-II with Mil-Dot reticule and M1 turrets in Kozap mounts. Sports Match UK make a dove tail and ring set for the 527, which is good but a little high. However it’s a good solution for a 56mm objective scope. The reason I picked tactical turrets was the fact I ended up developing two loads that suited my deer and fox shooting needs, so I could just click in the correction as required.

The end result was as the CPR though two inches longer, which I was willing to tolerate as the 22” tube proved a wise choice in terms of velocity/energy figures. The final addition was an Ase Utra Compact, muzzle-mounted can, which proved how easy the Grendel is to moderate. This is going to be replaced by their new North Star NS3 reflex model in ½ x 28” UNEF.

The end result is a compact rifle with a decent barrel length that handles very well and as I was to discover punches well above is weight. Just to whet your appetite two loads I developed using VihtaVuori N130 and N530 powders offer the following figures:

None shoots outside ½” at 100 yards, all of which is most impressive and powder charges do not exceed 30-grains. In terms of ability the 6.5 Grendel really does offer 223-like characteristics with near 243 Win performance without any problems. To sum it up; the law on small deer, which allows 22 centrefires on muntjac and CWD is in fact a joke, as you can’t shoot roe and larger. But one of these in your hand means you are ready for anything and I would include fallow and reds given you keep the ranges sensible. Or switch to the 85-grainer and it makes a lethal fox buster that is also good for deer…

The CZ/Grendel combo has already been blooded and took two nice roe does recently using the Partition load. Full penetration, a perfect pass through and near instant kill with little peripheral damage were the results. As we shall see I have pushed the loads up to 140-grains with varying success, but you can go as heavy as 130-grain and still get 1700 ft/lbs +.

OK there are many better calibres out there in terms of range and power, but the Grendel impressed the hell out of me as something that gets the job done very effectively at realistic hunting ranges. Next month load development, abilities, the rifle in the field and calibre comparisons.