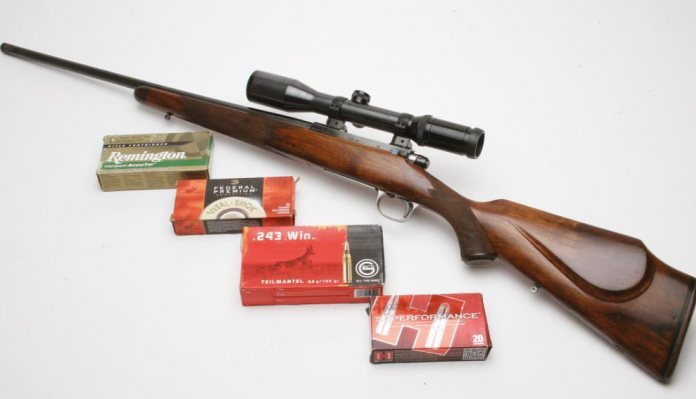 The minimum legal calibre being .240” (6mm) for all large deer species and the small ones too, although in their case it’s not mandatory, is what makes the .243 Winchester cartridge the most popular in the UK. But with a small 6mm diameter bullet, with weights ranging from 55 grains to 115-grains, typically, the .243 Win also doubles as a vermin/fox round too. Don’t forget in Scotland it’s a minimum, 100-grain entry level for large species deer.

So, I picked four .243 Win factory loads to see what’s on offer, which includes two old favourites and two new-comers. Bullet weights range from 75 to 105-grains, so typically deer-legal and designed for all species. But some projectiles are better suited than others, as fast, lighter bullets designed for smaller species may be too explosive on larger breeds; conversely these heavier bullets may not perform well on a smaller deer’s frame.

The lighter weight loads were the Remington Premier Accu Tip and Hornady Superformance SST. The former has always proved a good ‘do anything’ load over the years. Its 75-grain Accu-Tip bullet is accurate and always delivers a high shock value to the quarry you shoot at. The former uses a 75- grain SST (Super Shock Tip) again an accurate and hard hitting design, which importers Edgar Brothers asked for, particularly for small species deer in Britain. It also scores on being quick, as it uses special powders to up velocity without pressure increase.

On the heavy side, are the GECO and Federal factory loads. GECO is German and offers a premium cartridge at a good price. The bullet used is a 105-grain Teilmantel or Soft Point, designed for a more controlled expansion as compared to the 75 grain offerings. Federal’s Vital Shok load is also designed for a more controlled expansion, utilising the excellent Sierra 85-grain Game King, so a good in-between weight and one of my all-time favourites.

I tested each load for performance down range in terms of velocity and energy over a chronograph and then at 100 yards for accuracy using a Tikka M55 Custom .243 (TABLE 1). I then set up four identical blocks of ballistic media at 50 yards to ascertain the down-range performance of each load side by side for an exact comparison. I then measured the bullet path for expansion and total length and did it expand immediately and measure the all important wound channel by filling with water and measuring the volume. Recovered bullets, where available were re-weighed to see their residual weight after firing.

This just proves that you must test something to see how it really performs. First, accuracy, a subjective thing, which could be different in another rifle, but the results for the Tikka are what they are. It liked the Hornady Superformance best with 0.85” 3-shot groups at 100 yards, but all cartridges shot. The Hornady also had the highest velocity at 3386 fps for its 75-grain bullet, compared to Remington’s 75 at 3240 fps; so, justifying its Superformance credentials.

Largest wound channel went to the Remington Accutip bullet, which had a whopping 1085 mls internal volume. Not surprising, as if you look at the bullet’s performance, you can see why, as it turned to shrapnel. It had little initial penetration first, before it expanded and caused also the largest entry wound at 2.25” diameter. It only penetrated 7.5” total, the lowest so all that 1771 ft/lbs energy would be dispersed within the body cavity. It turned to shrapnel and so could not be weighed.

The Hornady SST by comparison despite having a higher velocity was a little more controlled. It had the second largest wound channel volume at 845 mls so good and expanded as soon as it touched the ballistic media. The entry wound diameter was second largest at 2.15” and total penetration was a little more than the Remington at 8.5”. But true to the SST design it penetrated more and still retained some of its weight, in this test, 33-grains, so just less than half.

The Geco, as expected penetrated the most at 12”, an inch of that was in the catching media behind the first ballistic media! The entry diameter was smaller than the 75-grain bullets at 1.45” and exit at 0.45”, the only bullet to exit on tests. It only started to expand after 0.25” penetration and then caused a very healthy 810 mls wound channel and retained a recovered weight of 52-grains; nearly half.

Last but no means least, are the Federal Vital Shok loads. At 85-grains bullet weight it’s a nice compromise but not on performance. It had the smallest entry diameter at 0.95” and no exit for a total penetration of 10.5”, so a controlled expansion. It also penetrated initially the largest before expansion at 0.35” than the others, but oddly only retained 32-grains of its initial weight, as the lead core disintegrated! The wound channel volume was also the smallest at 645 mls, so a bullet that sheds its energy slower than the others.

These are the results, now you must decide which type is most suited for you. So, do you want a fast bullet that expands rapidly or slower that penetrates more? Fast and quick expansion is great for vermin/foxes but will cause a lot of venison damage on small deer and may fail to penetrate enough on larger species. Conversely, slow, heavier bullets are good for larger deer, as they penetrate more and release the energy slower and cause less venison damage.

The thing is, although you might think a small fast bullet for small deer species might be logical, there’s potential for a lot more carcass damage and destroyed venison. I prefer a more controlled expansion, so a compromise weight of 85-90 grains, with suitable bullet type may be best.

I shot two Roe for the test, one with the 75-grain AccuTips, the other with the Geco 105-grain. Both were harvested at 70-80 yards range and were approximately the same weight and shot placement. The AccuTip`s higher hydrostatic shock on the meat means more wasted venison, compared to the Geco`s minimal amount. However, the AccuTip dropped the Roe on the spot and the other moved only 5 yards after being hit with the GECO load. Subjective yes, but those were the results.

The only thing I would say is that the 105-grain bullet can be a bit heavy for the standard rifling twist in some rifles, in the Tikka that was not the case, but in other guns I have seen group sizes expand noticeably. I will be working through more factory ammo in differing calibres, to see how they perform too.