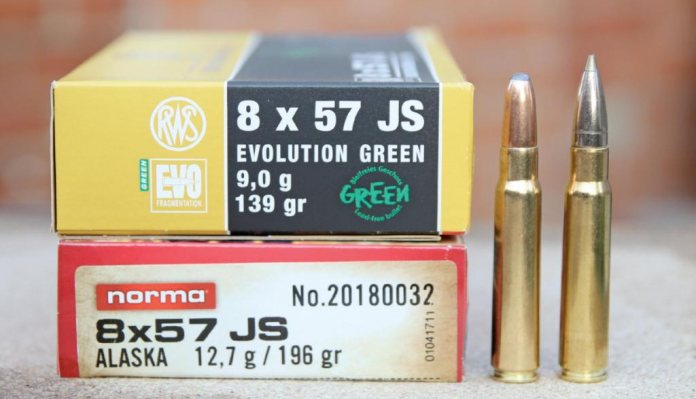 There are some old calibres that just won’t quit and are as viable today as they were at the time of their inception, maybe more given the good choice of modern bullets. And we go to Germany for their old service round, the 8x57mm JS, known also as the 8mm Mauser.

I like metric calibres and asked RUAG AmmoTec UK Ltd. if they had anything in 8x57JS. They came back with two loadings, from Norma and RWS, both hunting loads. I’ve used ammo from both brands before, so know that they offer a quality product.

Norma offers the traditional weight of 196-grains in their round-nosed, soft pointed Alaska bullet from their Professional Hunter line. It’s good for all deer species, wild boar and certainly most African plains game. Not fast but carrying a lot of weight and energy makes for good penetration, expansion and knock down ability. The RWS surprised me, as it was running a light, 139-grain Evolution Green (non-lead) which is a Speed Tip twin tin cored bullet, designed with a fragmenting head, leaving the harder shank to penetrate and exit.

My test rifle was a Blaser R8 Professional Success with the standard, 22” barrel with a Swarovski 2.5-15x56 Z6i with ballistic turret to ascertain accuracy at 100m and as a general deer scope. For wild boar, I’d go with something like an illuminated 1-6x24. The 8x57 is a bit lumpy with the heavier bullets, though not that bad, the lighter weights make it like a 308 Win. I’ve split the data into what the load says it’s doing (quoted) to what I gathered over the chrono (average), the ES extreme spread only applies to the chrono figures.

Given the shorter barrel of the R8, not bad real time figures and some impressive energy too. As might be expected, the Norma load loses energy quicker and drops to 1700 ft/ lbs at 185-yards, which is better than some, but with a more curved trajectory. The RWS doesn’t hit 1700 until 225-yards, even though its BC is slightly lower at 0.327, as opposed to 0.347 of the Alaska.

I’ve shot deer with the Alaska and it’s a real slam dunker and does not do a lot of meat damage. I’ve yet to kill anything with the RWS load and wonder how much peripheral damage that fragmenting bullet does? Here’s what they say about that: “Outstanding knock down power, Preservation of the game’s meat – different.” We shall see!