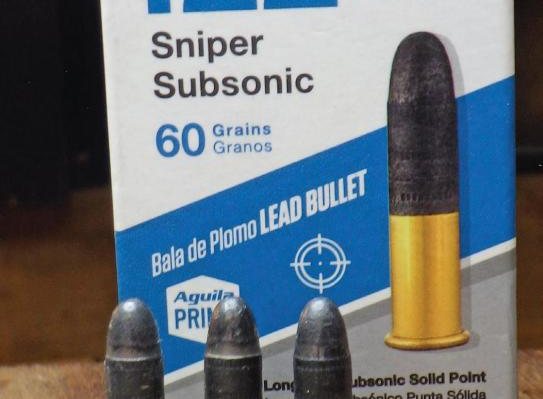 In 2019 Westlander were appointed as sole distributors for Aguila in the UK and they now carry a comprehensive selection of their .22 rimfire ammunition, including a few out-of-the-ordinary products like the one on test.

The Aguila .22 Sniper Subsonic ammunition carries a 60-grain bullet, 50% heavier than the standard projectile for this calibre. To accommodate this extra-large bullet Aguila have cleverly shortened the case so that the cartridge overall length remains close to standard, and the ammunition fits all .22 rimfire magazines and guns without any issues.

Power where it counts

Despite the shortened case, muzzle velocity is 950fps which is ideal for subsonic ammo in this calibre. This velocity, combined with the heavier bullet, produces muzzle energy (ME) of 120ft/ lb. which is significantly higher than their ‘standard’ subsonic ammo and at 100-yards the bullet is carrying 96ft/lbs, the same figure as their regular subs have at the muzzle!

Aguila recommend this ammo for longer barrels, with a faster twist, but it actually performed very well in a variety of guns including bolt-actions and semi-autos. With the 60-grain bullet you can feel a difference in the recoil but nothing significant. Accuracy is very good and more than acceptable for shooting vermin at suitable distances.

What you do get is a significantly increased ‘knock down’ effect, with all that extra weight and energy working where it counts, at the target. Retained energy at 100-yards matches standard, and even some high velocity, 40-grain ammo but of course being subsonic it can be fired through a moderator making it ideal for vermin. On a moderated rifle the 60-grain bullets are dispatched with very little noise and disturbance to the wildlife was minimal. On vermin the effect was noticeable, with the heavy bullet moving them a significant distance from the point at which they were hit.

Aguilas 60-grain Sniper Subsonic ammo is an ideal round for hunting small vermin and pests. The heavier bullet has been accommodated in the shortened case without compromising performance and the higher muzzle energy increases its effectiveness on vermin considerably. You must, of course, not attempt to test the improved terminal effectiveness at excessive distances, or on larger targets, unless you are 100% sure of a clean kill. That said, the improved performance over standard subsonic ammo should increase your effectiveness when it comes to pest control, once you get used to it. Accuracy is very good and this ammo is definitely worth a try. It is not cheap, but it is very effective and well worth the extra cost. The full range of Aguila ammunition can be viewed on Westlander’s website where they also list UK stockists.