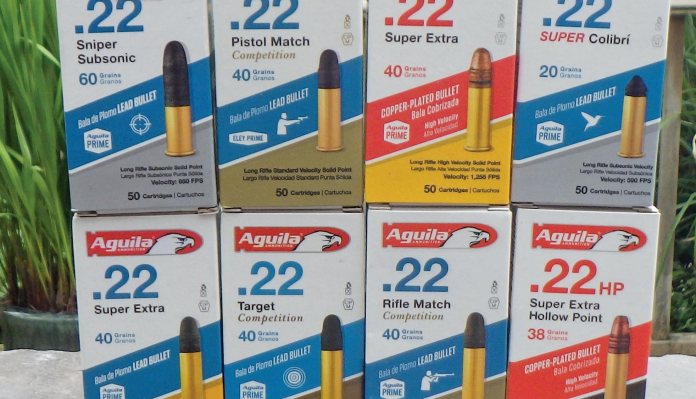 Westlander is now the sole distributor for Aguila in the UK and the range of .22 rimfire ammunition they carry includes something for every application. All of it is well packaged to prevent damage and the ammunition is very clean, with no excess lubricant to gum up your gun. Whichever type of their ammunition you choose it all looks great quality and very consistent.

The 60-grain bullet is 50% heavier than the standard projectile for this calibre and that means significantly increased knockdown power. Muzzle velocity (MV) is 950 fps and muzzle energy is an impressive 120 ft/lb. At 100 yards the bullet is still carrying 96 ft/lb, which is equivalent to the muzzle energy of some regular subsonic ammunition. When used with a sound moderator it is extremely quiet making it ideal for pest control. The heavier projectile has been accommodated by shortening the case, without compromising performance, and the higher energy increases its effectiveness on vermin considerably. Accuracy is very good, ensuring good shot placement in addition to the enhanced knockdown power this ammunition provides. (RRP £17/100)

The name says it all, this premium ammunition with a 40-grain bullet is designed specifically for use in pistols and it is ‘manufactured to Olympic standards’. The powder burn rate has been optimised to suit this type of firearm and produces a MV of 1080 fps from a 4.75” barrel. Although we are no longer able to shoot pistols with this barrel length, this ammunition cycled and performed very well in our long-barrelled pistols and grouping was noticeably better than standard .22 ammo. It also functioned in a variety of rifles and accuracy was very good. (£13/100)

This high-velocity ammunition includes a 40-grain copper-plated bullet and produces a MV of 1255 fps. Although Aguila describes it as a ‘plinking’round it is actually a highquality product and accuracy is not bad. Firing rapidly with a semi-auto rifle this stuff feeds smoothly and stays on target. The bullets hit hard and tin cans can be destroyed with just a few rounds, great fun. (£6/100)

The Super Colibri uses a 20-grain pointed bullet to produce a MV of just 590 fps and only 16 ft/lbs of energy. It is so quiet that there is no need for a suppressor when used outdoors and the report is actually less than you get from a .22 airgun. In use, this particular ammunition struggled to shoot a group at 25 yards, and in a well lit indoor range, it was actually possible to watch the bullet travel through the air in an arc! The only application for this round would perhaps be for shooting small vermin at extremely close ranges, in a barn for example, and in that sort of situation, an airgun would be a better choice. It would not cycle in a semi-auto rifle so use would be limited to boltaction or single-shot guns. Of all of the types of ammo tested this is the only one that really failed to impress. (£12/100)

Aguilas most affordable .22 rimfire ammunition, the Super Extra uses a 40-grain lead bullet travelling at 1130 fps. Described as being ideal for ‘affordable plinking’ this is not a ‘cheap’ product and the quality and presentation is far better than any bargain basement .22 rimfire ammunition on the market. For general fun shooting, this is a great round. (£5.80/100)

Shooting through both bolt-action and semi-auto’s this ammo is very accurate, shooting consistent groups at 25m. The 40-grain premium bullet travels at a MV of 1080 fps and you can see that each and every round is very clean and well finished. With one of the keys to success in a competition being consistency it is impressive to see just how uniform in appearance these rounds are. (£13/100)

This is standard velocity ammunition, firing a 40-grain bullet at 1080 fps. The round has been specifically designed to perform best in 24” match barrels but in practice, it shot well in all of the guns used in testing. In a bolt-action rifle, you certainly do get match level accuracy and recoil is very light in a heavy gun. Again these are very clean and uniform rounds, which is just what you need in competition. (£13/100)

With a copper-plated, 38-grain, hollow-point bullet, this high-velocity round is definitely designed to hit hard and knock vermin over. The MV of 1280 fps ensures full expansion on soft targets but it also allowed the bullets to punch holes through 2mm steel plates during test firing. It was surprising that a relatively soft hollow-point bullet penetrated the steel but the power of the little .22 rimfire, with the right ammunition, is often underestimated. This is a very effective bullet for small vermin where noise is not an issue. (£8/100)

All of the Aguila ammunition tested performed very well, with perhaps the 20-grain Colibri failing to demonstrate an effective application. Each type was very consistent in appearance and the high-quality packaging ensures it is free of damage. The 60-grain subsonic is great for vermin, with that extra knockdown powder ensuring it works effectively on the target. Where noise is not an issue the Super Extra Hollow Point is also a great choice for vermin control with lots of power and expansion where it is needed. With such a large range of high quality .22 rimfire ammunition, the Aguila brand will hopefully start appearing on the shelves of more retailers. It is well worth giving a try, as it is quality ammo at very reasonable prices.