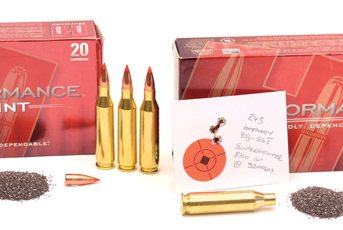 I have recently been shooting with Hornady’s Superformance ammunition in .243. Vermin and fox control is well catered for with a 58-grain V-MAX and a 95-grain SST option provided for deer. Superformance is a proprietary blended powder system that features modified burn rates to allow peak pressures to dwell, rather than spike giving greater muzzle velocities in existing cartridges without excessive pressure problems. 100-200fps is promised but how would it fare in terms of accuracy in a variety of barrels?

ACCURACY HITS THE TARGET, NOT SPEED

Dismantled rounds showed charge weights of 48.6 and 49.3grains of a fine, ball-type powder in the varmint and deer loads respectively. In terms of mass, these are heavy charges but being a ball-type, density is high giving the ability to physically fit a stout charge of slower burning propellant into the accessible volume.

My own 26” barrelled .243 showed only a 15pfs velocity gain, so the round is not length-critical. Velocity alone will never mark a particular cartridge out as exceptional but as my 5 year old Hornady reloading manual suggested 3800fps being possible, I did question the point of claiming this to be a `Superformance` round.

Accuracy in my custom rifle was very good with the 58’s showing dependable sub-1” accuracy at 100 yards. I have never found success with the SST, but here they were giving, 3-shot groups between 0.4/0.5”. The SST shows a cannulure where the V-MAX does not but both feature a light crimp to the weight consistent brass, so perfect for reloading.

Shooting out to 450 yards on a steel fox showed no issues at all. The V-MAX has a deserved reputation as a fantastic fox stopper and I think the 95gr SST load is going to stay my trusted round for quite some time on deer. Our climate does not show the vast atmospheric fluctuations seen in the USA but one can assume their factory testing has ironed out any temperature sensitivity problems with the powder.

Extruded powder kernels have long shown less sensitivity than high performance ball loadings but long term testing will show up any bad manners. A relatively hot day shooting out to 600 yards showed no extraction problems, pierced or cratered primers and my drop corrections still agreed with the velocities measured over the chronograph at 5°.