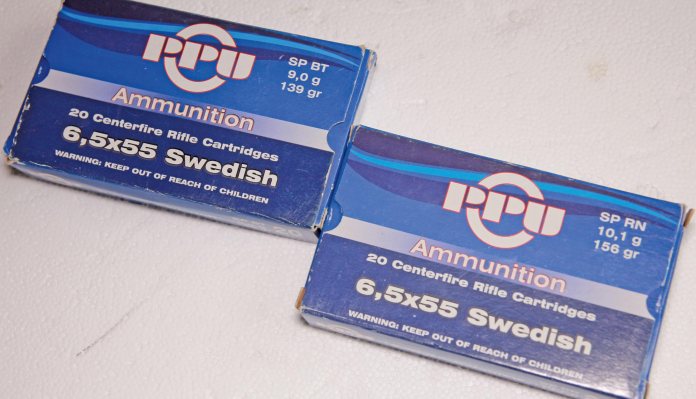 Some calibres survive the test of time and others don’t! Truth is the ones that do mainly seem to stem from military roots. For me four standout – 45-70 Government, 8x57mm Mauser, 30-06 Springfield and 6.5x55mm (6.5 Swedish). For us the Swede is unusual as it stands in a country that in the main uses American calibres as by far the most popular metric ever!

It’s not overly powerful with pressures purposely kept low to suit its original rifle - the M96 Swedish Mauser - which does not have the action strength of the later M98. Meaning today factory ammo does not realise its full potential that could offer more in modern and stronger actions! It’s the bullet that really makes it, as the 6.5mm projectile is long and offers a good cross sectional area and density and therefore excellent penetration properties for the hunter. On the target line the long shape with good ballistic coefficients (BCs) makes it a tack driver too.

I’m looking at two hunting loadings for this old timer from Prvi Partizan (PPU) - the 139 and 156-grain soft tips, which look near identical. They both show a large, exposed lead tip with the 156 being a tiny bit longer. The major difference is the 139 offers a boat tail base, which should make it cut the air more efficiently, whereas the 156 is a fl at base. On taking either apart it’s plain to see the slim 6.5 calibre projectile is very long in comparison to its diameter and I often liken the build to a pencil that just keeps pushing through the target. I shoot a number of 6.5 calibre rifles – Grendel, Creedmoor and the old Swede and have always had excellent pass throughs on all the deer I have shot. To further illustrate this and despite its apparent lack of speed the 6.5x55 is the entry level Moose cartridge in Sweden and it has taken some really big animals!

Accuracy? Well as always the Swede does not disappoint! The 139 has a BC of 0.490 (very respectable) and was giving 0.7” while the 156 (BC 0.348) gave 1” off the bench at 100m. As can be imagined the ballistic curve is somewhat pronounced but that to a degree can be adjusted on your zero point. Ammo is well presented in the new look box with plastic and not card dividers. Brass is Boxer-primed and of good quality for reloading. PPU also offers a 123-grain SP loading too, unusual but at a quoted 2705 fps/2000 ft/lbs flattens the curve a bit and should do well on most deer species.