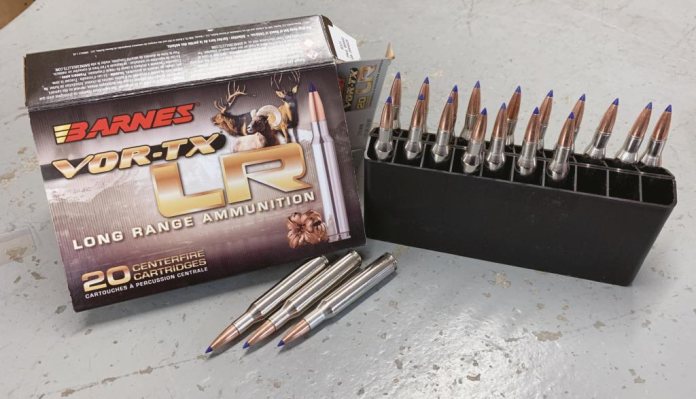 As a standard calibre, I reckon the 270 Winchester is one of the most misunderstood cartridges around. Its reputation, as what I might term a meat mangler, is to a larger degree justified, but only if you use the wrong sort of bullet. For example, the most accepted weight is 130-grains, with the possibility of touching 3000 fps and around 2600 ft/lbs of energy, you need to select the right projectile.

I run a Blaser R8 in 270 and use Winchester Ballistic Silver Tip 130s, this is a premium, lead-cored bullet with a ballistic tip that offers decent, controlled expansion. It rolls over from Roe to Red deer with equal authority, perfect pass throughs and minimum peripheral meat damage and shoots nice and flat. However, swap that pill out for a non-bonded soft point with a slimmer jacket and it’s like hand grenade going off inside the animal.

Although I load for the R8 too, I’m always keen to try other factory offerings and was interested when I was invited by Raytrade UK to test some of their ammo. As well as Remington, they also handle Barnes, who are perhaps more famous for their range of non-lead bullets, what particularly caught my eye was their 129-grain, VOR-TX LR in 270 Win.

My pig gun for many years has been a Mauser M03 in 8.5x63, a 338-06 clone. I load for it using Barnes’s 185-grain TSX (triple shock X Bullets) and it’s a real slam dunk cartridge. They use solid copper (monolithic) hollow points with the ogive, pre-cut to open up into four petals; there’s near zero material loss and, as you can imagine, the effects are devastating!

Barnes then took the concept a stage further with their TTSX (tipped TSX) boat tail bullet with an added polymer tip that boosts the ballistic coefficient (BC) and a reengineered nose cavity to provide even faster expansion and improve long-range ballistics. Taking their 130-grain pill in .277” as an example; the TSX offers a BC of 0.374, whereas the TTSX ups this figure to 0.392 (both BCs at G1).

In 270 Win guise, the VOR-TX LR is built as an extreme-distance hunting load using premium components. Witnessed by the signature chromed case and some very nice and informative packaging, making it some serious eye candy that literally jumps off the shelf at you. The 129-grain LRX bullet appears to be an improved TTSX and shows an even higher G1 BC of 0.463. Barnes says this: “Unmatched flight characteristics combined with a specially engineered nose cavity that peels back into four cutting petals delivers massive expansion and identical on-game devastation from up close to well past 700 yards.” That’s a damn long way!

The packaging is highly informative, showing trajectory, speed and energy out to 700 yards and at 5000 and 0 feet altitudes. Plus, a detailed explanation of the bullet and images of ballistic gelatine being hit with the LRX pill.

Testing was done with my blaser r8 professional Success, which has a 22.5” barrel, it’s a top-quality tube and does not lose a lot of speed over something like a 24”. Barnes, however, don’t say what length they used to gather their data, but I’m guessing a minimum of 24 probably 26”. Visual inspection shows the bullet is heavily factory crimped and a cartridge overall length (COL) 3,278”.

In the real world, I have no doubts about the killing ability of Barnes bullets, as I have proved it to myself many times. However, I also know that rifles can be overly fussy with any monolithic copper solid, regardless of make. Accuracy varies, when compared to the normal lead-cored types; that’s just the way it is. To its credit, the VOR-TX LR performed well enough, as we shall see and, in a different rifle, could well do better.

Although an expected loss of velocity/ energy due to the shorter tube, the figures ably illustrate what a powerhouse the 270 Win is, for example when does the bullet fall below 1700 ft/lbs? In the R8, that’s not until 310 yards, not bad. Using the factory data, that increases to 340 yards and I’d be happy to shoot to 300 yards+ if the need arose with the VOR-TX LR. Forget the UK for a moment, as it would make a great choice for African plains game and European Moose and boar, as these Barnes bullets punch well above their weight in every way!