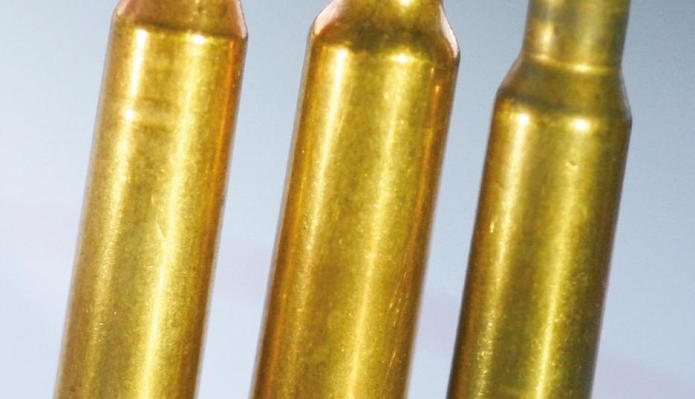 Last month, we looked at one of the calibres to emerge from a manufacturer better known for other products. This month we turn that on its head with a commercial cartridge from a wildcatter, who went on to found a rifle manufacturing dynasty. Roy Weatherby was a wildcatter, hunter, hand loader and entrepreneur from Kansas. Perhaps better known for his family of .300 H&H-based magnums, he went on to develop cartridges based on his own case designs. Our subject this month, the .224 Weatherby Magnum; squint a little and you’ll see a scaled down .300 H&H.

Typically, the emphasis was on grunt. Hotter, harder and flatter than anyone else’s was his mantra, often cutting the barrels of his rifles with a small amount of freebore to help absorb the high start pressures. The .224 WM is a belted design and to my knowledge, is the smallest commercially manufactured cartridge using this headspace configuration.

This belted, bottleneck creation was offered with a 55-grain SP pill, delivering a claimed 3650 fps; hotter than the .223 Remington but not dissimilar to the performance of one of my favourites, the venerable .22-250 Remington. It was, as the original name implied, aimed at the varmint/ small game market. Many of the ammo boxes showing a rather benign fox artwork alongside the legend ‘Ultra-Velocity Ammunition’. However, cost was the killer of the rifle and the limiting factor in the adoption of the cartridge. Whilst Big Five hunters are often happy to pay big bucks for top name safari rifles and ammo to suit, plinkers and pest controllers generally look for cost effectiveness for the tools of their trade. A top brand ‘one-make’ rifle and ammo combination hardly fitted the bill!

As a reloading proposition, the costs were also unattractive. Brass for my .22-250 is listed by Midway at less than 40 cents per case, whilst the best price for .224 WM is $1.35 and up to $2.10 for Norma-made, Weatherby-branded brass with CNC machined primer pockets. As a 22 cal, the choice of pills is almost limitless, although those in the range of 45 to 55-grains seem to perform best! Indeed, a 55-grain BT is pretty much at the practical performance limit of the stock 1:14 Varmintmaster barrel. Large rifle primers are the required starter, whilst the choice of fuel spans a wide selection of powders stocked in the UK. IMR 4064 gets widespread approval, whilst Hornady quotes a max load of H335 pushing their 50-grain V-Max close to 4000 fps. Tools are listed by Hornady, Redding and Forster (plus Simplex for Aussies). Data is not in all the manuals, so look before you spend.

On the bench, one accurising trick is to extend the published COL to minimise the free-bore leap. The fact that the case headspaces on the belt endows it with improved dimensional stability. Fireform and forget may be an overstatement but case life is potentially good despite the high working pressures. As for applications, well, it has demonstrated remarkable benchrest accuracy in custom rifles but has some awesome modern calibres to compete against. As for domestic varmints, the running costs are just too high for all but the dedicated Weatherby fan!