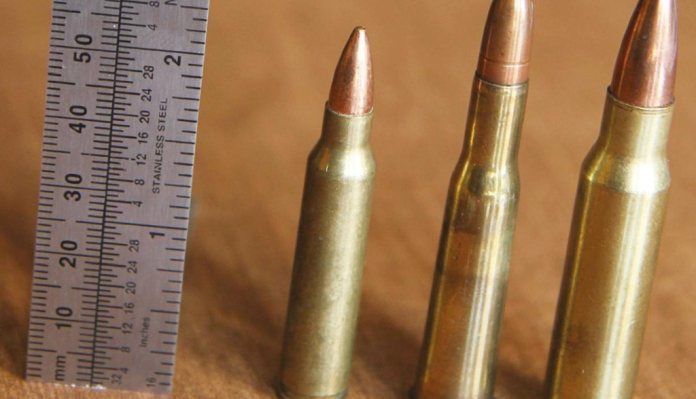 The accepted American convention for black powder cartridges was to designate the calibre and then the charge weight in grains of black, such as .32-40, .38-55, .44-40 and .45-70. So why name the 25-32 in the same format, as it actually started life as a smokeless design? Was it the intention of Winchester to continue the convention but with grains of the new propellant? Or was the 35 a ‘black equivalent’ figure for those without access to the new wonder powder?

The original rimmed, shallow shouldered bottleneck design featured a large rifle primer and a ‘25 cal’ (.257.8”) diameter, 117-grain soft point bullet delivering a claimed 2270 fps. That amounts to a reasonable 1339 ft/ lbs muzzle energy, (comparable to a .223 Remington). It was aimed at those wanting to take close-range, medium game as well as a range of pest species, with a comfortably, low recoil and economic design. At the time, the .25-35 was the perfect fit. Adopted by other lever-action rifle makers, such as Marlin and Savage, it also appeared as a chambering in a number of single shot rifles, enjoying a working life of around 40 years. Indeed, Winchester briefly revived the chambering in their Model 94 in the 1960s and again in 2005. They continue to produce the cartridge and Model 94 chambering to this day.

Currently, the only other commercial maker is Hornady, offering a 110-grain Flex Tip load from their LEVERevolution range. Other notable makers have included Remington, Sellier & Belliot, Prvi Partizan, Canadian Industries ‘Dominion’ and Ten-X Ammunition. Although obsolete from a technical standpoint, this little gem refuses to die.

The metric equivalent is known as the 6.5 x 52mmR (not to be confused with the unrelated 6.5 x 52mm Carcano and 6.5 x 52mm American). It was a popular chambering in combination guns of the time. Whilst it has a separate CIP entry, it is considered identical by the authors of the current Hornady 10th Edition Reloading Manual.

Reloading is pretty straightforward, although I would suggest sourcing your once-fired brass via the Hornady ammo route, rather than from Winchester. As for tools, Hornady, RCBS, Redding and Lee all catalogue the calibre although Midway quote the Redding kit as Special Order. Consumables are definitely not an issue, but data is not included in several current manuals, so check. Reloading offers no particular challenges, but you must remember that it headspaces on the rim and pointed bullets must be avoided if you’re using a tube magazine rifle. For field use, the 25-35’s performance limits it to Chinese Water Deer and Muntjac. For foxing, you will need to consider the practical limits of range when using bullets with a poor B.C. As a target round, it has always had a reputation for remarkable accuracy.