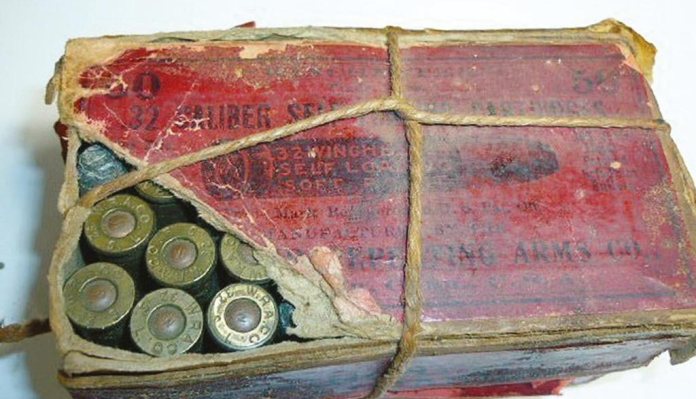 The .32 Winchester SL (self-loading) was launched in 1906, together with a chambering in the Winchester Model 1905 Self Loading Rifle; it was a semirimmed, straight walled design running on smokeless powder, it housed a .321” calibre, (Whelen quotes 0.319”) 165-grain jacketed soft point bullet. Claimed performance was a modest 1392 fps from a 22” barrel.

Accurate but not potent

Colonel Townsend Whelen in his 1918 work The American Rifle is quite complimentary about this “Short, low powered cartridge.” “This is a very accurate cartridge up to 300 yards, and perhaps further.” he observed. Well, it may be accurate up to 300, but not for hunting purposes, as the residual energy would be little over 300 ft/lbs and the drop from a 100 yard zero would exceed five feet! Whelen suggested that foxes and coyote at 150 yards would be the limit of its hunting abilities. I’ll go with that!

Performance differed little from the much earlier (1884) Winchester black powder creation, the .32-40 WCF (Winchester Centre Fire) originally Ballard, but in a considerably more compact assembly. Witness the benefits of even the earliest smokeless powders! Indeed, it was the rapid development of these new and dramatically cleaner (when compared to blackpowder) propellants during the early years of the 20th Century, that contributed to Winchester pulling the plug on the gun in 1923 and the ammo in the 1930s. It was simply overtaken by better cartridges.

Save the factory ammo!

If you happen to own a Winchester Model 1905 in .32 SL under Section 7 then blowing some lead down the barrel is possible. Please avoid the temptation to use original ammo from either WRA Co (Winchester Repeating Arms Company) or Remington Kleanbore, as it is much too rare to waste. Indeed, if GunBroker is to be believed, then you can pick up a clunker rifle for less than the cost of a good original box of ammo! A pristine example of the 31,467 production run auctioned for over $2300 in 2016.)

Custom dies can be had, but not from Huntington, as they’ve stopped making them. Best deal would be a set from the Custom Die Department at Hornady for about $210 plus shipping. Henry Krank offers drawn Bertram brass at a sensible price. Alternatively, you can source it from the Robertson Cartridge Company in Amarillo, Texas. The calibre is a bit of a nuisance as your choice of .321” pills is seriously limited, with the 170-grain Hornady SP being one of the best candidates. Load data is mostly apocryphal stuff on the interweb. Whelen quotes a load using obsolete Hercules Sharpshooter and Cartridges of the World (COW) quotes loads using 2400 and 4227 of unknown vintage. To be safe, slug the barrel, do the numbers, start low and work up.

In the 13th Edition of COW, it offers this tribute to the .32 SL. (sic) ‘Some might consider this cartridge the best candidate for the title’, “World’s Most Useless Centrefire Rifle Cartridge.” But then, a Phoenix from the ashes!! In 1940, the U.S. Ordnance Department requested the submission of ‘light carbine’ designs that could replace the .45 cal pistol in close quarter) combat. The winning entry was the Winchester .30 Carbine (M1). Their highly successful design being based upon the obsolete .32 SL.