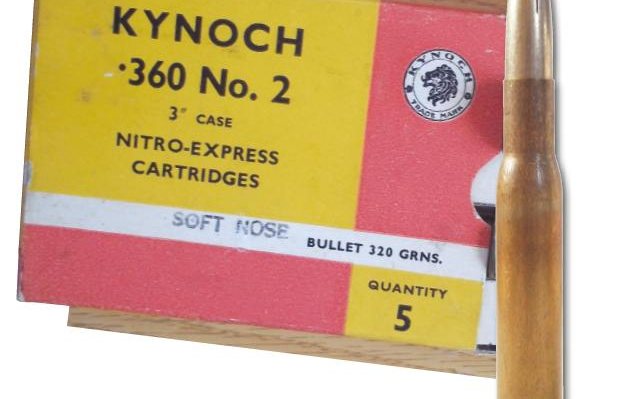 This month, we look back to the time when any self-respecting hunter desired a collection of thick skin wall hangers from Africa and India. English double and single rifles reigned supreme and ‘Nitro Express’ was the jargon term for many of their chamberings. Our subject is the 1905 Eley designed .360 No2 Nitro Express. A rimmed, bottle neck slayer that shone briefly before being supplanted by the better performing and (now) much better known .375 H&H Magnum.

As the name implies, the low pressure .360 No2 was developed as a nitro burner, rather than an adaptation of a black powder design. In common with almost all double rifle cartridges, there was only one loading available, thereby ensuring the same performance and point of impact in a correctly regulated rifle. Highly desirable if the second barrel was needed to stop the charge of a wounded and enraged buffalump! In this instance, the factory loading was (is) a .367” diameter, 320-grain SP (soft nose) bullet, sometimes of split jacket (but not ratchet) design over either Cordite, Moddite or smokeless powder giving 2200 fps out of a 28” barrel – amounting to 3442 ft/lbs muzzle energy.

The Cordite charge was a modest 55-grains, but it’s relative sensitivity to environmental changes rendered the performance less than consistent. A more stable and less corrosive variant called Moddite was introduced by Eley in 1908 and used in the .360 No2 and other calibres up to .450. Over time, the propellant defaulted to a conventional flake design. Ignition was by Berdan primer, in this instance the .254 or Kynoch #40. Although something of a rare breed, the .360 No2 is still in stock and in production at the Kynamco works in Mildenhall, Suffolk. Indeed, I’m grateful to David Little for his valuable assistance.

Given the intended use of the cartridge, the likely volume of usage and the need to achieve very specific performance figures for optimal use, I would find it hard to justify this calibre as a reloading bench project. Even Midway USA can only quote a Hornady Universal De-priming die for the named calibre and I suspect that they’ve failed to understand the term BERDAN! Data is less plentiful than hens’ teeth. Dies would have to be the subject of custom machining. So, saying, Bell and Bertram have listed the calibre in their catalogues. Hornady, Barnes, Woodleigh and a few others produce bullets in .366” diameter for the likes of the amazing 9.3x62 Mauser and the 9.3x74R. Propellant types would be in the same range as for the 9.3x74R. Nah, I’d buy the ammo.

The only thick skinned animals left in the UK are bipedal villains, but they’re protected by Law! So, unless you’re of ‘independent means’ and think nothing of the odd safari, then the applications for this calibre are a bit limited. Furthermore, most rifles chambered for the .360 No2 fall into the highly collectable, big buck’s category. Makers are those such as Manton & Co, W.W. Greener, John Dickson & Sons, A. Hollis & Son and probably Holland & Holland (I’ve seen .360 No2 ammo with their headstamp but not a rifle chambered for it!). If you fancy building your own rifle, then Pacific Tool and Gauge in Oregon can offer the reamers; otherwise, it’s one for the wealthy collectors only. But also, an important piece of cartridge design and development history; rightly or wrongly!