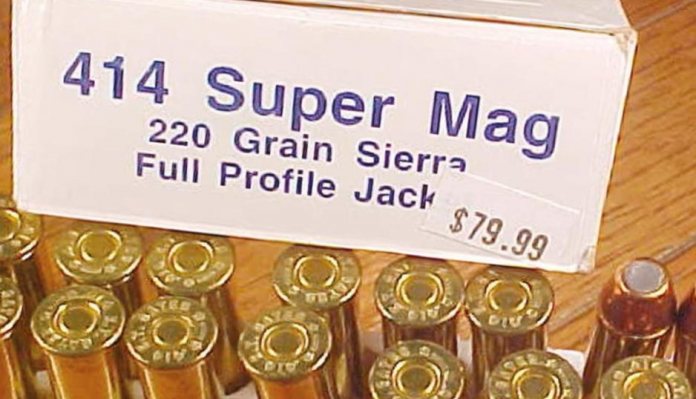 Hard core handgun shooters will need no introduction to the prodigious output from author, wildcatter, legendary big game hunter and metallic silhouette exponent, Elgin T Gates. One of his lifelong missions was to take parallel wall magnum cartridges and stoke them even further; hence his SuperMag family. Regular readers will know of my love of his .357 SuperMag, better known in productionised form as the .357 Remington Maximum. This month, we look at a lesser known example, chronologically the last in his series, the .414 SuperMag or .414 E.T. Gates (also known as the 10.5 x 41R).

As with his other stretched handgun designs, it has a case length of 1.610” with all other dimensions being the same as (in this instance) the parent .41 Remington Magnum, an Elmer Keith/Bill Jordan creation. Gates’ SuperMag variant adopted the same 210-grain JHP bullet design, now delivering some 1500 fps, an improvement of around 200 fps on that of the standard Magnum.

Unlike its .357 SuperMag cousin, the .414 SuperMag never really caught on, partly due to a medium range performance that was not that different to the well-established .44 Remington Magnum. Consequently, the calibre was never adopted by any of the major commercial cartridge producers, although custom ammo producer Black Dog Ammo in Scobey, Montana still list it, loaded to order in Starline brass. Whilst Dan Wesson did commence chambering their 8” barrelled, heavy frame revolver for it in 2000, the numbers were small, due to lack of demand and terminated by their Chapter 11 bankruptcy. In parallel, they also offered ‘factory’ .414 Super Mag ammo, based upon Starline cases topped with a 220-grain TC bullet, now highly collectable itself! Thompson Center were the only other manufacturer to catalogue the calibre, offering various lengths of chambered barrel for their Contender break action single shot arm.

Ammo building is uncomplicated. The parallel wall design allowing the use of a low maintenance tungsten carbide sizer and a straightforward full length re-size operation. Dies are only offered as custom made by Redding, but who needs more? Load data is not widely available but does exist, especially for the 220-grain JHP bullet. Powders would be either H110, AA1680 or IMR 4227. Brass is no longer listed by Midway USA but is still in the Starline catalogue. Large Pistol Magnum primers are a safer bet than large rifle, especially in Dan Wesson revolvers.

For UK use, it would seem reasonable (only my opinion) to justify a Section 7 collection of Dan Wesson revolvers, as examples of novel interchangeable barrel systems. Or simply a collection of arms chambered for the family of Super Mag cartridges. For use in more civilised countries, the .414 would make an excellent straight wall revolver calibre for short range handgun hunting, long range paper punching or better still, felling IHMSA metallic plates – thereby fulfilling the original design objectives of Elgin Gates.