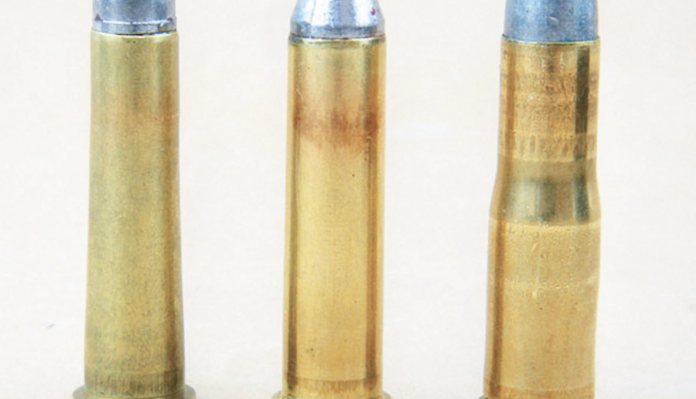 Do the maths and you’ll get to 1876. Birth year of the Winchester Model 1876 Lever Action Centennial Rifle and it’s all-new semi-rimmed, bottleneck cartridge, the .45-75 WCF (not be confused with the .45-75 Sharps – a re-badged Sharps take on the straight wall .45-70 Government). This new cartridge/ rifle combo was launched by Winchester at the Centennial Exposition in Philadelphia and released to the market about a year later. The exposition celebrating the 100th anniversary of the signing of the Declaration of Independence in Philadelphia. The timing was interesting given that the technically better .45-70 Government had been introduced to the world some three years earlier. Indeed, Winchester appeared to acknowledge this point when, in 1886 they introduced the J M Browning designed Model 1886 Lever Action chambered for, amongst others, the .45-70 Government.

Whilst the new rifle offered a healthy rate of fire it was not particularly robust. It limited the potential of the cartridge on the American big game of the day – the bison (aka North American buffalo). Quoted in all the articles on this cartridge is the fact that it was a favourite of soldier, hunter, explorer and 26th American President Theodore Roosevelt for use on grizzly. The factory load comprised 75-grains of black powder pushing a 350-grain LTC pill at 1380 fps, not dissimilar to the black powder performance of the .45-70 Govt. An ‘original’ box of 20 recently selling for just over £1000. Winchester commercial production ceased between the world wars, 1935 being the oft quoted date.

Unsurprisingly, the cartridge is listed in the 2016 Guide on Firearms Licensing Law, Appendix 5 Obsolete Calibres, page 242 – with a caveat that firearms in this calibre may be found in some quantities.

Cartridge case conversion can be done from .348 Winchester brass but is not really necessary as calibre specific tools and brass are available. Die sets were catalogued until recently by all the major makers and secondhand sets are always listed on the interweb. Midway have dropped Bertram brass but still stock Jamison un-primed at under £1.50 a case. Load data is limited but then, as the nomenclature indicates, it’s pretty uncomplicated. 75-grains of BP behind a 350-grain pill is the default. Those wishing to minimise the risk of bore corrosion may wish to adopt the early Lyman recipe of 24-grains of IMR 4198 and the same lead bullet.

Choice of rifles really puts the focus on your budget. Pristine examples of first production Model 1876’s have commanded over $22,000, but would you then elect to actually shoot something that valuable? In the real World you can pick up a nice second hand production 1876 for under £4000. If that’s too rich for you then tatty originals or more modern versions from Chaparral Arms, Cimarron Arms and Uberti can be yours for under £1000. Use of the cartridge is really limited to Classic comps, of which there are a few. As a contender for game or pest shooting in the UK, the best term would be ‘inappropriate’!