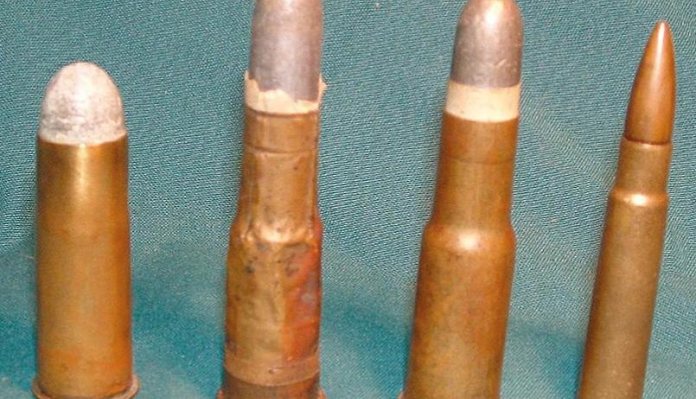 Let’s go back to a time when our treatment of other races and creeds would, in today’s World, have seen some of our military leaders up before the ICC beak in The Hague, justifiably charged with War Crimes. We’re in 1871 with the birth of the .577/450 Martini-Henry, an evolution of the .577 Snider cartridge, initially employing the same steel head and coiled brass body technology but in a distinctly ‘bottle’ shaped cartridge. The original military load comprised some 85-grains of blackpowder propelling a paper-patched hollow base 480-grain LRN pill at around 1320 fps from the single shot falling block Martini-Henry rifle. The use of a coiled brass body was to last just a few years, giving way to the more robust drawn construction with which we are more familiar. The change was largely driven by cartridge extraction problems during the Zulu War. The flimsy coiled brass cartridges expanded excessively during firing and often ruptured. During repeated firing it would become difficult to move the breech block and reload the rifle, or worse, jam solid thereby rendering it useless.

Whilst it’s military use ceased around the turn of the century following the phased introduction of the .303, the huge volume of surplus Martini-Henrys and ammunition released for civilian sporting and big game hunting gave the cartridge a new lease of life. Commercial Kynoch manufacture continued until around 1960, by then based upon cordite and modern smokeless propellants together with a wider range of bullet designs including a 500-grain FMJ specifically intended for use on big game. As time moved on, the game hunting popularity of the cartridge waned, superseded by offerings from H&H, Weatherby, Rigby and others. However, the third phase in its life moved to the fore… historical and classic use from re-enactment to historic rifle competitions, some dedicated to just this remarkable cartridge.

The Kynoch name is again associated with this cartridge as a listed item amongst the Kynamco inventory. Brass can be had from them as well as from Bertram via Midway and others. Tools are listed by Lee whilst Lyman list moulds for ‘stock’ bullets. Commercially made bullets, (both calibre size and for paper patching), are to be found on specialist MH web sites. Onion and cartridge bullet wrapping paper together with various commercial mixes of lube and cellulose fill are also the subject of specialist web vendors. Propellant choice is the subject of intense debate. Whilst attention to historical accuracy demands the use of blackpowder, the substitutes such as Pyrodex and 777 are an alternative for those not holding an explosives licence. The corrosive properties of Pyrodex requiring prompt and diligent housekeeping. A number of nitro propellants are also quoted, especially H4198, although use of the rather fast Trail Boss has provoked much critical debate.

As a single shot cartridge in the MH the need for healthy neck tension is reduced, meaning that hand-fitted paper patched bullets can be employed. With light loading the case can therefore be excused the rigours of even neck resizing for quite a number of cycles. In ‘full house’ mode the recoil is not unlike the .45-70. At least, that was my limited experience about 20 years ago. Current use is primarily about the living history of the cartridge and the main arm chambered for it, the Martini-Henry. Historical/classic comps are therefore the main application for this true classic.