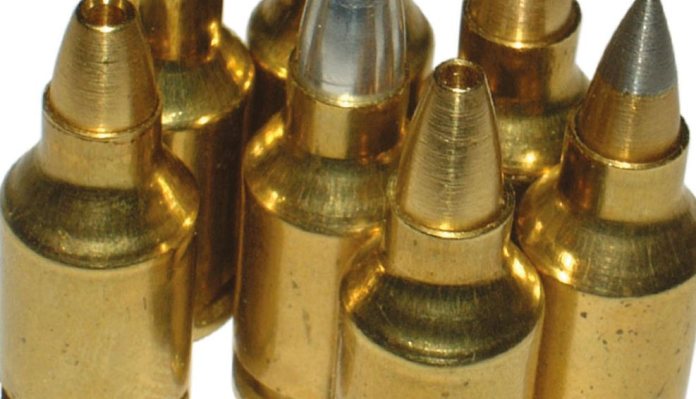 This month we look at a commercial ‘wildcat’ from the imaginative arms and ammo developer Bill Alexander, created during his time at Civil Defence Supply (CDS).

It was at the time when CRISAT defeating ammo and PDW’s were being researched by almost every NATO Alliance country. CRISAT quantifying the penetration specification that would defeat the relatively modest 1.6mm titanium and 20 element Kevlar sheet Warsaw Pact body armour of the day.

Through the late 1980s and into the 1990s, the race was on to produce a winning design. Browning had their 5.7 x 28 FN P90 and H&K the 4.6 x 30. Whilst others were looking to produce auto (MP) combinations of ammo/ weapon, CDS believed that a compact, pistol-based system would prove more practical. The 10mm Auto (Bren Ten) case was selected as the most suitable base. The prototypes were designated 5.56 x 25 and based around a necked down version of the large pistol primed 10mm Auto case. As work progressed, it was re-engineered to employ a small pistol primer and reduced in length to a new designation of 5.56 x 23. Die sets were produced by the custom shop at RCBS. Test weapons were initially just pistols, the Colt Delta Elite and highly reworked Glock 20 doing most of the work. (Lightening their slides was a key factor).

At a later stage a limited batch of H&K MP5’s were re-barrelled by CDS using Douglas blanks. The parallel wall case design and aggressive neck angle giving the cartridge good stacking and feeding qualities in both the Glock and MP5 magazines. The finished ammo being given an Imperial designation, the .224 BOZ. The suffix being added as a homily to one of the codevelopers, his nickname being ‘Boz’, an abbreviation of Boris Karloff - with whom he allegedly bore a resemblance.

The production design settled upon the small primer pocket and 23mm length, with a marginal increase in the upper wall thickness over that of the parent 10mm. The small primer gave Alexander greater internal ballistic flexibility when creating the widest range of performance and projectile combinations. Propellant choice was varied, again dependent upon the projectile and desired performance, but all were conventional commercial double or single base such as Win 296, H4227/IMR4227, Viht N120 loaded to 105%, with Max/Min practical burn rates spanning Alliant 2400 to Rel7. In addition to the basic ball, there were AP tracer, frangible and blank designs. The two primary rounds were the 50-grain jacketed spire delivering (in the reworked Glock) 2000 fps and the 40-grin steel core achieving some 2300 fps. Velocities not dissimilar to the performance of .22 Hornets in a modern arm.

Commercially produced ammo based upon a 55-grain FMJ pill was available for about a decade and collector boxes still appear.

Brass is hard to find in the correct primer pocket/wall thickness configuration but can be made from stock 10mm Auto with suitable dies and the application of an accurate annealing process, albeit with a large primer pocket. Swaging and reloading die sets can be made to order but you would need to specify exactly which iteration of the BOZ you intend to load.

WHAT, WHERE AND WHY?

No commercial rifle or pistol builder has offered their wares chambered for the BOZ. However, one-offs have been made in everything from 1911’s to AR’s. Whilst it shoots almost completely flat at 100 yards it is not going to win competitions! So, why go to the expense of a custom firearm, dies and brass when it cannot be used by you and me for its’ true purpose? My suggestion would be to add examples of the ammo to your collection – and call it quits…. or Boris.