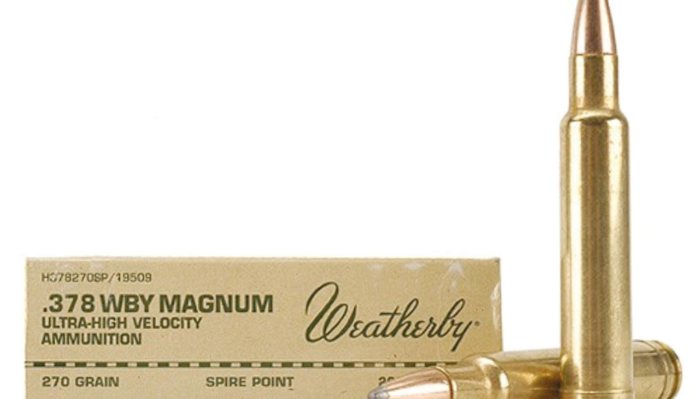 If you’re in any doubt, the year was 1953 and the cartridge was the oft overlooked .378 Weatherby Magnum. This all new bottle-necked, belted, long action monster from Roy Weatherby was intended to be a classic Big Five destroyer. It was aimed at the safari kings of the day, cartridges such as the .416 Rigby. Indeed, Roy rushed off to darkest Africa and promptly took an elephant with it, only to be told he risked prosecution for taking a Big Five animal with an undercalibre cartridge. It was a fact that, at that time, some African countries specified a minimum calibre of .40” (10.16mm). It was a throwback to the stone-age days of cartridge design and ballistics but those were the rules! A more advanced attitude to ballistics now prevails and the base threshold is generally specified as the lower powered (and much older) .375 H&H Magnum, one of the first belted case designs. (The belt primarily designed to achieve a safe headspace dimension rather than for increased web support).

The troubled birth of this cartridge resulted in some of its progeny becoming more famous than dad, from both wildcatters and the Weatherby factory. The legitimate family children including the Weatherby .30-378, .338-378, .416 and .460, whilst the wildcatter inventory includes bonkers creations such as the Ackley .22 Eargesplitten Loudenboomer and the .500 A-Square.

Whilst not originally eligible for universal Big Five duty, the cartridge had more than enough grunt and range for all other extreme safari duties. The original design featured an all new Magnum Rifle primer from Federal, the 215. This was needed to cleanly deflagrate the substantial charge required to propel the heavy jacketed 300-grain SP projectile to almost 3000 fps, delivering some 5700 ft/lbs; a massive 1000 ft/ lbs more than the H&H. The most significant consequence being its remarkably flat trajectory, a desirable accuracy feature when confronted by a charging and bellicose Cape Buffalo.

However, the grunt came at a price; recoil and lots of it! To the best of my knowledge only Weatherby chambers rifles in this calibre. Those I’ve handled weighed in at around 9.5 lbs, much lighter than I expected but still best left to the guide or porter to lug across the Central African savannah. I imagine that’s brutal when fired but then, how many rounds are you going to use? If you need a second shot at that Buff, it may well be the last round you ever fire!

Doing it on the cheap

At between $6 and $9 per round, the cost of factory ammo would be a small part of your overall safari budget but if you really wanted to stuff your lifetime supply of 100-rounds then tools, data, brass, Fed 215 primers and a surprisingly large selection of pills are all on offer. My suggestion would be to load all the ammo and then put the tools on Ebay! As I write this there’s a ‘new’ RCBS set on offer with a ‘Buy Now’ of under $60. I rest my case.

You would have to venture well beyond our shores in order to encounter any game that demanded ordnance on this scale. As for use within the island, the energy levels place it above even the HME category at Bizzers, so you’ll need to talk to David Little at Kynoch Ltd about your zero requirements. An outing with Offas Dyke or FCSA might be possible but in the absence of a bipod and muzzle brake, it could prove to be a bruising experience.