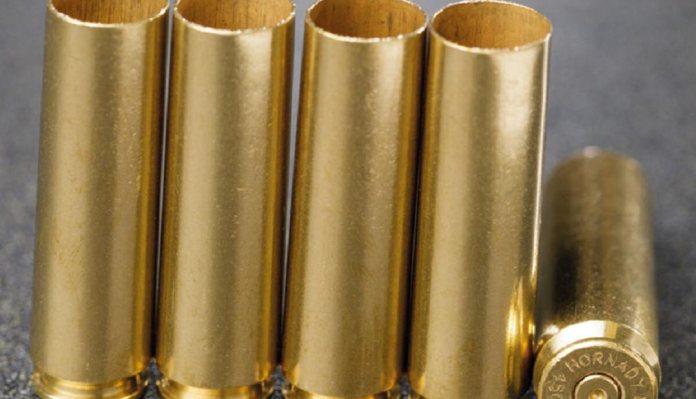 Now known as the .450 Bushmaster, our subject cartridge has travelled an evolutionary path almost as checkered as its Bushmaster Firearms International namesake. It all started when gun-writer and IPSC founding president Jeff Cooper mused on the idea of a semi-auto big bore ‘Thumper’ cartridge, suitable for use in AR15-type platforms and also/maybe serve as a large game round. Given his disdain for the 5.56 service AR, these thoughts were something of a contradiction. However, the challenge was met by former General Motors Engineer Tim J LeGendre of LeMAG Firearms in the early 1990’s, presenting Cooper with a converted AR and a straight wall, rebated rim cartridge that he named the .45 Professional.

Following their initial involvement in the rifle conversion for LeMAG, Bushmaster Firearms approached Hornady to manufacture the cartridge on a commercial basis. Keen to employ their .452” 250-grain Full Point SST Flex-Tip bullet, Hornady requested that the case length be reduced from 1.771” to 1.700”. The redesign was approved by Bushmaster and designer LeGendre and the new version renamed the .450 Bushmaster. The resulting 2200 fps+ cartridge being capable of reliable one shot kills on almost all American game species at ranges of up to 200 yards, maybe a little more!

The productionised Bushmaster AR, branded the XM-15, employs the standard 20-round AR-15 mag fitted with a modified single stack follower to accommodate five rounds. The modified upper is offered in 16” and 20” barrel configurations. Since its inception, other rifle manufacturers have offered this chambering, including Mossberg, Ruger, Remington, Savage, Christensen Arms, Rock River and Radical. Commercial ammo is now also offered by Winchester, Federal, Underwood and Inceptor.

On the bench, the cartridge is pretty straightforward. Despite the case design, you’ll need lube, as all the main die set makers only offer plain steel. Care should be taken not to over crimp, as this can create dangerous chambering issues. The Premium Redding set wisely includes a taper crimper. As for consumables, the range of .452” RIFLE bullets is pretty good and, if all else fails, swaging the diverse range of .458” rifle bullets greatly extends your choices. The use of thin walled .45 cal pistol bullets is to be avoided at all costs. Their jackets are not sufficiently robust for use at Bushmaster pressures and can therefore result in excessive barrel pressures as the bullet base attempts to catch the tip! Load data is not published in all the manuals, so browse before you buy. Unsurprisingly, the Hornady #10 Manual is one of the best.

UK legal considerations limit us to straight pull, single shot or B/A rifle variants in this chambering. The absence of bear, moose and mountain lion also limit the applications! Given the performance similarities between the 450 Bushmaster and the relatively venerable .444 Marlin, and the fact that the Bushmaster has a rebated rim, my choice would probably be a .444 Marlin platform. (The CVA break action is cheaper than chips!).