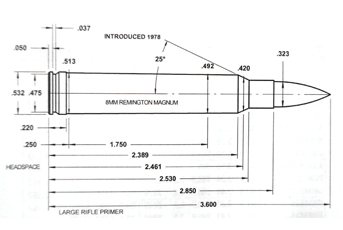 The minimum calibre for ‘big five African game’ varies from region to region. The largest are specified in parts of Africa as either .40 or, more commonly .375. However, for much of the rest of the World an 8mm is deemed adequate. So you guessed it, the 8mm Remington Magnum, which like the 300 Win Mag is a belted case head is under the microscope. Hailed as a fast, flat big game cartridge that did not break the bank or your shoulder it was launched into a rather indifferent market. After all, it was in that funny foreign ‘Metric’ size! For another, most big five hunters of the late 20th Century were not Remington customers, they shopped with Holland & Holland, Purdey, Rigby, Mauser, Weatherby etc. Furthermore, the rate at which they consumed ammunition and rifles was too slow to promote a sweeping change of artillery.

TECHNICAL SHORTCOMINGS
There were technical weaknesses too. The bullet designs initially offered by Remington were not optimal for the intended market – for sure, they were flat shooting, but did not offer the energy transfer of the perceived competition. At the time the .323” pill was not a calibre that was particularly well supported by major bullet makers. Finally, ballistic performance placed this new cartridge squarely between the .300 and .338 Win Mag offerings, both of which were designed to chamber in standard length actions. The smaller being adequate for all the game in the USA and the larger meeting the demands of many overseas hunters.

I’ve only discovered a couple of ‘factory’ chamberings for the 8mm, the original Rem 700 BDL (discontinued after about eight years) and the Cooper Model 56. The web offers glimpses of many custom builds and ‘limited runs’ but with production volumes mostly in the ones and twos they hardly add to the pool of ordnance. Indeed, the numbers are almost low enough to give this a ‘collectible’ status. After an unsuccessful couple of months search here in the UK I finally got my hands on a BDL and factory Remington ammo in Belgium. Dies are still available. Both F/L and neck die sets are listed by RCBS. Hornady also list the calibre. The shell holder is of course common to a host of calibres.

MATERIAL IMPROVEMENT
The dearth of bullet options no longer applies. A wider recognition of cartridges such as the 8mm Mauser, veteran 8mm Lebel and .325 WSM (Win Short Mag.) has kept the .323” diameter alive. Hornady, Speer, Nosler, Sierra and Barnes continue to offer a range of projectile weights and designs. Weights range from 125 to 220-grains, with best big game performance coming from the heavier 200 and 220 SP. The capacious case affords the use of extremely slow propellants – ultimately limited by the barrel length of the rifle.

Hodgdon/IMR 4831, Norma MRP (Magnum Rifle Powder) Accurate XMR3100 and Vihtavuori N160 have all had good reviews over the years. Primer choice falls with CCI 250, Remington 9½M and my favourite, the Federal #215M. If you’re loading the heavier bullets to extract their near 3000 fps potential you’ll need a ready supply of the now difficult to source brass. With just careful neck sizing you’ll still be trimming material at almost every reload. John Donnelly, (The Handloaders Manual of Cartridge Conversions), tells us that cases can also be crafted from .375 H&H by annealing the neck and sizing in an 8mm RM sizer with the expander removed. Trim and chamfer. Shoulder area will fireform on ignition. Good hunting.