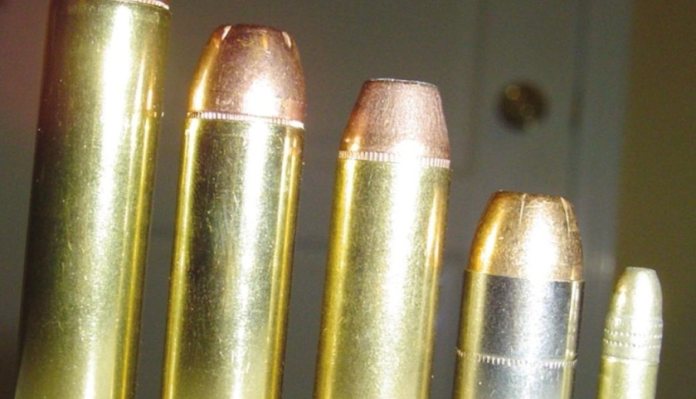 Those of us who have endured the discomfort of firing a .454 Casull cartridge in a 2.5” Ruger Super Redhawk Alaskan, or similar compact revolver, will wonder why anyone would need anything more powerful. Well, in 2005 Hornady joined forces with S&W and Cor-Bon to do just that. Their ‘baby’ was based upon the straight-walled, rimmed .454 Casull case stretched to 1.8”. They christened it the .460 Smith & Wesson Magnum, intended for use in their S&W Model 460 X Frame series of revolvers at working pressures of up to 65K psi. Bonkers or what?

At the launch, S&W claimed that it was the fastest handgun round in the World, propelling a 200-grain pill at over 2400 fps… that’s a muzzle energy of over 2500 ft/lbs and more than my favourite .308 Winchester reload! Not unlike the Alaskan chambered for the Casull, the creators of the .460 S&W claimed that in a handgun it was the “cartridge of last resort”. They elaborated upon this, suggesting that when confronted by a grizzly that was only winged by an errant rifle shot, the .460 S&W Mag would easily drop the enraged Ursus Horribilis. Its wider remit is as a long-range handgun hunting cartridge, for use on large game and pests.

To the designer’s credit, they refrained from packing it with a triplex powder charge - as featured in Dick Casulls’ original concept cartridge. However, having viewed footage of the factory Cor-Bon with its 200-grain Barnes X bullet, being fired from a 2.75” barrelled X Frame, there is no doubt that they’ve used a very fast propellant in order to minimise performance losses from extremely short revolver barrels.

The straight walled design makes life much easier for us, enabling the use of carbide dies – catalogued by all the usual suppliers. Data is present in most of the manuals published over the last decade and quote a selection of widely available propellants. However, the choice will not hide the fact that you’re only going to get around 150 rounds per tub; the .460 S&W Mag is a greedy little sucker! Large Rifle primers are the order of the day as is a hefty crimp, especially for use in any multi-shot arm. Bullet choice may be influenced by the Section 5 limitations on expanding bullets rather than the chosen application. But then, what the heck are you going to do with this cartridge here in the grizzly-free UK? A Section 7/3 revolver would be unlikely, so we’re left with a very limited choice of rifles. Other than custom builds, the inventory is small, the beautiful Big Horn Model 90 Lever Action is yours for between $3000 and $4000. More economical, is the stylish Thompson Center Katahdin model, with its 20” barrel but perhaps the most logical choice would be the Ruger No1 single shot.

As a rimmed round, it does not lend itself to magazine feeding for semi-automatic rifle applications but all is not lost, enter the .45 Raptor. This semi-wildcat from Arne Brennan (better known as one of the co-designers of the 6.5mm Grendel) appeared in 2014.