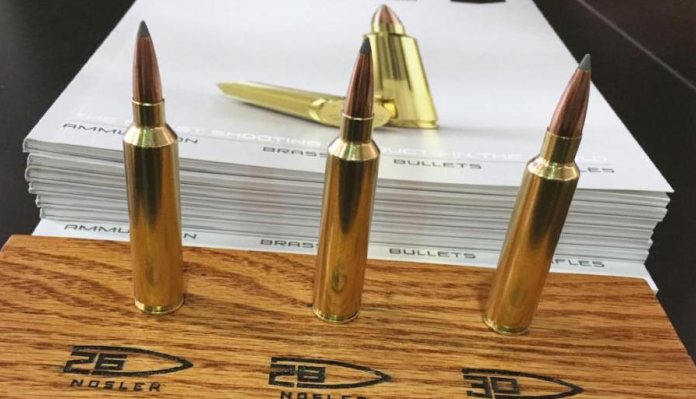 Over the decades, there’s been a steady trickle of cartridges launched by companies better known for other products, especially bullets, reloading equipment and firearms. Brands such as SIG, Hornady, Dillon, Ruger, Blaser, Steyr, Purdey, Barnes and others have exploited the marketing benefits of adding their name to the head stamp of a proprietary calibre. Nosler joined the club at SHOT Show 2014 with their .26 Nosler. It was the first of a quartet of cartridges based upon one of the wildcatter’s wet dreams, the incredibly rugged, veteran, rimless .404 Jeffery case.

Their third creation and subject of this months’ scribble, surfaced at SHOT Show in January 2016, together with new chamberings in their M48 rifles. It’s the 30 Nosler, a .308 Magnum cartridge. Their blurb claims: “The 30 Nosler eclipses the velocity of the 300 Weatherby, headspaces on the shoulder like a 300 RUM, has an efficient powder column like that of the 300 WSM and it’s in the same standard-length action of a 300 Winchester Magnum, while allowing for an additional 200 fps at the muzzle making for the perfect 30 calibre cartridge.” Grand stuff!
Necking down and shortening the Jeffery to .30 cal has delivered a cartridge that bears a striking similarity to a long obsolete design called the .30 Newton (aka .30 Adolph Express). But of course, the Nosler now benefits from a more sophisticated range of propellants that endow it with a dramatic improvement in performance. Their 180-grain factory offering has a listed MV of just over 3100 fps, with more than 2800 fps from their 230-grain pill, both from a 24” barrel

As a .30 cal, the Nosler benefits from the plethora of pills on offer. On the bench, it is very easy to load for, and quite well behaved with nearly all powders of a suitable burn rate for the bullet used.

Anything from Retumbo up to H4831 works well, with IMR 7828 and RL 22 being a couple of the best. Their tip (a bit universal, but what the heck) is to adjust the sizing die to just barely bump the shoulder back between firings to extended working case life. In the tool department, Lee are the only leading makers that do not list this calibre.

The choice of brass is Nosler or Nosler, listed in the ‘States at around $70 per box of 25… that’ll be the best part of £4 a case over here. Primers are Large Rifle Magnum.

As a relatively new player and with a bullet brand head stamp, there are some makers who may baulk at chambering a rifle for it, especially those who make ammo as well! From Nosler, we have the M48 Liberty and Heritage series of rifles. Montana and Christensen Arms are the only other makers currently listed on Gunbroker and only one new maker appeared at the recent SHOT Show in Las Vegas. CZ took the opportunity to announce their timber-stocked, CZ 557 American B/A chambered for it, with first deliveries scheduled for 3rd/4th quarter 2018. At two years old, it’s too early to predict its future. On paper, it offers a performance gain for hunters of mid and heavy game, especially where extremes of range are encountered. For domestic use, it has yet to show its precision potential and offers rather more grunt than perhaps we need!