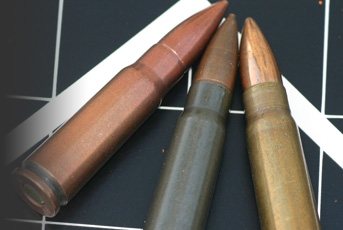 Winchester, NATO, nah… you’re on the wrong side of the Curtain mate. This month’s star calibre is being blatted around the World in over 80 million firearms of one sort or another. Contrary to popular belief, the rimless 7.62 x 39 Russian was not developed in concert with the legendary AKM (AK47) but designed in the early 1940’s for use in the Russian RPD LMG. As a machine gun round it had to be compact and feed cleanly. Designed in wartime it had to be cheap to make and mega-reliable. The 7.62 x 39 (aka 7.62 Soviet) ticked all the boxes. Almost all of the early variants had a steel case, 123gn coppered steel jacketed boat tail bullet with lead/steel core, and were ignited by a Berdan primer. Not exactly a reloading-friendly design!

The original M43 7.62 x 39 bullet measured .311” and is still the optimum size for use in all Eastern European and Asian made rifles. With a velocity of 2400 fps the round was not particularly potent but, as western battlefield tacticians later recognised, had the tactical benefit of high wounding (as opposed to killing stats - dead bodies can be ignored whilst the sight of the screaming wounded helps to demoralise their comrades as well as needing resources to help them).

Getting the western thumbs up was inevitable. Initially the enthusiast/collector market hoovered up examples of former Iron Curtain ordnance and matching ammo. In America, the late Cold War survivalist movement required every aspiring cave dweller to have a Rusky gun and ammo! The cheap and plentiful ammo supply therefore making it an attractive option for U.S sporting arms makers, with a plethora of rifle chamberings arriving in the 1980’s. The 1987 appearance of the Ruger Mini-30 leading the popular charge. Within a few years almost all of the major rifle makers had included it in their lists – mostly barrelled for .308”. If in doubt about diameter, you should read the makers data or slug the barrel. Speer make a .310” 123-grain bullet and Sierra offer a .311” x 125-grain SP if you find you need one.

Ammo manufacturers were not slow to capitalise, Wolf, TulAmmo, Brown Bear and even Hornady offering 122/123/124-grain variants with polymer-coated steel cases ‘faithful’ to the original, right down to the Berdan primer, (it discourages attempts to reload). However, hand loaders were not forgotten, with die sets from Hornady, Lee, Lyman, RCBS and Redding, and Boxer primed brass from almost all the usual brands. Federal, PMC and Winchester offer Boxer-primed ammo. With the light bullets, fast powders are the order of the day. IMR/Hodgdon 4198 loaded to 100% density and Alliant Reloader 7 are two good performers.

Several well established wildcats can trace their family line back to the 7.62 x 39, including .220 Russian and the super accurate .22 and 6mm PPC chamberings and the newer 6.5 Grendel too. Ballistics and performance make this cartridge extremely versatile. Game, vermin and short/medium range target applications all appear its C.V. As a plinker it can offer low unit cost and comfortable levels of recoil. Whilst corrosive primed ammo is now a rarity, some of the eastern European brews are rather dirty.

In the UK it is more seen in the manually-operated, straight-pull AK47 variants like the Saiga M3 and M4 rifles, though accuracy is not that impressive. For hunting achieving the required 1700 ft/lb lower limit is not easy so it’s probably only good for muntjac and foxing.