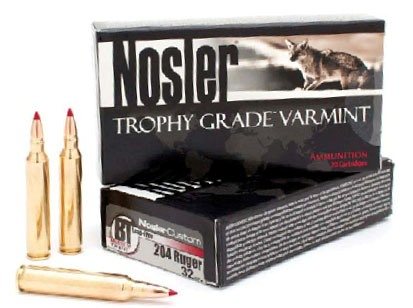 Over half a century after the .222 Remington Magnum first saw the light of day, it was to become the parent of the first commercial .20 calibre design, the .204 Ruger. This new calibre was the result of a collaborative effort between Ruger and Hornady. With a revised shoulder angle and necked down to take a new 204 diameter, 32-grain V-MAX bullet the capacious .222 Rem Mag parent generated a remarkably flat shooting velocity in excess of 4200 fps. Launched at the 2004 Las Vegas SHOT Show, it was to win the plaudits of the American shooting industry, gaining the Shooting Industry Ammunition of the Year Award. It started a near decade long series of similar awards for Hornady ammunition products. It was intended to improve upon the varmint and small game hunting abilities of the earlier (1971) ‘own brand’ development of the .222 Rem Mag case, the .17 Remington. Furthermore, it was billed as a barrel-friendly, reduced recoil, low cost challenger to the established .224 cartridges, from the Hornet and Swift to the .223 and .22-250. It delivered.

In stark contrast to the ‘not invented here’ attitude towards some ‘rifle maker’ branded cartridges, the 204 Ruger has been chambered by the majority of volume rifle manufacturers, a testament to the steadily growing popularity of the design. The list of makers now including CZ, Cooper, Howa, Remington, Tikka, Sako, Savage, Browning and of course, Ruger. In the USA, there are ARs chambered for it too, but I’m not aware of a UK straight pull or MARS option, although the calibre would not be difficult to chamber. So, something for everyone and every pocket.

After a couple of bad medium range experiences when foxing with 17 calibres, I have to say that the 204 would now be my smallest calibre choice for that pest. But there’s the problem; what else would I use it on? It’s overkill on bunnies and ineligible for deer. If you’re just considering your first fox rifle, then it does offer low recoil and economic reloading.

On the bench, it is remarkably vice-less. The brass is strong and unless you’re pushing the velocity envelope, extremely durable. The claimed mega velocities from factory ammo are all achieved with a custom propellant not available to mere mortals like us. However, it is allegedly imbued with copper fouling removal properties, putting CFE223 in the frame as a near equivalent for home loading. Indeed, it is one of the powders listed in the Hornady manual for use with their middle weight bullets.

However, Viht N-140 seems to offer the greatest versatility. 20 cal bullets are now listed by Berger, Remington, Sierra, Barnes, Nosler and of course, Hornady. As a guide, Midway list brass from Hornady, Winchester, Remington, Nosler and Norma. Almost all the current manuals offer data, but check before you buy. Tools are in the catalogues of Lee, Redding, RCBS, Hornady and several others.

A trawl though the Interweb reveals an active and dedicated forum for the .204 as a varmint round but benchrest sites seem to have little enthusiasm for it. So, there you have it, in the absence of groundhogs, coyotes, feral dogs and wolves, it’s a case of foxes or foxes!

Next month, we trundle back to the 19th Century and the days of the black powder .45 Schofield.