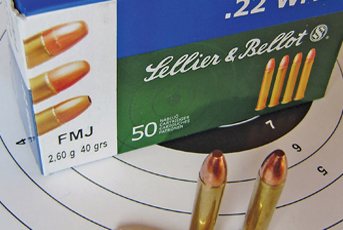 Lets downsize this month. No use looking in your manual – it’s not there. The subject is the .22 WMR, (Winchester Magnum Rimfire). A bloomin’ rimfire? Yes, but contrary to popular belief it is NOT a bog standard .22LR on steroids. The WMR heritage starts with another, rarer twenty-two, the WRF or Winchester Rim Fire. This was a cartridge with a thicker, stronger wall and larger outside diameter than the 22LR. This distinction was of vital importance to those who owned Taurus & Ruger revolvers chambered in .22 WMR as they were supplied with a separate cylinder chambered in .22

LR. Use this one in a WMR chamber and the case often splits and jams! Owners of rifles chambered for .22 WMR be warned.

Winchester launched the cartridge at the Spring 1959 NRA (of America) Meeting and at $2.60 for 50-rounds it soon caught the attention of cost-conscious varminters. With around 2,000 fps and 350 ft/lbs from a 40-grain copper-clad HP pill it offered rifle performance that had previously only been available from centrefire cartridges. The first commercially successful rifle to be chambered for it was the single shot B/A Colt Colteer that appeared in late 1959. Mossberg followed with their single shot 620k and 5-shot 640k Chucksters. Winchester was slow to hit the market with their Model 61 Slide Action. H&R soon followed with a couple of models. Since then the calibre has found its way into the catalogues of almost every major rifle and revolver maker.

From day one there were reloading articles from prolific wildcatters like Kent Bellah and Ed M. Yard. Bellah wrote about how to pull the .2245 40-grain pill and load it with the 35-grain swaged jacketed Sisk bullet ahead of a charge of the now obsolete Hodgdon H240. However, I would not recommend it! Ralph Sisk of Iowa Park, Texas was the .22” cal bullet guru of his day, his designs including the notable jacketed expander bullet constructed with a steel ball to act as an expander. Indeed, he also deserves to share credits with Parker Ackley in the early development of the .17 pill.

The cartridge was soon taken up by most of the major manufacturers in various bullet weights and designs from 30 to even 50-grains. Styles soon catered for all tastes, including a jacketed TC for use in tube mags and a number of Spire and SP constructions. This broad design range extended the usability of the cartridge to embrace light game hunting, target shooting and personal defence, ensuring that this would become the only enduring twenty-two to appear in the 20th century. Only now is it being challenged by the 17HMR and in the UK overtaken by it too!

Whether you’re looking for an original ‘Colteer’ or a brand new hunter the choice is wide. Ruger still offer variants of their 77/22 rotary mag in .22WMR. CZ, Savage, Brno, Marlin and others also have the calibre in their catalogues. Plus it’s the most powerful semi-auto rifle option in the UK too!