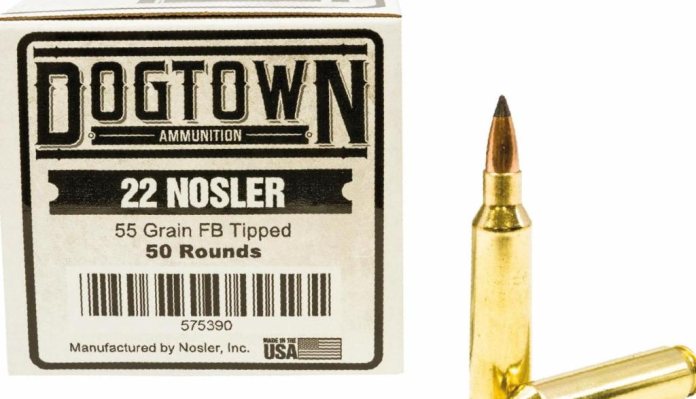 When it was launched at SHOT Show in 2017, I tried hard to understand the thinking behind the .22 Nosler. Then the light came on; it must be viewed in an all-American context. The AR-15 platform is now the most popular in the USA. With a plethora of replacement uppers, mags and bolts that enable them to chamber a bewildering number of both commercial and ‘common wildcat’ calibres. So, why not a ‘hot’ .223 Rem that uses the stock bolt and existing 6.8 SPC magazines?

Nosler blurb claims some serious performance stats for their creation. With CFE223 powder they quote a speed of almost 3100 FPS for their 70-grain HPBT. Compare that with the Hornady data 2800 FPS for the same pill and powder in the .223 Rem cartridge from the Service Rifle (AR-15) and you get the idea. An increase of around 11%, means it delivers .22-250 performance!

So, what’s the cost, as this performance gain has to be the result of either increased pressure or case capacity? However, if the Nosler case fits the stock AR bolt, then we seem to have a capacity conundrum! Some scribes state that the Nosler is a blown out .223 Rem; try that and you’ll blow the case and probably the gun. The parent is actually the 6.8 Remington SPC, already wildcatted to a .224 Cal as the .22 PDK, the ‘Prairie Dog Killer’. They made the case fit the stock bolt by simply rebating the rim to .378”. In order to prevent a muppet from installing a .223 Rem (or 5.56 NATO) in his new Nosler chamber, the Nosler head to shoulder length is 1.389” instead of the 1.438” of the .223 Rem, that’s 0.049” shorter.

Feeding your new .22 upper with factory ammo could prove expensive. Nosler have the exclusive rights to their baby at present and will ask around a US Dollar per round, probably translating to a £1 per round here in Blighty. There does appear to be another brand, Dogtown Ammunition, but this is actually a Nosler product. So, to keep your finances under control, we need to break out the press and dies. Trustworthy data from Nosler is on the interweb and quotes a wide range of currently accessible powders.

RCBS, Redding and Hornady all quote the calibre in their tool catalogues. As for bullets and primers, you’re spoilt for choice. Brass will be either Nosler or (my guess) Dogtown. It’s worthy of note that the ‘Most Accurate Load’ asterisks appended to the Nosler data mostly come from the maximum charge. DO NOT start with these, work up to them from a sensible starting point, keeping note of pressures and velocities.

In the absence of any personal experience with this cartridge I’ll quote trusted reviewer Richard Mann from the US NRA Shooting Illustrated Magazine. “The real question is if the 22 Nosler provides any real practical advantage over the .223 Rem. in the AR-15 platform. Based on my testing, if you’re shooting at extended distances, the answer is a resounding yes. With the 77-grain Custom Competition bullet at 500 yards in a 10 mph cross wind, you’ll see 16.8” less drop and some 5.3” less wind drift than you would using Nosler’s 77-grain Custom Competition factory load for the .223 Rem. The bullet will also strike the target with 47% more energy.” That’s good enough for me!