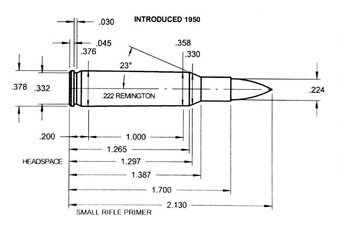 The late 1940’s through the 1950’s witnessed a period of notable ammunition design and development. Not only were the wildcatters busy innovating with surplus arms, ammo and materials from the recent War. Many of the major American manufacturers, keen to maintain wartime production levels, were hard at work on new products. One such cartridge was the ground-breaking .222 Remington. Launched in 1950 it was the World’s first truly rimless .22 centrefire. The design was totally new, propelling its 50-grain spire point .224” pill at a varmint-demolishing 3100 fps.

It rapidly became known as the Triple Deuce or Triple Two and was soon attracting the attention of a wider shooting audience. Holy moly, this thing was dead accurate and almost pan flat out to well over 200 yards. Paper punchers began to work with its stunning potential and reports of one hole groups at serious distances became commonplace. Benchrest had a new wonder cartridge. It was to be several decades before the various PPC iterations took over the crown.

THINK OF A MAKE

Remington had launched the cartridge with a chambering in their Model 722 bolt action. It wasn’t long before almost every other maker on the planet got the message. Indeed, it’s now hard to think of an established rifle maker that has not chambered the calibre at some time or another. Many custom makers were attracted to the benchrest potential as well, leaving us with a bewildering choice of new and used rifles in the market place. From single shot break actions at £250 to fabulous custom builds at £2500 and rifle shotgun combo’s from around £350, there’s something suitable for your needs. Hmm, not much for us lefties though!

There are many forum pages devoted to the .222 vs. .223 debate. Read them all and you’ll not get a definitive answer - just bloody confused. If you’re only ever going to use mil surplus ammo, want shooting on the cheap, are not concerned with ultimate accuracy and don’t live in France or Spain (where mil cals are controlled) then the marginal performance benefits of the .223/5.56 will probably light your candle. For those keen to reload, looking for the best accuracy and a piece of classic history then the .222 Remington is a no brainer.
CHEAP TO RUN

Factory ammo is legion. From Nosler’s interestingly named Varmageddon 40-grain HP and tipped designs (marginally light for the twist of some Triple Deuces) to Lapua’s 55-grain FMJ heavyweight, you’ll find something to suit all of your needs. For your bench there are tools and consumables from everyone. Whilst commercial .224” bullet weights range from around 40 to 90-grains, the case capacity, internal ballistics and likely rifling twist of the .222 Rem really limit the maximum safe and practical weight to 55 or 60-grains. The cartridge is frugal with propellant, giving awesome bang for the buck. As an example, it’s possible to build more than 360 rounds of 50-grain, 3000+ fps ammo from one tub of H4198. The long case neck offers much more than one cal support and greatly aids the natural accuracy of this legendary design.

This is not some arcane museum piece suitable only for anoraks. It really is a living high performance cartridge that offers sublime accuracy, longevity, history and enough performance to deal with everything from bunnies and foxes to Scottish roe. Not forgetting that it still gets the job done as a superb entry level benchrest calibre.