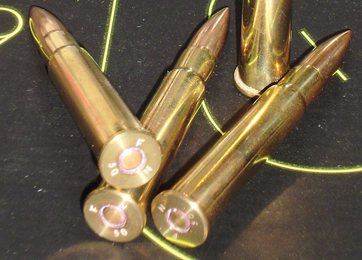 I was rebuked by a reader for failing to give due recognition to this cartridge when reviewing the American .30-40 Krag. This month I put the record straight with a look at the remarkable .303 British, sometimes known as the 7.7 x 56R.

Adopted in 1889 the original MkI design was based around black powder, a 215gn RNFMJ bullet and either a Boxer or Berdan primer! Indeed, the slim, rimmed, bottleneck case design constraints meant that the 71.5gn BP charge was too bulky to be poured in; instead it had to be compressed into a firm single pellet. Two years later the MkI Ball Cordite cartridge was introduced, initially propelling the same bullet. The stick cordite charge increasing velocity from 1800 to 2000 fps. It was found that the thin wall jacket was prone to disruption and a thicker wall MkII design was incorporated into both the black powder and cordite rounds.

A revised soft point design was adopted in 1899, the MarkIII. Upgraded hollow point versions followed, the MarksIV and V, both still using cordite. Early in the 20th Century the MkVI appeared based around the earlier RN design. flake nitro propellants and composite core jacketed bullet designs mixing lead/aluminium or lead/cellulose plastic. Tracer, armour piercing, incendiary and explosive variants appeared, together with dedicated machine gun designs. By WWII cordite was being phased out and improved nitro propellants appeared. Peak military development was the 1938 MkVIII with its 174gn, 2400 fps spitzer-style boat tail bullet. Again, there was production using both large Boxer and Berdan crimped priming. It was replaced as the service round in 1957 by the 7.62 NATO.

The 303 nomenclature refers to the bore diameter measured between the lands, with the current design bullet diameter being .311”. Dies are in the catalogues of all the major makers, as are bullets and moulds for the lead loading fans. Sierra, Hornady and Speer are just a few of the makers, with weights from 125 to 215gn. All the manuals quote data for the cartridge with Hodgdon also offering data for 150 and 180gn gas checked designs. Slugging some early rifle designs may reveal tight bores that will work with the wider range of .308 pills on offer. But correct seating and adequate neck tension issues must be carefully addressed. Working within the loading data will provide you with a safe and viceless round. Propellant choice is wide with H335 topping the charts in most manuals.

Classic rifle comps abound, as do good shootable examples of many of the early rifles. The Lee Enfi eld family being the most obvious and populous models. P14’s, Martini-Enfields, Parker-Hales and even the odd Winchester 1895 Lever Action are also to be had. In the fi eld the 2300+ fps performance of the 180gn cartridge makes it a capable hunter… providing you have a robust modern rifle such as the Ruger No1 Light Sporter.

Whilst many thousands of ‘spam-canned’ rounds are still in circulation they are often based around cordite and corrosive priming materials, demanding diligent and prompt rifle hygiene! Many are of non-UK manufacture and date back to the 1930’s. They may be of historical interest but should be seen and not shot!