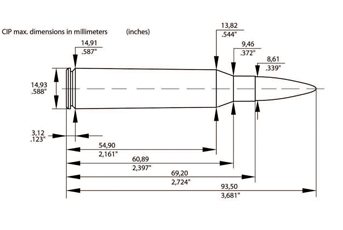 Born in 1983 as an R&D effort by the now defunct Research Armament Industries (RAI) to find a better sniper round, the .338 Lapua Magnum was nearly still-born. In common with the recently reviewed .416 Remington Magnum it traces its ancestry to the legendary rimless .416 Rigby. However, unlike the designers of the .416, RAI rejected the addition of the belt… almost costing the life of the fledgling .338.

RAI did the math and arrived at a projectile of 0.338” (8.6mm) and 250-grain bullet at 3000 fps as the optimum to achieve their objectives. This was specified as a minimum working range of 1 kilometre with enough grunt to penetrate modern body armour and still make a kill. The .416 Rigby case had a lot going for it, designed around the use of Cordite it was capacious and relatively rugged. Almost all RAI did was to neck it down to the new calibre.

They contracted Brass Extrusion Labs Ltd., (BELL) to make the casings and Hornady to craft the bullets. RAI built the rifle and tests of the .338/416 as it was then known began. At well below the target performance case integrity was an immediate issue, especially base wall and lower web stretch. The story goes that a desperate and financially stretched RAI contacted Lapua for assistance. Sadly, even they couldn’t wring the desired performance from it and things went quiet for six years. 338 LAP MAG Enter the .338 Lapua Magnum as we know it today. A subtly re- engineered case now provided the necessary structural integrity and afforded even greater performance from its 250-grain, Lapua Lock Base bullet. Co-development credits must go Portsmouth- based Accuracy International. Given the established military connections of both Lapua and Accuracy Intl, and the then prevailing Middle Eastern tensions, its adoption as a specialist weapon system was almost a formality.

Cartridge and rifle development continued apace, and although no SAAMI listing has been issued, a C.I.P. rating of 420,000 Mp’s exists. The standard 250-grain load gives an astounding 1500m supersonic range. However, the nature of its prime application means that many non C.I.P. cartridge/rifle combinations now exist, some claiming a supersonic range of almost 2km. Little wonder that it now holds the record for the longest range confirmed sniper kill in history (2,475m in Afghanistan in 2009 – by a Brit) and is now in military/police/security service in almost 30 Countries.

POPULAR ACROSS THE BOARD

Civilian interest in its stunning long range abilities grew rapidly, with Sako, Barrett, Steel Core, Blaser, AI, RPA and others offering factory rifle chamberings in addition
to many custom builds, especially from the USA. Whilst ineligible for F Class in the UK it qualifies for the sub .35 Cal US F-Open rules.

However, the brutal recoil of even 10kg of un-braked .338 Lap Mag offers more bruising than one man can stand!

Die sets are listed by Hornady, RCBS (Standard and Gold Medal), Redding Competition, Lyman and Lee. Bullets ranging from 200 to 300-grains are offered by Hornady, Lapua, Nosler, Sierra and Speer as well as solids (mono-metal) from Barnes and other specialist manufacturers. Loading data is harder to find, Nosler and Hornady have material on the web, as do a number of the US reloading sites such as LoadData. (Note their disclaimer). Construction is very expensive given the relatively short case life and big bucks components.

New (unfired) brass is around £2.00 per case, as little as 80p for once fired. Quality bullets are typically 50p each. Powder choice is limited and a 1lb tub will only make about 80-rounds. Ammo is offered by Prvi Partizan, Norma, Lapua, Hornady and Remington amongst others but can cost over £3.00 per round. If you eke out your case life then handloads will work out at around £1.00 a pop, ignoring your time and the cost of the tools. The rewards? Well, consistently clanging a 6’ steel plate at 3?4 mile on Radnor Range with a braked RPA topped with a big Nightforce generated a monster grin factor. If I had the dosh I’d join Offa’s Dyke Rifle Club tomorrow and rush off to Kent for .338 LM Thunderbolt as soon as the variation arrived.