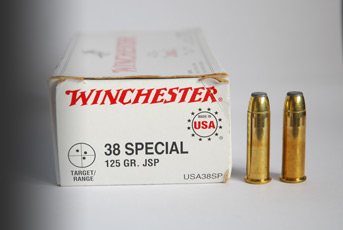 One of Smith & Wesson’s finest cartridge designs, it was introduced in 1899/1900 as a ballistic development of the .38 Long Colt cartridge. It is said that 1899 news reports of the battle performance deficiencies of the Colt black powder round encouraged the creation of the Smith & Wesson .38 Special. Sadly, these critical reports lead to the US Military readopting a .45 calibre in preference to the new offering from S&W. A calibre that was to prevail until the end of the century.

Originally designed with a 21-grain black powder charge the Smith & Wesson .38 Spl. employed a Boxer small pistol primer and a 158-grain, round-nosed lead bullet housed in a rimmed, parallel wall case. A series of matching, re-chambered (from .38 Long Colt) revolver designs were launched, especially the notable Military & Police (M&P) Hand Ejector model. Their popularity increased by the fact that they could still chamber and fire either cartridge. Later, and perhaps better known as the Model 10, it was to become the most prolific revolver design in history with over 6 million derivatives produced.

Within the first year the cartridge design was revised to make best use of the new, nitro-based smokeless propellants that had come to market. The diverse abilities of this cartridge best illustrated by the subsequent development of precision wadcutter target rounds and, at the other extreme, semi-jacketed hollow point hunting and man-stopper cartridges. The .38 Spl became the default for police and security forces in almost every corner of the planet for much of the 20th century.

Low Recoil and Cheap To Make

The .38 Spl is still one of the most commonly hand-loaded cartridges in the world. According to claims in current reloading manuals the .38 /.357 die sets outsells its nearest rival by 2 to 1. The black powder legacy gives a generous case capacity that lends itself to experimentation with a wide range of propellant speeds but at the risk of accidentally double or even treble charging. The choice of bullet designs, even allowing for the silly UK ban on hollow and soft point, is considerable. From swaged 148-grain wadcutters through cast, gas check, copper-washed and jacketed examples ranging in weight from 90 to 200-grains.

For the copper wash pills in longer plumbing I use the hotter Federal primer and IMR4227. With the cannelure-free copper wash designs I always use a taper crimp on the neck as a separate operation after seating the bullet. Remember that almost all the manual data refers to standard revolver barrel lengths. With the top book loads it is easy to achieve transonic velocities from our longer barrels – these will be wasteful and inaccurate – back off the charge weight. As for brass life, well, 20 loads are not beyond the limits of the commercial cases. However, for me regular shooting in Belgium has a major plus… almost no-one reloads and almost everyone shoots .38 Spl. I just have to empty the bins and batch the headstamps!