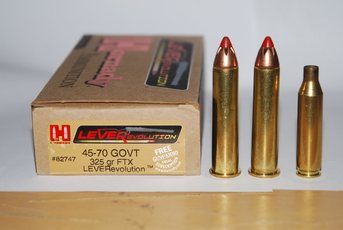 One of the great, big bore, American military rifle cartridges - the .45-70-405 Government was developed by Springfield Armoury during 1872/1873 as a successor to the .50-70. However, it bore little resemblance to the brass-cased, Boxer-primed calibre we know today. It followed the standard nomenclature of the day with a .45”, patched, lead, hollow base 405-grn bullet over 70-gns of black powder. Hence its name; 45-70.

The original case was drawn copper cup with a folded rim and appeared to be a rimfire design. An easy mistake as the head was devoid of a visible primer. However, the inside contained an internal centrefire primer staked into place. The iron percussion cup serving to substantially stiffen the base and lower wall of the otherwise flimsy design. This was the Benet priming system named after Col. S V Benet. Whilst reloading this design is seemingly impossible the enterprising Native Americans (Indians) found a way, requiring the U.S. Army to issue an order for soldiers to crush all spent cases!

Following long range tests at Sandy Beach the bullet weight was increased to 500-grns with a revised base design in order to generate better long range performance. Patched lead was used to reduce fouling and allegedly, help overcome variation in bore diameter. The Benet-primed cartridges were dropped in mid 1882 in favour of a brass-cased Berdan design. This later gave way to the more familiar Boxer primer that exists to this day.

Cartridge designs were also optimised for use with the wide variety of rifles chambered for it, from the famous Springfield Model 1873 ‘Trapdoor’, the Gatling, various carbines, Marlin Lever actions, Ruger falling block and a number of traditional bolt action models. Today some major manufacturer offer rifles in this chambering, Winchester, Ruger, Marlin, Thompson Center and Pedersoli. Unusual are the Mauser M98’s and oddest of all the Gibbs ‘Summit’, a reworked Enfield No4.

Factory ammo is available from Winchester, Hornady, Remington, Federal, Norma and Corbon although most offerings are soft or hollow point for hunting. Dies, bullets (lead and jacketed) and reloading components abound. For most applications it is possible to just neck size the brass, increasing case life and improving performance. The black powder legacy endows the case with large capacity, providing access to a wide range of propellant burning speeds.

In the UK the 45-70 is mainly seen as a classic, target round, however in the USA it’s also very much alive for hunting as the massive knock down offered by those big bullets does well on large game. Reloaders need to be aware that there are essentially four loading levels that match the age/build of the guns that have been and are made for it. Level 1, original and reproduction BPCRs – Sharps and Trapdoors etc, Level 2 Winchester 1886 original and reproduction, Level 3 Marlin 1895 and Level 4 Ruger No1 and Mauser M98. Factory ammo is down loaded to suit the weaker actions but if you have an original I would get it checked out first.