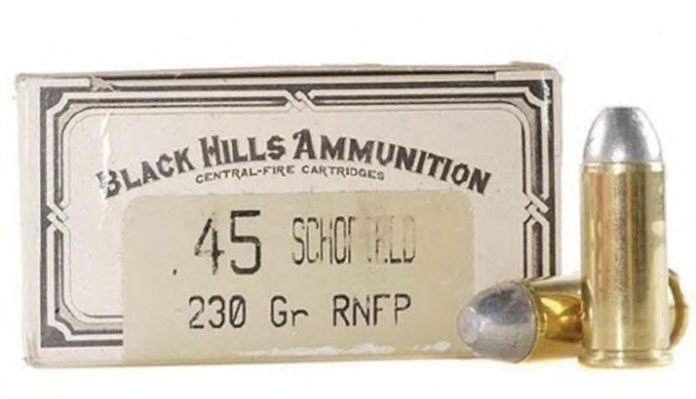 Are we looking at a cartridge or a revolver? Schofields’ input to the Smith & Wesson development of their single action Model 3, top-break handgun and ammunition really had more to do with the development of a practical cavalry revolver than the actual ammo. His contribution was intended to improve the rate of fire, mechanical reliability, ease speed of reloading and practical accuracy of the arm, especially in the hands of a horse soldier. The resulting cartridge design was determined by the cylinder dimensions, the propellant volume (black powder) and the ballistic performance of its competitors – including the recently introduced and well received .45 Colt cartridge and their Peacemaker (Model P) revolver.

The result was the .45 Smith & Wesson cartridge (only later nicknamed the .45 S&W Schofield), introduced in 1875 and adopted by the Army that same year. It was a broad rimmed, parallel wall, internally primed design loaded with, of necessity, a truncated 250-grain lead flat point bullet. The drawn copper case featured a pinched/crimped wall indicating the presence of a Benet primer.

S&W claimed the USP of this revolver/ cartridge combination was its speed of use – under 30 seconds for a cavalryman to reload, almost half the average time required to service a Peacemaker! As for performance, it only delivered around 280 ft/ lbs, 70% of the muzzle energy of the Colt. However, when fired off-hand from the back of a horse it offered lower recoil and more than acceptable accuracy at typical battle ranges. On the dark side of the Army adoption was the fact that Lt Gen John McAllister Schofield, George Schofield’s older brother, was allegedly able to influence the purchasing choices of the Army at the time. Who knows?

When the Frankford Arsenal designed Benet primer was dropped in favour of the new Boxer system, the cartridge was given something of a makeover. Initially, the case material remained copper and housed a small primer (possibly experimental Berdan) but within a few years became brass fitted with a large Boxer primer. The rim was slimmed in order that it would chamber and extract from the longer cylinder of the Colt revolver. In 1887 a dedicated Army .45 cartridge, the M1887 Ball, was introduced as ‘a one size fits both’ to resolve the ordnance materiel provisioning issues. Of course, the reverse was not possible, the .45 Colt cartridge being too long for the S&W chamber, thereby earning itself the revised slang title of .45 LONG Colt. Ironically, the M1887 Ball round was short lived, the Army cancelling the contract to standardise on the Colt Single Action Army revolver and .45 Colt cartridge. Some you win!

If you’re lucky enough to own a real Schofield revolver and have the legal opportunity to use it, remember that it is a Black Powder arm. Also remember, for safety sake ALWAYS keep a fired case or empty chamber under the hammer of a loaded original! Repro’s from the likes of Uberti and Navy Arms may qualify for S7 use as part of a Schofield collection, but you would need to take further advice. Nitro cartridge data is present in all my manuals and BP load data exists in reference works such as COTW. Dies, brass and bullets are listed by several of the popular makers and factory ammo is still offered by Black Hills Ammunition, HSM and Ultramax. In the wider World, the .45 S&W Schofield can be used in a wide range of lever actions and revolvers chambered for the .45 Colt cartridge. It’s a bit clunky in my Rossi but does work. A 240gn LRN with 4.5-grains of Hi-Skor 700X gets the job done. Just increase the cleaning frequency.