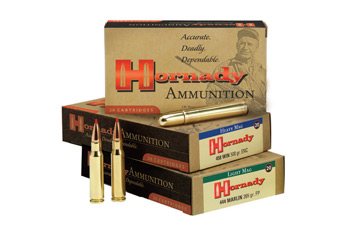 Winchesters’ 1956 launch day claim that their 458 Win Mag was the largest cartridge chambered by an American company lasted about two years, at which time it was gazumped by the .460 Weatherby. Although often described as straight wall, it is actually a belted taper wall creation that used the .375 H&H case as its design parent. Fire this from the prone or against a tree and it will remove or break large parts of your body and is not for the faint hearted!

There is a popular belief that many Americans are suspicious of ‘metric’ calibres. No such problem for the Imperial .458. The standard, long-action Winchester Model 70 African rifle has been followed by chambering from across the whole spectrum of makers, from the bespoke to the mass-produced. Names include BSA, Ruger’s No1H and Model 77, Browning, CZ 550, Weatherby DGR, Remington 700, Sauer Mod 90, Holland & Holland, Dumoulin and Steyr.

Amongst the custom builds are also converted Model 98 Mausers that tend to be a bit fragile if worked hard. Whilst lightly used popular makes can be found for around £700, asking prices for bespoke works of art can exceed £30k.

This is hardly a ‘shoot ‘em up’ calibre for at least two reasons, cost and comfort. At a minimum of £3.50 per round and with a seriously stiff recoil in an 11 pound rifle the .458 Win Mag is functional rather than fun. In addition to Winchester, branded ammo is offered by all the big names including Hornady, Nosler, Norma, Barnes, Federal with Trophy Bonded Bear Claw own brand bullets and Swift A-Frame. The original factory round employed a 500-grain FMJ pill and most jacketed brands still use that weight when offered for big five use. For thinner skinned game in Africa and North America the makers offer JRN designs from 350-grain upwards. Solids have found favour in recent years, the Barnes big five offerings ranging from 400 to 600 grains.

Within a year or so of its launch there were reports of the odd cartridge misfiring; not good when you’re about to have an elephant wipe its feet on you. I’ve no evidence of scientific proof, but the popular belief was that the compressed powder charges were ‘clumping’; something deduced by the writer/hunter Jacques ‘Jack’ Lott. It was a fact that the 5000 ft/lbs, 1900 fps performance of the 500-grain pill required the use of a significantly compressed charge. His solution was to go back to the parent case and blow it out to .458 with no reduction in length. It resulted in the .458 Lott, more capacity, bigger bang and another 300+ fps.

On the bench the cartridge is a bit of a troublemaker. Whilst the choice of modern propellants has obviated the need to employ heavily compressed charges, the case itself can be a frustration. The presence of the belt makes it difficult to full length resize with standard dies. This is compounded by the fact that the weakest point in the case wall is just above the belt and soon becomes a ‘tight’ spot in many chambers! The neck wall thickness is modest and can easily collapse when seating the bullet. Three or four reloads are all you should expect. Choice of powders, bullets and tools is wide but you’ll still be spending around two quid a round. As a bonus, the calibre falls just inside the 7000 Joule range limit imposed at Bisley.