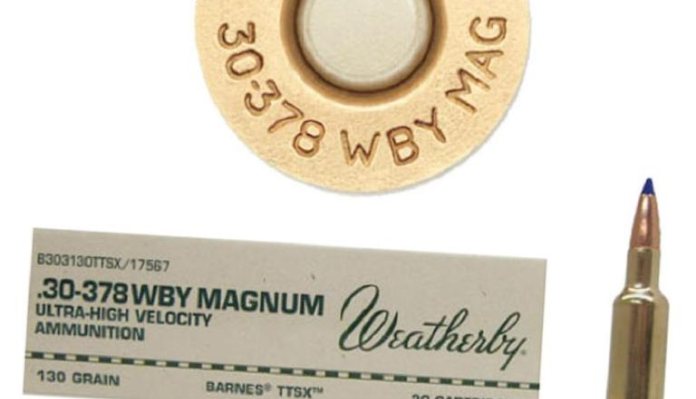 It all started in the late 1950s, when a specialist ammunition wildcatter called Roy Weatherby was approached by the U.S. Army with an unusual request. They asked him if he could develop a small arms cartridge that could deliver a projectile at speeds of greater than 6000 fps. It was their intention to use the design to simulate shrapnel impacts against the best body armour materials and designs of the day.

We know that he achieved the objective, although precise details are still the subject of speculation. What is known, is that he started by basing the case design around his 1953 belted, bottle neck .378 Weatherby Magnum, necking it down to 30 calibre. This being that smallest calibre that could be practically matched with the vast case capacity and propellant types of the day. (A few years later Parker Ackley created the novelty .22 Eargesplitten Loudenboomer, based upon the same platform). Weatherby knew that jacketed bullets would be unsuited to such significant acceleration pressuresand rotational forces, even if the barrel length was considerably extended. So, he turned to Speer for help in producing a range of solids in a number of metals and alloys in weights ranging from 80 to just over 100-grains. The .30-378 Weatherby Magnum had been established.

A wildcat for four decades

Word of the awesome performance of this new cartridge soon percolated though the wildcat community and, within a few years, a ‘civilianised’ version had claimed a number of performance records, including a 3.125”, 9-shot group at 1000 yards. The tenth shot (flyer) opening it up to a figure of 4.375”. Velocities with commercial 165-grain bullets exceeded 3500 fps making this one of the fastest .30 cal cartridges of all time. It took Weatherby until 1996 to respond to the demands of the long range hunting fraternity. Over time, launching a range of three factory loadings.

Still arguably the fastest commercial .30 cal around, the super flat shooting 30-378 Weatherby Magnum really shines at extremeranges. However, good hunting at these distances is often more about the accuracy of the shooter than this cartridge or the firearm. Whilst at greatly reduced ranges, it is sometimes used as ‘overkill’ by those too lazy or too stupid to shoot a more appropriate calibre, that would actually require an allowance for range and trajectory! Fortunately, their reward is a pretty brutal recoil and a throat life measured in just hundreds of rounds.

Being based upon a .30 Cal, home brewers are seemingly spoilt for choice with regard to consumables but in practise this is not the case. In order to optimise the potential performance of the calibre, the range of powders is quite limited. Furthermore, reducing throat erosion requires careful bullet selection. The stiffest spire forms being most desirable. Hornady currently list data for bullets ranging from 165 to 225-grains and make the point about suitable powder types by quoting a 225-grain loading that uses H50BMG propellant, (yes, that’s the one designed for the Browning Machine Gun cartridge). As for the hardware, tools and brass are offered by a number of makers.

So, what to do with it here in the UK? Rather impractical as a hunting cartridge, it still has the potential to realise awesome results as a long range benchrest performer. Just remember; it can bite shooters and eat barrels!