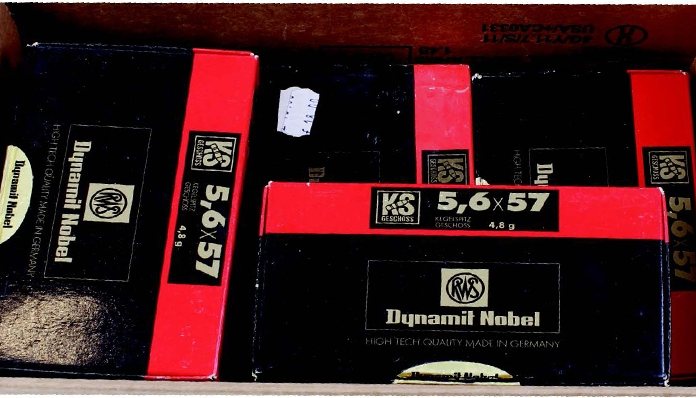 A few ‘new’ commercial cartridge designs fill a gap in the market and become well established on both sides of the pond. Some find niche applications and chug along as commercial novelties, associated with either particular gun or ammunition makers, countries or applications. This month, we look at one of the latter.

Launched in 1964 by RWS, the 5.6x57 (rimless) and 5.6x57R (rimmed) were intended for specific use on Roe Buck and Chamois, as well as fox at up to 250m, so making these calibres almost unique. To further enhance the novelty, it is not unusual for the rifles to be furnished with adaptors to allow them to be used with practice rounds in either .22LR or .22WMR. As a performer, the 5.6x57 RWS is potent, the original 74-grain Cone Point factory load was producing 3400 fps, exceeding the (then) West German ‘Minimum Energy at 200m’ requirement for game hunting. Hirtenberger’s 60-grainer (the only other commercial maker) clocked almost 3600 fps. Reloading data quotes 3700 fps + for 60-grain bullets, figures that take it more than 100 fps higher than the steamy .220 Swift on a pro rata basis.

RWS’s only load is still based upon the 74-grain Cone Point, their website claiming 3,379 fps, and from a 100m zero, a drop of just 7.2cm at 200m. Current reload data claims a stunning 4000+ fps from 50-grain V-MAX style pills. However, the reloading qualities of the cartridge are not the best. The internal capacities of the two variants are more or less identical and give little hint of the challenges on the bench. A feature of the design was the need to function safely within chambers machined for use with inserts. The result is a case with increased body and neck wall thickness. Lighter loads can therefore fail to fully expand the neck, as evidenced by propellant residues on the outside of the fired brass. Subsequent attempts to resize the neck often failing to find any resistance! Indeed, efforts to seat the new pill may require slight neck belling as the ONLY case resizing operation.

Once fired brass will either be vintage Hirtenberger (they no longer offer it) or RWS. New unfired brass is listed by Arms24 in Germany. Stock dies can be obtained from Hornady or special order from RCBS/ Huntington, Group G, #56075 with shell holders 3 and 11. IMR 4350 and 4320 seem to be the ‘go-to’ propellants. Pills in .224 abound but consideration should be given to the fast 1 in 10 default twist of rifles in this calibre. Hornady warn against the use of their SX range because of the risk of blow-ups from thin walled designs at such high rotational rates, but the warning applies to all comparable makes of pill.

Whilst it would serve as a light game round for Chinese Water Deer, Muntjac or Roe in Scotland, there are many better and easier options in terms of use and reloading. On the range, it’s bloomin’ hot and remarkably flat but not a contender for BR. The collector/shooter would find many of the rifles of more interest than the cartridge, given that many come with a suite of inserts. The rimmed variant requiring the use of hard to find and peculiarly European break-barrel designs. For the rimless option, bolt action rifles include Krico, Mannlicher Schonauer, Steyr Mannlicher, as well as customised Browning’s and Mausers.